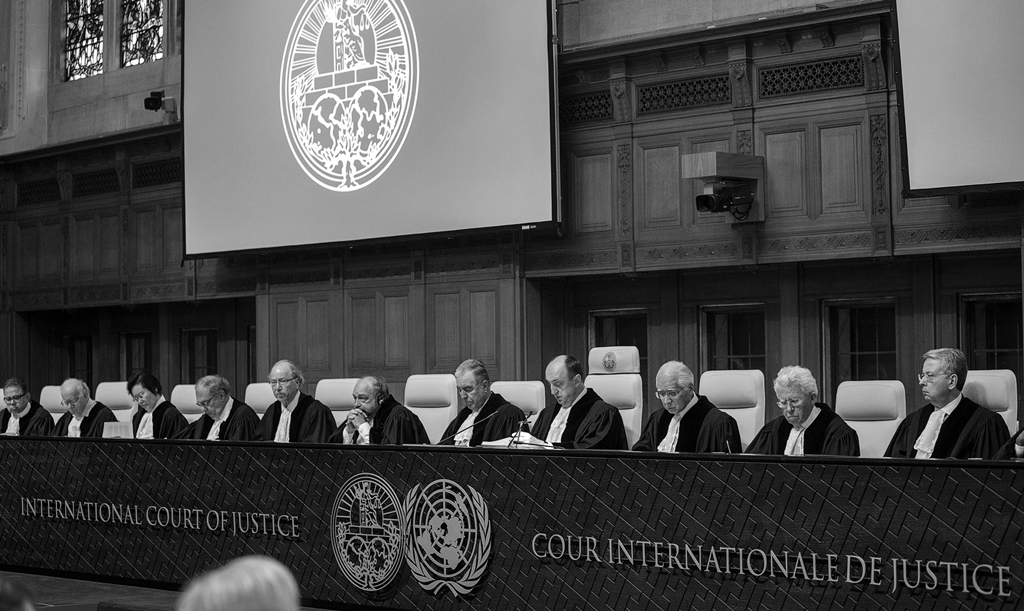 As per Article 93 of the UN Charter, all 193 UN members are automatically parties to the court’s statute. Non-UN members may also become parties to the court’s statute under the Article 93(2) procedure. For example, before becoming a UN member state, Switzerland used this procedure in 1948 to become a party, and Nauru became a party in 1988. Once a state is a party to the court’s statute, it is entitled to participate in cases before the court. However, being a party to the statute does not automatically give the court jurisdiction over disputes involving those parties. The issue of jurisdiction is considered in the three types of ICJ cases: contentious issues, incidental jurisdiction, and advisory opinions.

Only States (States Members of the United Nations and other States which have become parties to the Statute of the Court or which have accepted its jurisdiction under certain conditions) may be parties to contentious cases.

The Court is competent to entertain a dispute only if the States concerned have accepted its jurisdiction in one or more of the following ways:
• by entering into a special agreement to submit the dispute to the Court;
• by virtue of a jurisdictional clause, i.e., typically, when they are parties to a treaty containing a provision whereby, in the event of a dispute of a given type or disagreement over the interpretation or application of the treaty, one of them may refer the dispute to the Court;
• through the reciprocal effect of declarations made by them under the Statute, whereby each has accepted the jurisdiction of the Court as compulsory in the event of a dispute with another State having made a similar declaration. A number of these declarations, which must be deposited with the United Nations Secretary-General, contain reservations excluding certain categories of dispute.

States have no permanent representatives accredited to the Court. They normally communicate with the Registrar through their Minister for Foreign Affairs or their ambassador accredited to the Netherlands. When they are parties to a case before the Court they are represented by an agent. An agent plays the same role, and has the same rights and obligations, as a solicitor or avoué in a national court. However, since international relations are at stake, the agent is also as it were the head of a special diplomatic mission with powers to commit a sovereign State. He/she receives communications from the Registrar concerning the case and forwards all correspondence and pleadings, duly signed or certified, to him. In public hearings the agent opens the argument on behalf of the government he/she represents and lodges the submissions. In general, whenever a formal act is to be done by the government represented, it is done by the agent. Agents are sometimes assisted by co-agents, deputy agents or assistant agents and always have counsel or advocates, whose work they co-ordinate, to assist them in the preparation of the pleadings and the delivery of oral argument. Since there is no special International Court of Justice Bar, there are no conditions that have to be fulfilled by counsel or advocates to enjoy the right of pleading before it, the only exception being that they must have been appointed by a government to do so.

Proceedings may be instituted in one of two ways:
• Through the notification of a special agreement: this document, which is bilateral in character, can be lodged with the Court by either or both of the States parties to the proceedings. A special agreement must indicate the subject of the dispute and the parties thereto. Since there is neither an “applicant” State nor a “respondent” State, in the Court’s publications their names are separated by an oblique stroke at the end of the official title of the case, e.g., Benin/Niger.
• By means of an application: the application, which is unilateral in character, is submitted by an applicant State against a respondent State. It is intended for communication to the latter State and the Rules of Court contain stricter requirements with regard to its content. In addition to the name of the party against which the claim is brought and the subject of the dispute, the applicant State must, as far as possible, indicate briefly on what basis – a treaty or a declaration of acceptance of compulsory jurisdiction – it claims that the Court has jurisdiction, and must succinctly state the facts and grounds on which its claim is based. At the end of the official title of the case the names of the two parties are separated by the abbreviation v. (for the Latin versus), e.g., Nicaragua v.Colombia.

The date of the institution of proceedings, which is that of the receipt by the Registrar of the special agreement or application, marks the opening of proceedings before the Court. Contentious proceedings include a written phase, in which the parties file and exchange pleadings containing a detailed statement of the points of fact and of law on which each party relies, and an oral phase consisting of public hearings at which agents and counsel address the Court. As the Court has two official languages (English and French), everything written or said in one language is translated into the other. The written pleadings are not made available to the press and public until the opening of the oral proceedings, and only then if the parties have no objection.
After the oral proceedings the Court deliberates in camera and then delivers its judgment at a public sitting. The judgment is final, binding on the parties to a case and without appeal (at the most it may be subject to interpretation or, upon the discovery of a new fact, revision). Any judge wishing to do so may append an opinion to the judgment.

By signing the Charter, a Member State of the United Nations undertakes to comply with the decision of the Court in any case to which it is a party. Since, furthermore, a case can only be submitted to the Court and decided by it if the parties have in one way or another consented to its jurisdiction over the case, it is rare for a decision not to be implemented. A State which considers that the other side has failed to perform the obligations incumbent upon it under a judgment rendered by the Court may bring the matter before the Security Council, which is empowered to recommend or decide upon measures to be taken to give effect to the judgment.

The procedure described above is the normal procedure. However, the course of the proceedings may be modified by incidental proceedings. The most common incidental proceedings are preliminary objections, which are raised to challenge the competence of the Court to decide on the merits of the case (the respondent State may contend, for example, that the Court lacks jurisdiction or that the application is inadmissible). The matter is one for the Court itself to decide. Then there are provisional measures, interim measures which can be requested by the Applicant State if it considers that the rights that form the subject of its application are in immediate danger. A third possibility is that a State may request permission to intervene in a dispute involving other States if it considers that it has an interest of a legal nature in the case, which might be affected by the decision made. The Statute also makes provision for instances when a respondent State fails to appear before the Court, either because it totally rejects the Court’s jurisdiction or for any other reason. Failure by one party to appear does not prevent the proceedings from taking their course, although the Court must first satisfy itself that it has jurisdiction. Finally, should the Court find that parties to separate proceedings are submitting the same arguments and submissions against a common opponent in relation to the same issue; it may order the proceedings to be joined.

The Court discharges its duties as a full court but, at the request of the parties, it may also establish ad hoc chambers to examine specific cases. A Chamber of Summary Procedure is elected every year by the Court in accordance with its Statute.
The sources of law that the Court must apply are: international treaties and conventions in force; international custom; the general principles of law; judicial decisions; and the teachings of the most highly qualified publicists. Moreover, if the parties agree, the Court can decide a case ex aequo et bono, i.e., without confining itself to existing rules of international law.
A case may be brought to a conclusion at any stage of the proceedings by a settlement between the parties or by discontinuance. In case of the latter, an applicant State may at any time inform the Court that it does not wish to continue the proceedings, or the two parties may declare that they have agreed to withdraw the case. The Court then removes the case from its List.

The United Nations General Assembly and Security Council may request advisory opinions on “any legal question”. Other United Nations organs and specialized agencies which have been authorized to seek advisory opinions can only do so with respect to “legal questions arising within the scope of their activities”.
When it receives a request for an advisory opinion the Court must assemble all the facts, and is thus empowered to hold written and oral proceedings, similar to those in contentious cases. In theory, the Court may do without such proceedings, but it has never dispensed with them entirely.

A few days after the request has been filed, the Court draws up a list of the States and international organizations that are likely to be able to furnish information on the question before the Court. Such States are not in the same position as parties to contentious proceedings: their representatives before the Court are not known as agents, and their participation in the advisory proceedings does not render the Court’s opinion binding upon them. Usually the States listed are the member States of the organization requesting the opinion. Any State not consulted by the Court may ask to be.

Advisory proceedings conclude with the delivery of the advisory opinion at a public sitting.
Such opinions are essentially advisory; in other words, unlike the Court’s judgments, they are not binding. The requesting organ, agency or organization remains free to give effect to the opinion as it sees fit, or not to do so at all. However, certain instruments or regulations provide that an advisory opinion by the Court does have binding force (e.g., the conventions on the privileges and immunities of the United Nations).

Nevertheless, the Court’s advisory opinions are associated with its authority and prestige, and a decision by the organ or agency concerned to endorse an opinion is as it were sanctioned by international law.