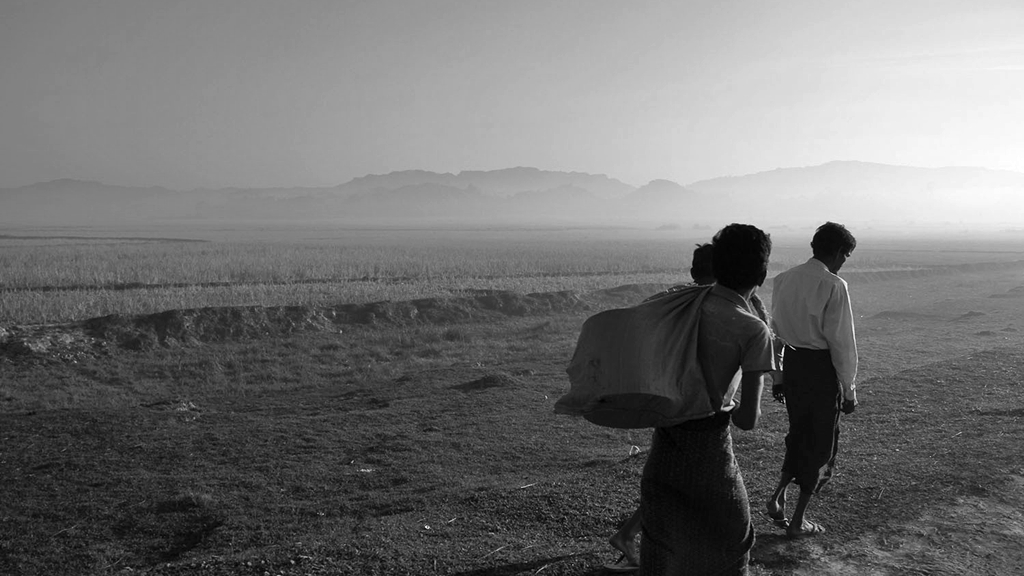 Rohingyas are descended from local indigenous tribes who lived in Arakan since the dawn of history. They trace their ancestry to Arabs, Moors, Pathans, Moguls, Bengalis and some Indo-Mongoliod people. They are living in Arakan generation after generation for centuries after centuries and their arrival in Arakan has predated the arrival of many other peoples and races now residing in Arakan and other parts of Burma. Early Muslim settlement in Arakan dates back to 7th century AD. They developed from different stocks of people and concentrated in a common geographical location from their own society with a consolidated population in Arakan well before the Burman invasion in 1784.

The influence and power of the Muslims grew in Arakan to the extent of forming their own administrative system. There were Muslim rulers, nobles, Qazis, scholars, generals and poets etc. who developed the country’s administration, shaped a healthy socio-cultural life of the people, encouraged the growth of Islamic culture and civilization and replaced Muslim heritage in Arakan.

The Muslims of Arakan over the centuries have had many terms by which to identify themselves, including the terms Rakhine Muslim, Arakan Muslim, and Rohingya, the last of which has become more prominent in recent times.

The Muslims of Arakan called their country, in their own language, ‘Rohang or Roang’ and called themselves as Rohangya (Rohang+ya) or Roangya (Roang+ya) means native of Rohang or Roang. In Burmese it is ‘ရိုဟင္ဂ်ာ’, in Rakhine’s pronunciation it will read as ‘Rohongya’ but in Burmese pronunciation it became ‘Rohingya’ and now it’s established as ‘Rohingya’. Like other peoples of the world, they have needed to identify as Rohingya to some degree for centuries.

The term Rohingya was not new and this term was in used for three hundred years. The first known record of a very similar word to Rohingya used to refer to the Muslim inhabitants of Arakan is to be found in an article about the languages spoken in the “Burma Empire” published by the Scottish physician Francis Buchanan in 1799. He wrote: “I shall now add three dialects, spoken in the Burma Empire, but evidently derived from the language of the Hindu nation. The first is that spoken by the Mohammedans, who have long settled in Arakan, and who call themselves Rooinga, or natives of Arakan.”

In the work of Arab geographer Rashiduddin (1310 AD) Arakan appears as ‘Rahan or Raham’. The British travelers Relph Fitch (1586 AD) referred the name of Arakan as ‘Rocon’. In the Rennell’s map (1771 AD), it is ‘Rassawn’. Tripura Chronicle Rajmala mentions as ‘Roshang’. In the medieval works of the poets of Arakan and Chittagong, like Quazi Daulat, Mardan, Shamser Ali, Quraishi Magan, Alaol, Ainuddin, Abdul Ghani and others, they frequently referred to Arakan as ‘Roshang’, ‘Roshanga’, ‘Roshango Shar’, and ‘Roshango Des’. Famous European traveler Francis Buchanam (1762-1829 AD) in his accounts mentioned Arakan as “Rossawn, Rohhawn, Roang, Reng or Rung”. In one of his accounts, “A Comparative Vocabulary of some of the languages spoken in the Burman Empire” it was stated that, “The first is that spoken by the Mohammedans, who have long settled in Arakan, and who call themselves Rooinga, or natives of Arakan.” . The Persians called it ‘Rekan’.” The Chakmas and Saks from 18th century called it ‘Roang’.

However, the successive Burmese regimes always tried to reject, to deny and to defiant the term ‘Rohingya’. They claim that, the Rohingya ethnicity is not real and was invented recently out of blue. There were/are no Rohingya in Burma. Moreover, many Rakhine nationalist claims that, the term Rohingya was created in the 1950s to promote the political demands of the Bengalis in Myanmar.

Ethnic identity is not a God-given thing, but different forms of identities are invented and reworked thorough space and time. That’s why the process of identity formation is known as ‘social construction’. And Ethnicity is not just a ‘thing’ but also a ‘process’ in which the state actors impose identities, and the people themselves actively articulate their own identities for the sake of political and material livelihood.

As Burma and Arakan state are the products of the nation-sate formation through a relatively long, history, The name ‘Rakhne’ and the place ‘Arakan’ have been “invented” at particular points of time, just like the name “Rohinggya’ was invented another points of time. If Rohingya ‘migrated’ from Bangladesh of somewhere else at one historical point of time Rakhines must have ‘migrated’ at similar or another historical points of time. But immigrating earlier of later does not negates the problematic reality that both groups have migrated from somewhere else. None of these groups fell from the sky. The claim that the name ‘Rohingya’ is invented is unacceptable and completely contradicts the very foundational understanding of ethnicity and ethnic identity.

Dr. Michael W. Charney, School of Oriental and African Studies (SOAS), University of London, tentatively suggests that, “The Rohingya identity is not more “artificial” or “invented” than any other, but the story of its ethno genesis does not fit easily in the all too narrow concept of “national races” as is currently understood in Burma: ethnic groups which were already fully formed as we know them now in pre-colonial times.”

He also suggests that “Rohingya may be a term that had been used by both Hindu and Muslim Bengalis living in Rakhaing [Arakan] since the sixteenth century, either as resident traders in the capital or as war captives resettled in the Kaladan River Valley.” ——— “Rohingya and Rakhaing [Rakhine] were not mutually exclusive ethnonyms. Rakhaing’s topography may have led to Rohingya and Rakhaing emerging as separate versions of the same term in different geographical contexts that came, in the eighteenth century to be associated closely with the predominant religious makeup of the local area concerned.”

He further pointed out that, “The evidence available shows that the term Rohingya was not widely used to describe a distinct ethnic group until the twentieth century. I would argue that the explanation for this is as simple as that there was no reason for the Rohingya to distinguish themselves in such a manner until the rise in Burma of the Bamar and other ethno-nationalisms against British colonialism.

The beginnings of the Burmese nationalist movement were strongly Buddhist in character, and some of the first nationalist leaders were monks. Thus, Burmese nationalism acquired a religious hue from the beginning. On the other hand, the Burmese have always viewed Indians with suspicion, and particularly Muslims. At that time, the general public did not distinguish much between Burmese Muslims and Indian Muslims, so Burmese Muslims felt they needed to distance themselves from Indian Muslims throughout the country.

The tensions between Buddhists and Muslims in Arakan, which had been mounting during colonial times, came to a head in the Second World War. When the British retreated to India and the Japanese advanced in Arakan, the Rakhine Buddhists sided mostly with the Japanese and the Burmese Independence Army of Aung San, while the Muslims were armed by the British; but the conflict soon turned into a civil war between Muslims and Buddhists. When the war ended, the north was mainly Muslim, the south was mainly Buddhist, and the communal divisions reached a point of no return.

Anti-Rohingya discourses often recall the Mujahid insurgency that took place in Arakan during the fifties. As the goal of some of the insurgents was the annexation of northern Arakan by East Pakistan, Rohingya are accused of disloyalty to the Burmese State. But there was scarcely any popular support for the rebellion, and many of its victims were Rohingya. In fact, some Rohingya leaders demanded U Nu to provide them with weapons in several occasions, a demand which was never met.

Meanwhile in Rangoon, Rakhine nationalists were pushing for a separate Arakan State, while Rohingya politicians, wary of their Rakhine neighbors after the Second World War sectarian violence, demanded a separate region in the north for them ruled directly by Rangoon. And during the Parliamentary period (1948-1962) and the first years of Ne Win’s dictatorship, there were not only many Rohingya organizations, both in Arakan and Rangoon, but the government recognized Rohingya as a Burmese ethnic group.ent of Ne Win and its military successors who denied Rohingya their rights and began to persecute them, from the mid-seventies until now. And it can be argued that, paradoxically, nothing has done more to reinforce the Rohingya identity than the attempts to suppress it.

There is no historical precedent for an independent political entity for Burma as it exists now, and the different groups that make up the complex ethnic tapestry of Burma were never under the authority of a single government before the arrival of the British. Like many other post-Colonial countries, Burma emerged from British rule as a country deeply divided along ethnic and sectarian lines.

The Baman was in some ways an underprivileged group during the colonial era but, after turning the tables in the Second World War, since independence it has become the privileged group. As a result of these competing nationalisms and the repeated attempts of the Baman majority to impose its centralized vision of a Nation-State, the Burmese state has failed to generate a supra-national identity powerful enough to include and transcend the several ethno-nationalisms that awoke during colonial times.

The Rohingya identity is not more “artificial” or “invented” than any other, but the story of its ethno-genesis does not fit easily in the all too narrow concept of “national races” as is currently understood in Burma: ethnic groups which were already fully formed as we know them now in pre-colonial times. Others would also fail the test, because the test itself stems from a misunderstanding of ethnicity and group formation, but it is the political context that has determined that the Rohingya, and the Rohingya alone, should fail it. Their mere existence as a people is a serious challenge to the weak mainstream historical narrative imposed by the military regime.

The Rohingya’s cultural, religious and linguistic differences, has made them expedient scapegoats in the context of a failed process of nation-building. Nothing glues together a divided community more than a common threat, real or imagined, and nothing has united the Rakhine and the Baman more than identifying the Rohingya as their common enemy. The consequence is a campaign of ethnic cleansing that has been going on for decades. In this situation, it would be very naïve to believe that they are suffering such persecution because they have choose to call themselves Rohingya, a claim for ethnicity that they have as much right to make as any other community in Burma, instead of accepting the designation “Bengalis” enforced by the Burmese regime.

If, as Mr. Derek Tonkin claims, the word Rohingya “is offensive to many Burmese,” that tells us more about those Burmese than about the Rohingya themselves. Burmese define themselves and what it means to be Burmese in the very act of exclusion. What is at stake in the way that the Burmese nation treats and identifies the Rohingya and other Muslim communities is not only the future of those communities, but also the kind of Burma that the Burmese want to build for themselves.”