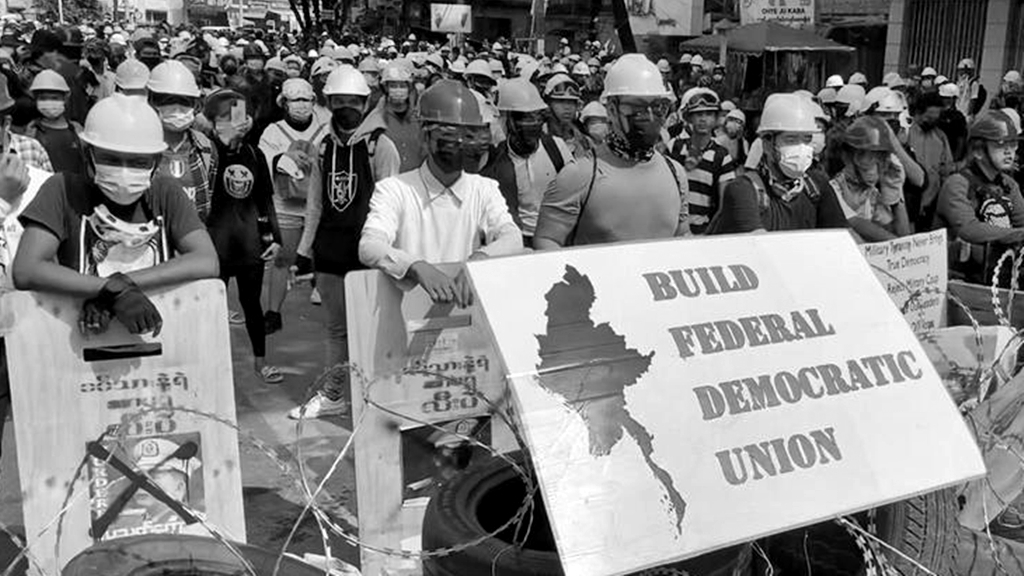 The Union of Burma was born on 4th January 1948 out of the joint efforts of all peoples of the country, on the basis of the Panglong Agreement signed on 12th February 1947 between General Aung San and leaders of ethnic nationalities to take independence together. The effort and contribution of every people, big or small, was equally important and great. Thus, the spirit of Panglong is very important for the perpetuation of a strong and stable Union of Burma. The Panglong Agreement was a Union Treaty to build an independent Burma — a Federal Union based on the agreed-upon principle of “unity in diversity”. Unity in diversity means the people are different from one another. Their languages are different, their cultures are different, their religions are different, and their lifestyles are different. But they are all united to establish a union for a common purpose, for the common good, for sustainable development, and, above all, for the future of their people. “This Panglong Agreement assured the people of Burma of federal democracy, human rights, and equality.

Unfortunately, a few months before Burma’s independence, General Aung San and almost all of his cabinet members were assassinated. Then, the Union of Burma was formed on the foundation of the 1947 semi-federal Constitution. And the rights the ethnic states which were granted were nominal than real.

The identities and equality of the ethnic people have slowly eroded away. Nationalism, Burman control, and Buddhism have continued to be essential elements of political legitimacy and the endeavor to create national identity under all regimes. Almost immediately upon the independence, Burma was thrown into a series of brutal ethnic wars that have continued with varying intensity to this day. Thus, the Union of Burma today is facing an unprecedented crisis- economic, social and political. Even the survival of the Union is also at stake.

The crisis in the Union of Burma today is rooted in a political problem, especially a constitutional one that rooted in the question of self-determination for non-Burman nationalities. Thus, these differences can be resolved through political means and through the political process, i.e., through political dialogue, negotiations and compromise, and through establishing a genuine Federal Union of Burma, which will guarantee democratic rights for all citizens, political equality for all nationalities and the rights of self-determination for all member states of the Union. A federal system that combines and balances between “self-rule” for ethnic national homelands and a “shared-rule” for the Union is a federal system.

General Aung San was a visionary leader who fully understood and accepted the aspirations of all the peoples of Burma including non-Burmans. The Union of Burma would not have been created without him. However, his assassination ended the vision he had.

The Committee Representing Pyidaungsu Hluttaw (CRPH) on March 31 issued a ‘Federal Democracy Charter’ and also announced the annulling of the 2008 Constitution. According to CRPH, the charter was drafted and approved by at least four groups, including elected lawmakers and political parties, CDM (civil disobedience movement)/strike leaders, protest leaders, and civil society organizations representing women and youth.

The CRPH has also announced plans to set up a national unity government (NUG) in the first week of April to work on eliminating the dictatorship and drafting a new Constitution. A National Unity Consultative Council (NUCC) will be formed based on those four groups. The NUG in consultation with the NUCC will implement the political roadmap outlined in the Federal Democracy Charter.

It will work to overthrow the junta by using all means: politically, economically, socially, via foreign affairs, through diplomacy, defense and security, according to the Charter.

The Charter outlined initial agreements on establishing a federal democratic union and interim constitutional arrangement before the country adopts a new Constitution that can guarantee equality and autonomy through a national referendum.

All the Rohingya people support the announcement of the CRPH which abolishes the 2008 Constitution and its Federal Democratic Charter. The principles of the charter reflect the long-standing demands of ethnic minorities”.

The Rohingya people strongly believe that in order to establish a stable, peaceful and prosperous nation, the process of rebuilding the Union must be based on a federal democratic process. They also believe that all political and democratic processes in Burma should be all-inclusive, and the Rohingya should be part of it. Time has come to practically revive and strengthen the Panglong spirit of ‘unity in diversity’ and diversity is strength, not weakness.

The Rohingyas, firmly believe that:

The ethnic Rohingya is one of the many nationalities of the Union of Burma. They are fighting for their very survival as a people. They are struggling for their “Rights of self-determination”: which will guarantee their collective rights; the right to rule their homeland by themselves, the right to practice their religious teaching and culture freely, the right to teach, learn and promote their language freely, and the right to uphold their identity without fear and live peacefully together with others.

They, therefore, claims that the ultimate goal of their struggle is to establish the genuine Federal State of Burma, which will guarantee democratic rights for all citizens, political equality for all nationalities and the rights of self-determination for all member states of the Union including the ethnic Rohingya.