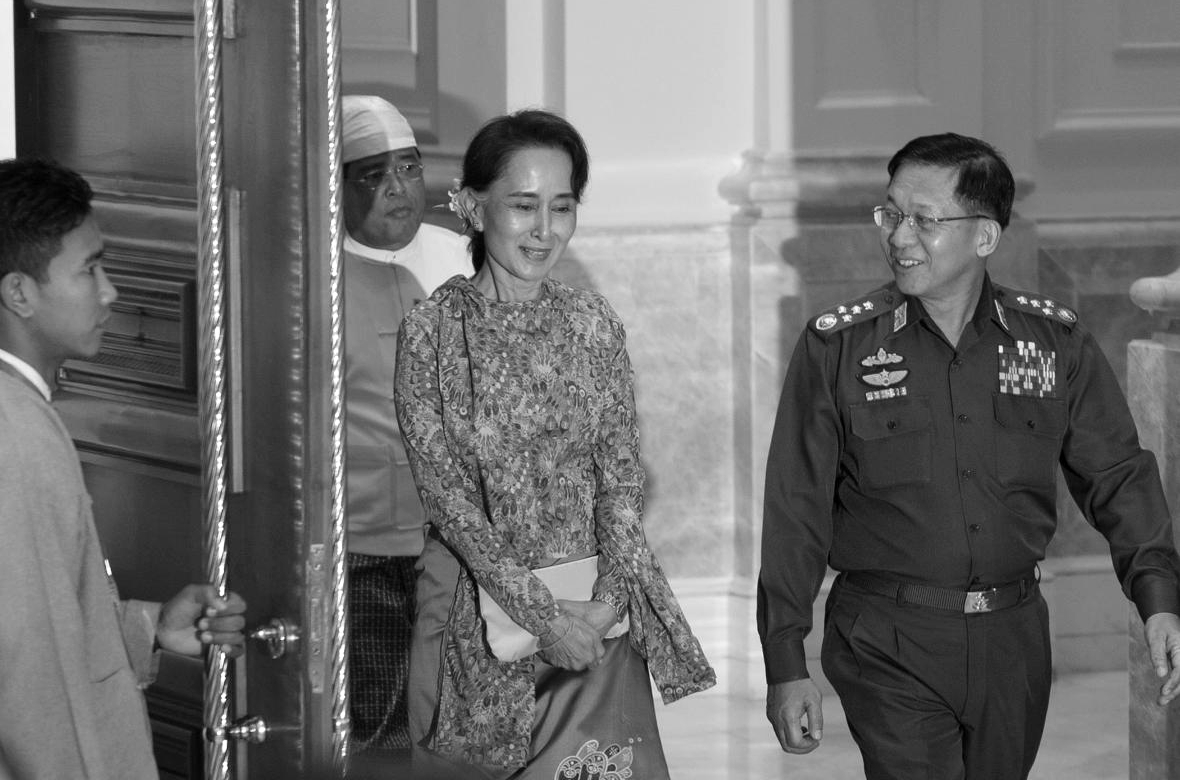 The United Nations will establish an international investigation into human rights abuses in Rakhine State, the Human Rights Council agreed Friday, on 24 March, in Geneva.

The council’s 47 members resolved without vote to launch the fact-finding mission and renew the annual mandate of Ms Yanghee Lee, the UN’s special rapporteur for human rights in Myanmar.

The international investigation was included in a European Union-sponsored resolution on Myanmar’s human rights record that was approved on Friday, the final day of the Human Rights Council session.

Some council members had pushed for a UN Commission of Inquiry into allegations of abuses in northern Rakhine State, while China and India had opposed an international investigation altogether and distanced themselves from the final resolution.

But Burmese ambassador Htin Lynn, speaking before the decision was taken by consensus, rejected the move as “not acceptable.” Burma’s national investigative commission had just interviewed alleged victims who fled to Bangladesh and would issue its findings by August, he said. He further said that, “Such kind of action is not acceptable to Myanmar as it not in harmony with the situation on the ground and our national circumstances. Let the Myanmar people choose the best and the most effective course of action to address the challenges in Myanmar.”“We will be doing what needs to be done and we will do it with great prudence and probity,” he added.

At the same time Presidential office and Foreign Mystery rejected the resolution saying that they are doing their best and the investigation task are going on by the national investigation commission led by Vice President Myint Swe. The commission’s formal report is not still coming out. They will not accept that fact-finding mission.

So what is that so called national investigation Commission?

On 1 December 2016, Myanmar’s President Htin Kyaw established a 13-member investigation commission led by Vice-President Myint Swe, a former army general, to probe “the truth” in relation to violent attacks that occurred on 9 October and 12-13 November 2016 in Maungdaw Township. Its members include the current Chief of Police and a number of former government officials.

On January 3, the commission released an “Interim Report” based on a three–‐‑day visit to Rakhine State. The report cited ongoing investigations into allegations of rape, illegal rests, torture, and destruction of property, but failed to present any findings concerning these violations. Instead, the report cited the presence of “Bengalis” and mosques in the region as evidence that persecution and “genocide” were not occurring. It repeated the claims of security forces that they were “ready to take legal action against those who committed crimes if there was sufficient evidence” and cast doubts on the claims of survivors by citing “potential conditions of fabricated rumors and news regarding the events.”

The panel also said it had so far found “insufficient evidence” for legal action on allegations of rape by soldiers. “No cases of malnutrition were found in the area, due to the area’s favorable fishing and farming conditions,” it added, despite concerns from international aid organizations that tens of thousands of people who were receiving food aid before Oct. 9 are now cut off.
Rohingya refugees in Bangladesh, who had fled across the border after security operations, began last year, this week told the Dhaka Tribune that representatives of the state assembly’s Maungdaw Investigation Commission had called them liars and refused to listen to their testimony.

The Myint Swe Commission was due to submit its final report on January 31,but the government extended the deadline indefinitely after the commission requested additional time to conduct its investigation. Fortify Rights received credible information that suggests the delay was intended to prevent the establishment of Commission of Inquiry or similar mechanism at the 34th session of the Human Rights Council this month.

Who is Myint swe?

Myint Swe, 65, is a graduate of the 15th intake of Myanmar’s Defense Services Academy (DSA) in 1971. He rose to the rank of Quartermaster-General in 2009, the fifth-most senior position in the Myanmar Armed Forces’ chain of command, which placed him directly under the command of former junta leader Senior General Than Shwe.

He carefully executed two high-profile operations in Rangoon—the arrest of Gen Ne Win’s family members in 2002 after an alleged coup conspiracy was uncovered and the arrest of the then intelligence chief and Prime Minister Gen Khin Nyunt at Rangoon Airport in 2004. A 2006 US Embassy cable released by Wikileaks said, Myint Swe was placed on a US Treasury sanctions list for Specially Designated Persons for his role in the crackdown.

He was the most responsible person in the crackdown of 2007 saffron revolution. . Myint Swe was military commander of Yangon Region and oversaw the deployment of soldiers to violently clear protesters from the streets of Myanmar’s biggest city. Before the crackdown, he had been functioning as “Than Shwe’s eyes and ears” in Yangon, During that crackdown 32 people, including Buddhist monks, were gunned down on Yangon streets.

On 22 September 2007, thousands of barefooted monks chanting the Metta Sutta, a prayer of love and compassion, marched in cities across Burma including Rangoon and Mandalay , calling for an improvement in public well-being in the face of the growing economic hardships afflicting Burma’s Buddhists. Ten thousand monks took to the streets in Mandalay alone, the second largest city in Burma. In Rangoon, monks chanting the Metta Sutta, a prayer of kindness and compassion, marched to the home of Daw Aung San Suu Kyi to honor the democracy leader. Daw Suu Kyi appeared before the monks and shed tears of gratitude. This peaceful uprising was known as, “the Saffron Revolution,” named after the color of monks’ robes.

On the 26th of September, the landmark Shwedagon Pagoda was barricaded by troops, and a curfew was imposed by the military dictators. During the night, soldiers raided dozens of monasteries across Burma, beating and killing monks according to eyewitness accounts.

Unfazed by the night raids and the rumors of arrest, on the morning of September 27th, 50,000 courageous citizens gathered on the streets of Rangoon to demand freedom from fear. Soldiers opened fire on the crowds, killing at least nine unarmed protesters including Kenji Nagai, a Japanese journalist.

With each passing hour, more monks were detained as more soldiers filled the streets. The Burmese junta shut down internet and cell phone service to stifle the flow of information to the outside world. Even so, accounts emerged of a crematorium burning day and night to destroy evidence of military brutality. A Burmese colonel defected after refusing an order to slaughter hundreds of monks.

According to the website of Bangkok-based NGO ALTSEAN, in April 2008, Myiny Swe informed to the concerned public and senior government officials the detail of the junta’s plan for rigging the May 2008 constitutional referendum including to announce the only final results from Naypyidaw rather than local tallies. He was also involved in distributing humanitarian aid to victoms of Cyclone Nargis in 2008. The ALTSEAN website says, before distributing aid to survivors the SPDC first plastered the boxes with the names of top generals as an act of propaganda exercise. The State-run television continuously ran images of top generals handing out boxes of aid to survivors elaborate ceremonies. One box bore the name of Myint Swe in bold letters that overshadowed a small label reading, ‘Aid from the Kingdom of Tailand’.

At the start of Myanmar’s democratic transition in 2010 he shed his uniform to join the USDP and become Yangon Region chief minister.

In 2012 Myint Swe was proposed as a vice-presidential candidate but was dropped after it emerged his son-in-law had Australian citizenship. Reuters has quoted sources saying the man has since renounced his Australian passport and taken Myanmar nationality.

After the anti-Muslim violence in Arakan in 2012, Myint Swe warned the journalists not to use inflammatory languages that could lead to the instability in the state and threatened transgressors with up to nine years imprisonment under Section 5 (j) of Emergency Provisions ACT and Section 505 (b) of Burmese Penal Code.

How far is the commission credible?

The committee’s composition and mandate raised serious doubts that it would conduct a thorough and impartial investigation into alleged abuses. The commission has faced opposition from across the spectrum since it was announced last month. Rights activists dismissed the 13-member commission as toothless; pointing out it is headed by the vice-president, a former army general. Rakhine nationalists and many of the state’s MPs have denounced it as a tool for government propaganda.

Two high–‐‑level U.N. Special Advisors raised concerns about the composition, mandate, and credibility of the Myint Swe Commission. Human rights organizations, including Fortify Rights, also roundly panned its independence and methodology. The performance of the commission to date underscores these concerns.

Chris Lewa, from the Arakan project, said the commission had failed to properly investigate the widespread allegations of rape and rights abuses. “The methodology is not credible, it’s totally unprofessional,” she said. “There is no corroboration from the villagers they are meant to have talked to. Their job was to verify the allegations and the report has not verified them.”

Phil Robertson, deputy Asia director at New York-based Human Rights Watch, said the panel was “looking more and more like the Myanmar government whitewash mechanism that we feared it would be,” highlighting that the panel chair Vice President Myint Swe, is a former army lieutenant general.

Robertson said it was “astonishing” that the commission could conclude from the presence of mosques that the Rohingya are not being persecuted. “Judging by what is written in this interim report, the commission has so far acted to discount out of hand what it calls ‘external allegations’ rather than seriously investigate them and risk uncovering the litany of rights violations against the Rohingya,” he said by email. “The army has committed atrocity crimes and this commission is attempting a whitewash. Ministries led by Suu Kyi have charted the path of denial, waging a shameful propaganda campaign,” Smith said by email.

Since October 2016, four official commissions have been set up to investigate the situation in Rakhine State. Regrettably, all of them lack the independence, impartiality, human rights and technical expertise, and mandate necessary to conduct a credible and effective investigation. The need for an international investigation is clear in light of the government’s continued failure to carry out credible investigations of its own.