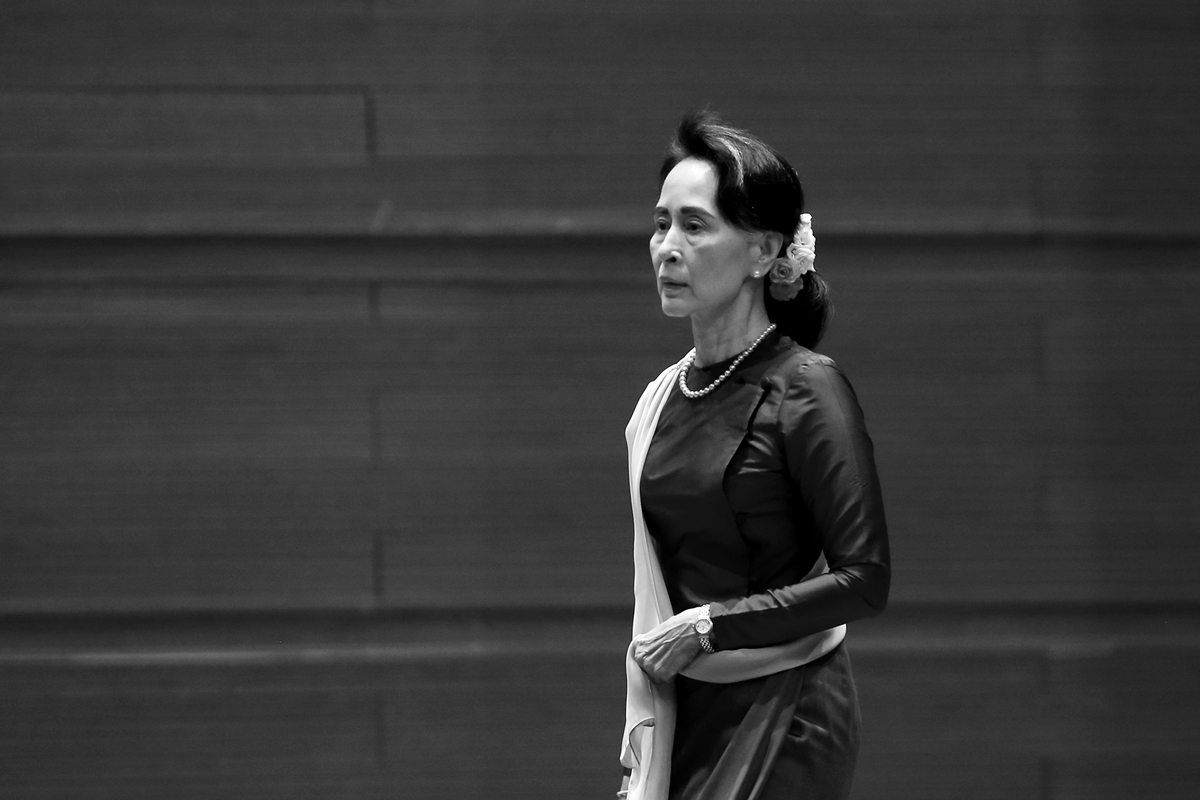 Aung San Suu Kyi received nearly 150 awards and honorary degrees in 1990 and the Nobel Peace Prize in 1991. In its citation the Norwegian Nobel Committee stated that in awarding the prize to Aung San Suu Kyi it wished ‘to honour this woman for her unflagging efforts and to show its support for the many people throughout the word who were striving to attain democracy, human rights and ethnic reconciliation by peaceful means.’

Vaclav Havel, the president of Czechoslovakia, wrote in his foreword letter to the first edition of Suu Kyi’s ‘Freedom for fear’ that, “Aung San Suu Kyi has been received the Nobel Peace Prize and now internationally recognized for her struggle against tyranny for freedom and dignity. …. Aung San Suu Kyi is not only speaking out for justices in her own country, but also for all those who want to be free to choose their own destiny. ….. Aung San Suu Kyi cannot be silenced because she speaks the truth and because her words reflect basic Burmese and universal concepts. .. The Nobel Peace Prize awarded to this brave woman makes clear that she speaks for all of us who search for justice. ”

However, according to Mary Scully, a long-time activist in the labour, socialist, and social movements, “Aung San Suu Kyi rose to the stature of human rights goddess in 2012 when she was finally able to leave Myanmar for Norway to pick up the Noble Peace Prize awarded her in 1991. In her acceptance speech, she spoke of her Buddhist commitment to nonviolence, of solidarity with those suffering injustice, of the corrupting influence of fear in standing against repression and the power of human kindness. That was also the year the military junta unleashed a wave of terror and ethnic cleansing against Rohingya Muslims in Arakan state.”

“The 2012 campaign forced tens of thousands of Rohingya to flee for their lives to Bangladesh or across the Andaman Sea to Thailand. The Rohingya genocide became internationally infamous when Bangladesh closed its borders and refused entry and when Thailand took unsound boats of refugees out to sea and abandoned them. When again in 2015 thousands of Rohingya were stranded in boats off Thailand and Indonesia, not allowed to land, the plight of Rohingya became an international human rights cause.”

“Through all this, Suu Kyi remained in silent collusion or spoke in equivocations but now openly sides with the junta against the Rohingya.”

Mary Scully further wrote that:-
“News about the apartheid conditions and squalid concentration camps in Arakan for the Rohingya displaced by the 2012 violence began to snap many out of their adulation to ask why Suu Kyi, the exemplar of human rights compassion and courage, was as silent as a block of cement about the persecution of the Rohingya. When asked about it, Suu Kyi would speak in evasive abstractions about the “rule of law” to suggest lawless rampaging among Rohingya. She more often dropped the Buddhist shtick to make clear that she rejected the notion of persecution and violence against Rohingya; she portrayed it as a communal conflict between Buddhists and Muslims with guilt on both sides and suggested strongly that the Rohingya had brought it on themselves, especially with their higher birth-rate which made Buddhists feel threatened: the classic fear-mongering of ethnic cleansing used everywhere.”

“After becoming Myanmar head of state in March 2016, Suu Kyi dumped the equivocations entirely. It was more than evident the military was still running the country but with the human rights and democratic facade she cynically provided, especially through setting up phoney investigative commissions like the Kofi Annan whitewash commission.”

Since the military launched a crackdown back in October following the death of nine policemen in Rakhine state, it is believed that more than 1,000 Rohingya might have been killed in the crackdown. Military and police operations resulted in the displacement of at least 97,000 Rohingya, including approximately 73,000 who fled to neighbouring Bangladesh, the UN reported.

On 30 December 2016, 23 Nobel laureates and global leaders have urged the members of the UN Security Council (UNSC) to urgently put the persisting Rohingya crisis on the Security Council’s agenda. They observed, “Houses have been burned, women raped, many civilians arbitrarily arrested, and children killed. Crucially, access for humanitarian aid organisations has been almost completely denied, creating an appalling humanitarian crisis in an area already extremely poor.” They said, “It is time for the international community as a whole to speak out much more strongly. After Rwanda, world leaders said ‘never again’. If we fail to take action, people may starve to death if they are not killed with bullets, and we may end up being the passive observers of crimes against humanity which will lead us once again to wring our hands belatedly and say ‘never again’ all over again.”

The Office of the UN High Commissioner for Human Rights (OHCHR) documented many such serious human rights violations in a ‘flash report’ released on 3 February 2017. The report, which detailed “widespread and systematic” attacks against the Rohingya, concluded that the attacks against the Rohingya population in Rakhine State during the prolonged crackdown could “very likely” amount to crimes against humanity.

In June 2016, four months before the most recent attacks, the UN High Commissioner for Human Rights Zeid Ra’ad Al Hussein submitted a report to the UN Human Rights Council highlighting the “possible commission of crimes against humanity” against Rohingya in Myanmar.

Yet Myanmar’s Nobel laureate and de facto leader of the government Aung San Suu Kyi not only had refused to publically raise concerns over earlier allegations, but she allowed her own representatives to actively deny them and seek to discredit those, other media and rights campaigners, who reported on them. Those denials have been widely accepted by a Myanmar public long conditioned to despise the mainly stateless Muslim Rohingya minority.

State-sponsored sexual violence as a weapon of war with impunity has been an issue for decades in Burma. There are many activists and organisations that have done consistent and extensive work on the issue, mostly working from exile in other countries.

Documentation goes back as far as 1993 but just between 2005 and 2016, eleven women’s organisation from Myanmar published 33 separate reports on military sexual violence against women in ethnic groups or in groups the military is at war with. Although it is Rohingya who are sustaining what has been called the “final states of genocide,” many other ethnic groups are also targeted with systematic mass rape, conscription of child soldiers, forced labour, massacres, and deliberate destruction of villages and fields. Myanmar could be called a hellhole of ethnic persecution by the army of the Buddhist ethnic majority.

Fortify Rights reports that these random spot checks are used as pretext for security forces to commit sexual violence against Rohingya women and girls, including incidents of gang rapes and forced breastfeeding of babies in front of uniformed police and army soldiers. The UN Security Council documented 14 cases of such gang rapes and attempted sexual assaults between January and June 2014 alone, and noted that in early 2015, a member of the military raped a 10 year-old-girl. Forced marriages of women and girls as well as cross-border trafficking for sexual exploitation have also been reported.

According to Human Rights Wact, Burmese army and Border Guard Police personnel took part in rape, gang rape, invasive body searches, and sexual assaults in at least nine villages in Maungdaw district between October and mid-December. Survivors and witnesses, who identified army and border police units by their uniforms, kerchiefs, armbands, and patches, described security forces carrying out attacks in groups, some holding women down or threatening them at gunpoint while others raped them. Many survivors reported being insulted and threatened on an ethnic or religious basis during the assaults.

The United Nations Office of the High Commission for Human Rights (OHCHR) on February 3 reported that more than half of the 101 women UN investigators interviewed said they were raped or suffered other forms of sexual violence. The report, based on a total of 204 interviews, concluded that attacks including rape and other sexual violence “seem[ed] to have been widespread as well as systematic, indicating the very likely commission of crimes against humanity.”

Suu Kyi never had much to say on the issue—or on any issue other than electoral politics—until 2011 when she made a video statement to a Nobel Women’s Initiative ceremony saying: “Rape is used in my country as a weapon against those who only want to live in peace, who only want to assert their basic human rights, especially in the areas of the ethnic nationalities. Rape is rife. It is used as a weapon by the armed forces to intimidate the ethnic nationalities and to divide our country.”

However, after she was elected to parliament as a renowned human rights figure, she was asked about military impunity for sexual violence which had just been documented in a report titled “If they had hope, they would speak: the ongoing use of state-sponsored sexual violence in Burma’s ethnic communities” from the Women’s League of Burma, a coalition of women’s groups. Suu Kyi’s response was to defend the military by saying the ethnic armed groups also use sexual violence in conflict. Probably – but what does that have to do with impunity for the military committing human rights crimes? It is a non-sequitur meant to dodge the issue of impunity.

During the current offensive against the Rohingya, Suu Kyi has been running interference for the military out of two of her cabinet offices: the Ministry of Foreign Affairs and the State Counsellor’s Office. Staff members in those offices claim Rohingya are torching their own homes to get sympathy; they respond to every media report of rape or complaints by victims and witnesses of rape and torture that it’s all made-up and exaggerated to get international sympathy or “fabricated in collusion with terrorist groups.” Her representatives block every attempt to have formal or independent investigations of the allegations by blocking journalists and human rights monitors from entering the Arakan state. Most deplorably, in December, Suu Kyi’s State Counsellor’s staff posted a meme on their website with the words “Fake Rape,” and accused Rohingya women of making up rape allegations. There are also videos of Suu Kyi laughing and ridiculing the accusations during speeches in other countries.

While the whole world is raising question against her government and only thing that she doing is remaining in silence. But her governments not only discards, deny, and defy to all the allegations but also looks set to es¬cape an international investigation into alleged atrocities against its Rohingya minority.

Saying goes that ‘Silence is golden’. But in the case of Burma where genocide is going on; where houses have been burned, women raped, many civilians arbitrarily arrested, and children killed; where a genocide denounced by Pope Francis, seven Nobel Peace Laureates, the UN, EU, human rights organizations, the Dalai Lama, the political lowbrows of the US Congress and prestigious university researchers; how can remaining in silence by the most responsible person of the state can be golden. Hence, silence is always not golden.