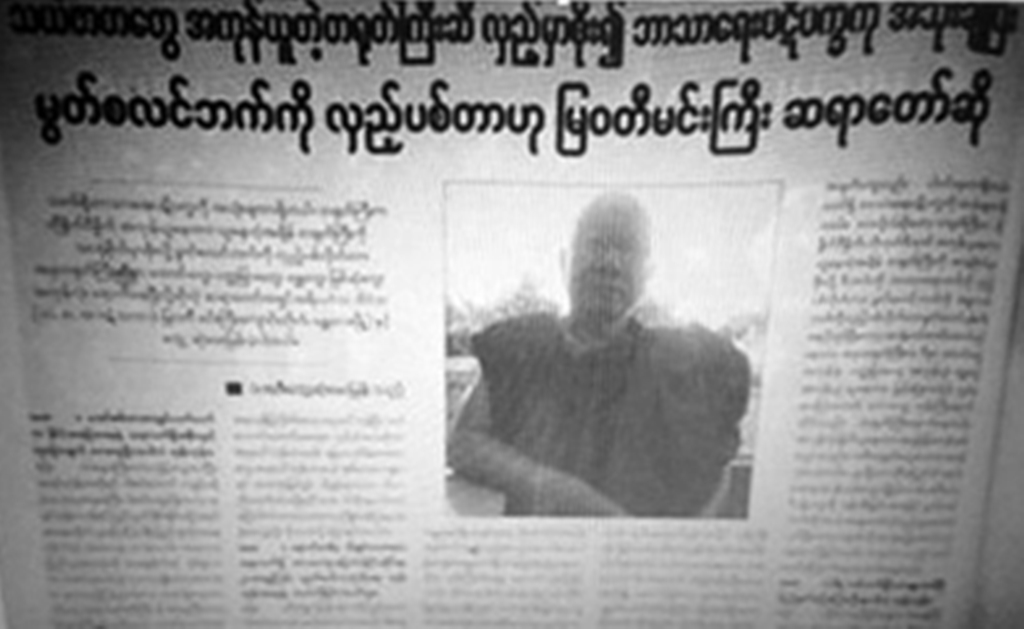 In June 2012, in the aftermath of the alleged rape and murder of a Rakhine woman by few members of the Rohingya community, all hell broke loose. By invoking medieval conception of justice of punishing everyone for the act of a few errant members, not only did the Buddhist Rakhines inflicted disproportionate harm on the Rohingyas, on occasions induced and led by the monks; the Burmese state too instead of providing protection to the victims became an active party in the carnage.

Anti-Muslim violence has spread to other areas of the country. March 2013 riots in Meikitla, in central Burma south of Mandalay, left forty-four people dead and thousands of homes consumed by flames. Later, two days of violence between Buddhists and Muslims in Lashio — the largest town in Burma’s Shan state, near the Chinese border — left a mosque, an orphanage, and many shops destroyed by Buddhist-identified mobs roaming the streets on motorcycles.

Since then, Muslim communities across Burma have suffered horrific violence, whipped up by hate speech preached by extremist Buddhist nationalists. Every aspect of their lives, including marriage, childbirth and ability to work, is severely restricted. Their right to identity and citizenship is officially denied. They have been systematically uprooted, with 200,000 held in internal displacement camps and unknown thousands have taken to sea as refugees. The UNHCR estimates that more than 86,000 people have left the area by boat from the Bay of Bengal since June 2012. The government even denies humanitarian agencies unfettered access in their internal displacement camps. Their homes, businesses, and mosques have been destroyed. Amid the destruction, many Rohingyas have been unfairly imprisoned, with some tortured to death while behind bars.

Since then, the Rohingya have been backed into a corner, their lives made so intolerable that tens of thousands have fled by sea, seeking safety and a sense of dignity elsewhere. Surviving the perilous journey to Bangladesh, Thailand or Malaysia is, too often, seen as the only way to finally be free from persecution.

The immediate cause of the violence can be traced to a series of violent incidents, beginning with rape and murder of an ethnic Arakan Buddhist woman, in Yanbye in southern Arakan State.

Ma Thi Da Htwe, a 26 year old Rakhine Buddhist woman, was the daughter of U Hla Tin and Daw Ma Mya of Tha Pri Chaung village of Kyauk Ni Maw Village Tract in Yanbe Township. She was disappeared on her way to her home from Kyauk Ni Maw at 5 pm on 28 June. She was found dead, with some marks of having met with a violent attack, at 9 am on 29 June on a bank of a dam between Kyauk Taran Village and Tha Pri Chaung village. Her body was brought to the hospital by the police on that day. After examining the body the doctor confirmed that she had been raped and killed by someone. An elderly man of the that village told that he had seen Htat Htat, Rafi and Lu Yu near the area of the occurrence in the evening of 28 June. All the three are hailed from Tha Pri Chaung village and are Muslims. They are Kaman Muslim not Rohingya. The police arrested them on 30 June and sent them to the Kyauk Pyu Jail. The Kyauk Pyu district court sentenced to Rafi(18) and Lu Yu (21) to death on 18 June. According to the government press, Htat Htat took his own life on 9 June.

If we go a bit deep into the matter, we can find that, Ma Thida Htwe was found dead near her village on the morning of 29 May 2012 and assumed that she had been raped and killed by someone. There was no eye witness or no creditable circumstances evident available at that moment. The nature and time of the occurrence were also not so clear. Only an elderly gentle man of that village suspected to the three persons because he had seen Htat Htat, Rafi and Lu Yu near the spot on the evening of 28, not at the spot. They may be or may not be, it was not only a suspect. It was a doubt. Everybody knows about who is the beneficiary of the doubt according to law. As far as the doctor’s report is concerned, how far confirmation of a doctor, from a village health clinic, has such qualification to prove beyond a reasonable doubt that the suspect kill or rape the victim! Did he have expertise or special knowledge of such serious crime? The doctor must be a person who is a specialist in a subject, often technical, who may present his/her expert opinion without having been a witness to any occurrence relating to the lawsuit or criminal case.

Thus, it was not a real case of rape by those Muslim boys rather it was false and created with the dead body of an innocent young Rakhine Buddhist girl. It was a politics of a dead body.

The real reason for the purge of the Rohingya by the Myanmar authorities is other. The oil economic interests of China and Myanmar also play a major role in the Arakan, which is rich in economic resources and which has one of the most important Chinese oil and gas pipelines. Myanmar has huge underground resources, especially gas, so some experts are not surprised that economic challenges have a role in the current crisis.

China, Myanmar’s top investor, has in recent years strengthened its position in the western part of the country where the Muslim Rohingya minority lives. Rakhine’s facilities are vital to China, which seeks to secure pipelines that carry oil and natural gas from the Middle East to Yunnan. (Southwest China), avoiding Malaga Strait between Malaysia and Indonesia.

Between 1988 and 2014, China’s investment reached more than $ 15 billion in the military-run country, most of which was in the mining and energy sectors. China also continues to supply the country’s military regime with weapons and equipment.

For Rakhine’s state, China has pumped billions of dollars for investment into ports, and natural gas and oil in the war-ravaged state. There is a giant business in Rakhine State, located on an area of 1700 hectares at a cost of $ 2.3 billion in cooperation with China. Once the project is completed – in 20 to 30 years – the commercial area will cover about 100 hectares. China also has a deep seaport and a large economic zone at a cost of $ 9 billion in Kyaukpyu, south of Rakhine, an area dedicated to China until 2038.

Although the original investments have been made at the level of governments, private companies have been involved in projects since then, as the Chinese investor won the largest share through a consortium of five parties led by CITIC Group.
The establishment of oil and gas pipelines is one of the first pillars of cooperation between Myanmar and China in the Arakan region, which has been hindered by periods of tension in the region against the background of violations against the Rohingya Muslims.

In 2004, a huge gas field was discovered in the Bay of Bengal near the Myanmar coast. In 2008, China National Petroleum Corporation (the third largest oil company in the world according to Fortin Global 2016) obtained the rights to use the gas field, in which the work has begun after a year to establish Oil and gas pipelines from Arakan, home of the Rohingya, to reach to the state of “Yunnan” in southwest of China. The gas pipeline was established on Sept. 30, 2013. It was a 30-year deal; Myanmar has to receive $ 13 million annually from China for rental revenue of land.

Each year, gas pipelines are expected to carry about 12 billion cubic meters of gas to China, while neighboring oil pipelines will carry 22 million tons (260,000 bpd), according to official data.
China has adopted a project to build oil and gas pipelines that reach Myanmar by sea from the Middle East and Africa, Reduces the time required to complete it about 30% of its original time (the transfer was moving south to Malacca Bay between Malaysia and Singapore). The first batch of crude oil arrived from Myanmar via the oil pipeline between the two countries on May 19, 2017.

Oil and gas pipelines run through 23 central cities, as well as 56 rivers and 76 mountains in Myanmar and China. The Chinese enterprise has not provided electricity to the region, nor has it created jobs for local workers.

Since the signing of establishing the oil and gas pipelines in 2009, demonstrations have broken out by citizens in Arakan against the plans of the Myanmar government and its partner, the China National Petroleum Corporation (CNPC), .The citizens of Arakan have submitted multiple complaints to the government authorities about the Chinese project causing pollution of river water and destruction of public property,” US media sources said.

In 2011, the Myanmar government succumbed to intense pressure from local opposition and was forced to suspend China’s Mytsone Reservoir in the state of Kachin (north) after it realized the role of its opponents in the loss of millions of dollars.
There are many Chinese companies tried to take advantage of rivers and mineral materials in Shan State resulting in conflicts between the Myanmar army and armed groups of the Kachin independence army and its ethnic allies north and east of the border state with China.

This makes clear why the Myanmar army has resorted to a number of violent campaigns against the Rohingya, under the pretext of avenging any domestic rebellion against the state’s investment plans, taking a dimension other than the sectarian dimension of the case.

It’s important to mention that the upping of China’s bilateral relations with Arakan National Party leader Aye Maung immediately before the election has ‘paid off’ in this scenario, since his hard-core anti-Muslim party cadres ‘keep the peace’ between the nationalist Buddhists and any potentially insurgent Rohingya’s, but they paradoxically increase the chances that a robust uprising will inevitably transpire the moment that the central government’s grip has loosened. The reason that China has taken the controversial path of supporting such a sub-state ethnic nationalist strongman such as Aye Maung could be because it wants to diversify the ‘security dependence’ of its pipeline terminals away from Suu Kyi and her proxies, while still being fearful enough of anything labeled “Muslim” so as ‘justify’ its reliance on a crackdown-prone stand-in and thus ignore the potential destabilization blowback that’s obviously brewing. The fact is that several ethnic armed forces in the North are under the influence of China and in restoring stability China will undoubtedly play a key role.

Whenever there are public demands to amend the 2008 constitution, whenever there are public protests against the Chinese projects in Burma, anti-Muslim violence was fomented and created by letting loose groups of well-trained mobs in order to divert the public’s attention. Unfortunately, the odious culture of using Muslims as political scapegoats is long anchored in Burmese politics; Muslims have been the victims of various power struggles in Burmese history.