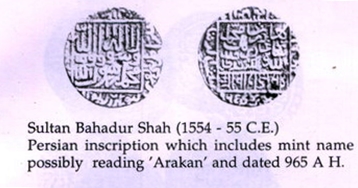 “The modern form of Arakan said to be derived from the Arabic ‘Al-Rakhang.’” – Professor Hodivala

Pamela Gutman was born in Adelaide, South Australia. Her tertiary education was at the University of Vienna, where she studied German, Philosophy, and Art History, and then at The Australian National University, where she studied Bahasa Indonesia, Old Javanese, and Sanskrit. She was first sent to Arakan in 1972 by G.H. Luce, the foremost historian of Burma. She wrote her doctoral thesis on Arakan and took her Ph.D from Australian National University on the cultural history before the 11th century. She is the author of many publications including a forthcoming book on Arakan.

Her thesis was ‘Ancient Arakan’ with special reference to its cultural history between the 5th – 11th centuries. In the second chapter of her thesis, she deals all the inscriptions of the period including Anandacandra stone inscription. According to her, the only prasasti of Anandacandra is eligible.

This inscription was first read by Dr. Johnston of Oxford University in 1935-1942. Later it was studied by Dr. D. C Sircir and Dr. Pamela Gutman.

According to Noel F. Singer, there was neither the name of the kingdom or the two premier city sites of Dhanyavati and Vaishali are mentioned; it simply states that a nagaram (royal city) had been established. (‘Vaisali and the Indianization’ pp.39-40) so mentioning the name country as arakedesa not arise.

There is a word ‘yaksapura raja’ in line 46, which according to Gutman, Yaksapura is the Mon capital of Thaton.

Moreover, According to Professor SH Hodivala, the prominent numismatic of India in early 19 century, the modern form of Arakan was derived from the Arabic ‘Al-Rakhang’, in his book ‘Studies on History of Indian Muslims’. This book was a critical commentary on ‘Elliot and Dowson’s History of India’ by as told its own Historians.

Studies in the History of Indian Muslims