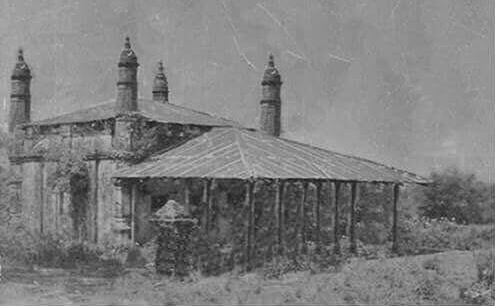 The earliest name of Arakan was ‘Kala Mukha’ (Land of the) Black Faces writes Noel Francis Singer in his book ‘Vaishali and the Indianization of Arakan’. It was inhabited by these dark brown-colored Indians who had much in common with the people (today’s Bangladeshis, or more particularly Chittagonians) living on the north-western side of the Naaf River, along the adjoining coastal areas of the Bay of Bengal. The resemblance was not limited to physical features like skin color, shape of head and nose alone, but also in shared culture and beliefs.

It had been a Hindu land since time immemorial. As evidenced by numerous archeological finds, it is obvious that the Hindu colonists, fuelled by their need for trade and commerce, gold and silver, first colonized the region in the early 1st century CE. By the 3rd century, the coastal regions of Kala Mukha had been settled, with the colonists dominating and coexisting warily with the aboriginal tribes. The Lords of the Solar and Lunar dynasties from far off Bharatavarsha had indeed arrived. In the major habitation sites, Sanskrit was the written language for the ruling classes, and religious beliefs were those current at the time on the subcontinent.

Dr. Emil Forchhammer, a Swiss Professor of Pali at Rangoon College, and Superintendent of the newly founded Archaeological Survey [1881] described this fertile region that, “The earliest dawn of the history of Arakan reveals the base of the hills, which divide the lower course of the Kaladan and Lemro rivers, inhabited by sojourners from India, governed by chiefs who claim relationship with the rulers of Kapilavastu. Their subjects are divided into the four castes of the older Hindu communities; the kings and priests study the three Vedas; the rivers, hills, and cities bear names of Aryan origin; and the titles assumed by the king and queen regent suggest connection with the Solar and Lunar dynasties of India.”

The second phase of Indianization of Arakan occurred between the 4th and the 6th century CE, by which time the colonists had established their kingdom, and named their capital Vaishali. As a port city, Vaishali was in contact with Samatat (the planes of lower Bangladesh) and other parts of India and Ceylon (Sri Lanka). Historically, these early rulers came to be known as the Chandras and controlled the territories as far north as Chittagong.

Dr Johnston, an epigraphist of Balliol College, Oxford, who translated the Sanskrit inscription (circa 729) of Ananda Chandra felt that the region had come under the control of the descendents of the [Licchavi] ruling family from Vaishali, Bihar, when they fled from the ascendancy of the Imperial Guptas (circa 300-467). According to him, as the time scale corresponds with the second surge of Hindu migration into Southeast Asia, and the creation of the new Vaishali, when the Licchavi, under Dven Chandra (circa 370-425) established a Chandra vamsa (Lunar dynasty); previously the Licchavi claimed to be of the Surya vamsa (Solar dynasty).

The Anand Chandra Inscription, which contains 65 verses (71 and a half lines) and now sited at the Shitthaung pagoda, provides some information about these early rulers. Interestingly, neither the name of the kingdom or the two premier cities – Dhanyavati and Vaishali – is mentioned. This 11-foot high monolith, unique in entire Burma, has three of its four faces inscribed in a Nagari script, which is closely allied to those of Bengali and north-eastern India.

The script on the panel on the east face is believed by Johnston to be the oldest. According to Pamela Gutman it was similar to the type of script used in Bengal (Bangladesh) during the early 6th century CE. As to the panel on the north face, Johnston mentioned that several smaller inscriptions in Bengali characters had been added in the 10th century. Gutman however felt that the principal text in this section is of the mid-11th century CE. The panel on the west face, which is reasonably preserved, is believed by Gutman to be of the earlier part of the 8th century. This priceless document not only lists the personalities of each monarch but also some of the major events of every reign.

So who is this Ananda Chandra? In verse 64, it clearly says that he was a descendant of the Saiva-Andhra monarch whose kingdom was located between the Godavari and Krishna Rivers of Bengal, and close to the Bay of Bengal. The founder of this new dynasty was Vajra Sakti who reigned circa 649-665 CE. His successor was Sri Dharma Vijaya, who reigned from circa 665-701. As noted by Singer, and much in contrast to Rakhine claims, Dharma Vijaya was not a Theravada Buddhist, but probably a Mahayanist. The next in line was Narendra Vijaya who reigned from circa 701 to 704 CE. The next to rule was Sri Dharma Chandra, who reigned from 704 to 720 CE. He was the father of Ananda Chandra who was a munificent patron of Mahayana Buddhism and Hindu institutions.

Archaeological remains, many historical and numismatics evidence confirms that it was a Hindu Indian state in the style of that period. According to MS Collis, “The area now known as north Arakan had been for many years before the 8th century the seat of Hindu dynasties; in 788 A.D. a new dynasty known as the Chandra, founded the city of Wesali; this city became a noted trade port to which as many as a thousand ships came annually; the Chandra kings were upholders of Buddhism, guarding and glorifying the Mahamunni shrine; their territory extended as far north as Chittagong; the dynasty came to an end in 957 A.D. being overwhelmed by a Mongolian invasion. The conclusion to be drawn from this MS. is that Wesali was an easterly Hindu kingdom of Bengal, following the Mahayanist form of Buddhism and that both government and people were Indian as the Mongolian influx had not yet occurred.”

History does not help us in forming an idea of Burmese infiltration into Arakan before 11th century. Hall and others described the Araknese (Rakhines) of today as “basically Burmese with an unmistakable Indian admixture …It is only about the 11th century that we can speak of a people of Indo-Mongoloid stock, from an ethnic group in the intermixture of tribes of various ethnic origins, such as, Australoid, Mongoloid and other elements now known as Arakanese Buddhist.

The Rakhines were the last significant group to come to Arakan. They appear to have been an advance guard of Burmans who began to cross the Arakan Yoma in ninth century. And they “could not be genealogically the same as to the people of Dannya Waddy and Wethali dynasties.” In old Burmese the name Rakhine first appeared in slave names in the inscriptions of 12th century. Dr. S.B. Kanango, said the name Rakhine was given by Burman and it was found in 12th to 15th century stone inscriptions of Tuparon, Sagaing. In early days not a single inscription was found in present day speaking Rakhine language. “The scripture of those early days found in Arakan indicate that they were in early Bengali script and thence the culture there also was Bengali.” Hence earlier dynasties are thought to have been Indians, ruling over a population similar to that of Bengal”

But in medieval times there was a reorientation eastward; the area fell under Pagan’s dominance, and Arakanese people began to speak a dialect of Burmese, something that continues to this day. With Burmese influence came ties to Ceylon and the gradual prominence of Theravada Buddhism.

Arabs were the earliest people to travel to the east by sea. They were in contact with Arakan even during the pre-Islamic days. The Arakanese first received the message of Islam from the ship wracked Arabs in 788 A.D. Such ship-wrecks were occurred over and over in the coasts of Arakan and Chittagong.

This Arab presence, with the message of Islam, made up the nucleus of Muslim society in Arakan. Thus in Wesali the Arakanese practiced Hinduism, Mahayanist form of Buddhism and Islam. The Burmese military regime affirmed in its official book Sasana Ronwas Htunzepho, published in 1997, “Islam spread and deeply rooted in Arakan since 8th century from where it further spread into interior Burma”.

MS Collis, in collaboration with San Shwe Bu, wrote in his article ‘Arakan place in the civilization of the Bay’ that, “Such was the kingdom of Wesali, an Indian state in the style of the period. But in 957 A.D. occurred an event which was to change it from an Indian into an Indo-Chinese realm and to endow the region of Arakan with its present characteristics. The “True Chronicle” records that in the year 957 A.D., a Mongolian invasion swept over Wesali, destroyed the Chandras and placed on their throne Mongolian kings. This important statement can fortunately be amply substantiated. Over the border in Bengal the same deluge carried away the Pala kings. The evidence for this latter irruption is fully cited in a paper by Mr. Banerji and there is no doubt that the Mongolian invasion, which terminated the ruler of the Palas, closed also the epoch of the Chandras. But while in Bengal the Hindus regained their supremacy in a few years, it would seem that in Arakan the entry of the Mongolians was decisive. They cut Arakan away from India and mixing in sufficient number with the inhabitants of the east side of the present Indo-Burma divide, created that Indo-Mongoloid stock now known as the Arakanese. This emergence of a new race was not the work of a single invasion. The MSS record subsequent Mongolian incursions. But the date 957 A.D. may be said to mark the appearance of the Arakanese, and the beginning of a fresh period.”

Wilhelm Klein, in his book ‘Burma the Golden’ wrote that, ‘all sudden, Arakan changed. The invading tribes made the country face east, away from India. As Burma began to flex its muscles, the profound changes born at Pagan started to transform Arakan… over the centuries the physiognomy of the Arakanese people changed. The racial admixture of Indo-European with only recently arrived Central Asians became predominantly Mongoloid, an ethnic mixture which still characterizes today’s Arakanese.’