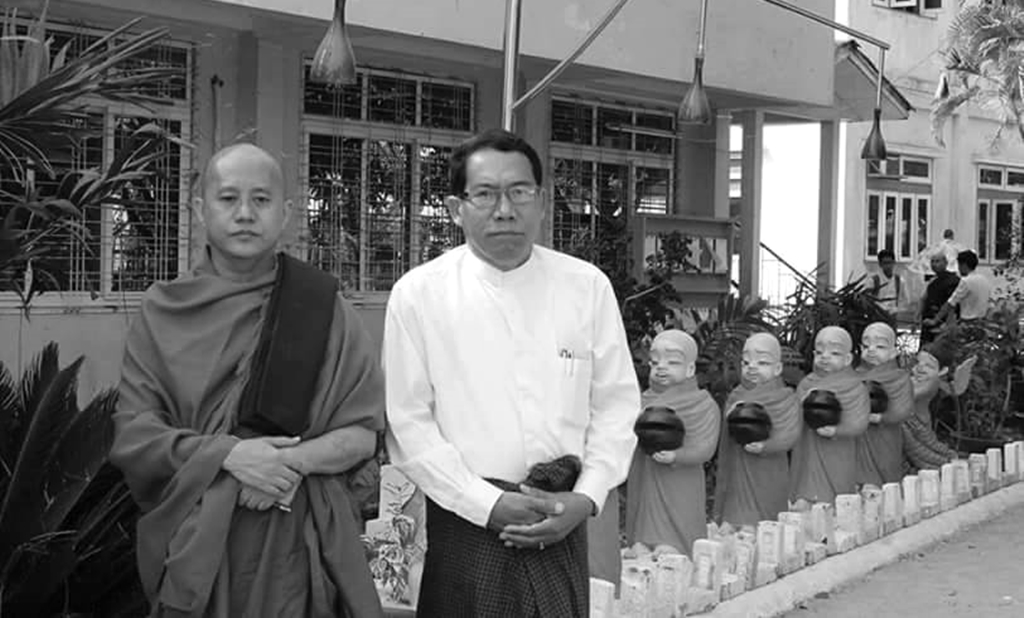 “The pain and loss of losing a loved one is the same for everyone; you don’t feel more or less if you’re a Buddhist or a Muslim or a Christian or a…” Rev. John Iwohara (Venice Buddhist Temple)

In 2012, the country was rocked by the worst sectarian violence in over 50 years, resulting in over 200 killed and 140,000 displaced, most of them being the Rohingya. A 2015 study by the United States Holocaust Museum counted 19 early warning signs of genocide in Myanmar since the start of sectarian violence. Another study by the International State Crime Initiative concluded that the Rohingyas had already passed the first four stages of genocide, including dehumanization and segregation and are now on the verge of mass annihilation. Anti-Muslim sentiment has grown so widespread that even Nobel Peace Prize laureate Aung San Suu Kyi’s National League for Democracy (NLD) party declined to field a single Muslim among their 1,100 candidates for the November 2015 elections. Initially, the violence was primarily targeted against the Rohingya Muslims, a minority population in Rakhine State whose origin and citizenship are bitterly denied by Buddhist hardliners.

At the same time, rising Buddhist nationalism has led to the emergence of the National and Religion Safeguarding Association popularly known as (Ma Ba Tha), an institutionalized nationwide movement headed by senior monks, including Wirathu. Ma-Ba-Tha’s extensive network includes chapters at state and township levels across the country.

Ma Ba Tha is known across the world as a racist Buddhist organization. Its work fans the flames of hatred and violence against Muslims in Myanmar, particularly the Rohingya in Rakhine State. Its most prominent leader is Ashin Wirathu, dubbed the “bin Laden of Buddhism” for his violent, religious extremism.

The Ma Ba Tha emerged as potent political force under the former military-backed government, successfully lobbying for a series of laws that rights groups say discriminate against women and religious minorities.

Scores of people have been killed in sectarian riots that have billowed out in step with their protests.

Ashin Wirathu denies any role in the riots. But his critics say that at the very least his anti-Muslim preaching is helping to inspire the violence. Wirathu claims the violence in Rakhine was the spark for the most recent violence in Burma’s central city of Meiktila, where a dispute in a gold shop quickly spiraled into a looting-and-arson spree.

Eighty percent of the population of the country consists of Buddhists, and Ashin Wirathu and his “969” movement, has attempted to justify killing of Muslims in the name of defending Buddhism against the encroaching influence of Islam.

Anti-Islamic violence has spread to other areas of the country. March 2013 riots in Meikitla, in central Burma south of Mandalay, left forty-four people dead and thousands of homes consumed by flames. Later, two days of violence between Buddhists and Muslims in Lashio — the largest town in Burma’s Shan state, near the Chinese border — left a mosque, an orphanage, and many shops destroyed by Buddhist-identified mobs roaming the streets on motorcycles.

When the violence in Rakhine became worsened in June and July 2012, President Thein Sein announced that the “only solution” was to send Rohingya to other countries that would accept the estimated 800,000-strong population, or to refugee camps overseen by UNHCR. UNHCR promptly rejected the proposed plan.

On 2nd September 2012, Wirathu led a march of thousands of monks in Mandalay, calling for citizens to support the President’s proposal and casting the Rohingya as a threat to the Burmese “Motherland”. He also traveled to Meikhtila in the days following the recent violent conflict between Buddhists and Muslims in central Burma.

In July 2013, the international edition of Time magazine added fuel to the fire with a cover photo of the Wirathu, calling him “The Face of Buddhist Terror.” President Thein Sein’s office released a statement about Wirathu and his fundamentalist 969 movement, saying 969 “is just a symbol of peace” and Wirathu is “a son of Lord Buddha.”

The unmatched social and moral authority enjoyed by Buddhist monks explains the powerful hold of the fiercely-agitating Ma-Ba-Tha and 969 movements.

The origins of the contemporary 969 movement are not entirely clear, but Wirathu has emerged as one of its strongest proponents. The movement imagines 969 as a symbolic counter to the number 786, numerological shorthand for Islam used among some Muslims in Asian countries. 786 has a practical purpose, as Muslim businesses (especially restaurants) display a 786 sticker to indicate to customers that they serve halal food, although it also functions as a more general notification that the business is Muslim-owned. The 969 movement has sought to institute a similar self-identification practice by Buddhist-owned businesses through the distribution of 969 stickers and encouragement of Buddhists to only patronize Buddhist-owned establishments.

Phra Paisal Visalo, a Buddhist scholar and prominent monk in neighboring Thailand, said, “Myanmar monks are quite isolated and have a thin relationship with Buddhists in other parts of the world”. “One exception is Sri Lanka, another country historically bedeviled by ethnic strife. Burmese monks have been inspired by the assertive political role played by monks from Sri Lanka’s Sinhalese majority”. Obviously it is just like that.

In Sri Lanka, a group of monks formed the Bodu Bala Sena (BBS or the Buddhist Power Force) in May 2012 to “protect” the country’s Sinhala-Buddhist culture. The BBS is believed to be behind the numerous attacks on Muslims and Christians in the country. A month later, tensions between Buddhists and Rohingya Muslims turned violent in Burma, and quickly spread.
The triggers for both groups’ sometimes violent attacks are usually rumors of a Buddhist being raped or murdered by Muslims. Or sometimes a new mosque or church is under construction in a Buddhist majority area with a growing minority presence. From there, fighting often escalates into hours of vandalism and intimidation; in worst cases, the initial spark results in days of arson and mass killing.

A BBS delegation visited Thailand and Burma early March 2012, to discuss issues related to Muslims as well as to plan a global Buddhist convention where Wirathu was also invited
The BBS general secretary Golagoda Gnanasara Thera and 969 leader Ashin Wirathu both consistently harp on about high Muslim birth rates, regardless of how the children may grow up to behave in their respective communities, leading to what both radical leaders have claimed is causing the slow eradication of Buddhist culture.

Beginning in April 2012, boycotts of Muslim owned businesses have spread across the nation, and sympathetic lawmakers started introducing legislation sponsored by the movement. More recently, Buddhist shop owners have begun displaying 969 logos in their windows, and some also use their businesses as a place to publically air the speeches of Wirathu and others in the movement. And along the way, Buddhists have committed numerous acts of violence and murder against Muslims, actions that Wirathu and other movement leaders deny supporting, but clearly are an outgrowth of the anti-Muslim atmosphere they have inspired.

In this way, 969 has functioned as a sort of “Buy Buddhist” campaign and its supporters claim that they are merely responding to similarly insular buying practices in Islamic communities. However, some 969 group’s literature and monastic sermons have also directly criticized Islam and spread unsubstantiated rumors about Islamic practices in Burma.
Burma’s the then minister of religious affairs; Hsan Hsint justified a boycott of Muslim businesses led by monks: “We are now practicing market economics,” he said. “Nobody can stop that. It is up to the consumers.”

Mabatha and the 969 Movement have run a broad anti-Muslim campaign, from organizing economic boycotts against Muslim businesses to, some charge, inciting pogroms. During a visit by a delegation from the Organization of Islamic Cooperation last year, monks marched through Yangon with banners calling Islam “a faith of animals with uncontrollable birthrates.” Other monks have even been accused of instigating killings early 2013 in the town of Meiktila, in central Myanmar, where Buddhist mobs destroyed Muslim neighborhoods, killing at least 44 people, including 20 students and several teachers at an Islamic school.

These extremist monks are proving to be valuable political allies for the ex-military leaders of the pseudo-civilian government. Ashin Wirathu’s camp criticizes the opposition leader Daw Aung San Suu Kyi for being too weak in her defense of nationalism and Buddhism. The radical monks oppose amending the current military-drafted Constitution to let Burma nationals with a foreign spouse or children run for the presidency, which would open the way for Ms. Aung San Suu Kyi in the 2015 election. Meanwhile, some monks are pushing to obtain the right to vote, which the Constitution also bans.

According to the article 34 of existing 2008 Constitution of Burma “freely profess and practice religion subject to public order, morality or health,” and as to article 348 “shall not discriminate against any citizen … based on race, birth, religion, official position, status, culture, sex and wealth.”

As threats continue, the so-called reformist government remains silent. Rather than taking steps to ensure our safety, the minister of religious affairs has proposed to legally recognize the Association to Protect Race and Religion—known locally as Ma Ba Tha—as an official organization. While one of the main responsibilities of the ministry of religious affairs is “To ensure that all people living in the Union of Myanmar can freely believe in any religion and freely practice that religion”.

Wirathu, who was sentenced to 25 years in jail in 2003 for inciting anti‐Muslim hatred, now free to move, speak, and even deliberately launched for so-called racial purification of “Burmese blood”, nationalist movement. He is orchestrating brutal campaigns of hate speech, expulsion, persecution and atrocity. But in the eyes of President Thein Sein his movement 969 is ‘just a symbol of peace” and Wirathu is “a son of Lord Buddha.”