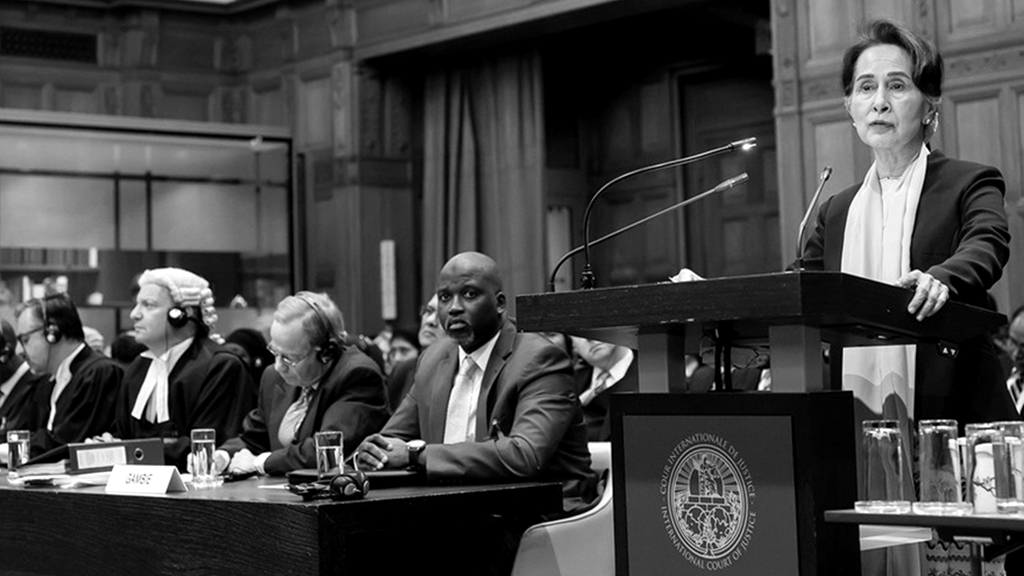 On 11 December 2019, at the Peace Palace in the Dutch city The Hague, while defending the indefensible at the world court, the International Court of Justice (ICJ), Aung San Suu Kyi was remarkably unashamed. She and her legal team did not deny all those facts of wrongdoing mentioned in the petition filed by the Gambia including of atrocities, brutalities, forced mass-deportation, use of sexual violence, spreading hate and discrimination against an ethnic minority group, the Rohingyas. She and her team only tried to deny, to distract and to deflect at the court as a defence strategy for the denial of the intent to commit genocide. Moreover, according to them the numbers of Rohingyas killed were not sufficient to call it genocide.

In November 2017, both the UN officials and the Human Rights Watch reported that the Armed Forces of Myanmar were committing widespread gang rapes and other forms of sexual violence against the Rohingya Muslim women and girls for the last three months. Alongside the Armed Forces, the Myanmar Border Guard Police and Buddhist militias of Rakhine were also involved in these atrocities. HRW stated that these gang rapes and sexual violence were committed as part of the military’s ethnic cleansing campaign while the United Nations Special Representative of the Secretary-General on Sexual Violence in Conflict Pramila Patten stated that the Rohingya women and girls were made the “systematic target of rapes and sexual violence because of their ethnic identity and religion. Other forms of sexual violence included sexual slavery in military captivity, forced public nudity, and humiliation. Some women and girls were raped to death while others were found carrying raw wounds and being traumatized after they had arrived in refugee camps in Bangladesh.

Suu Kyi stated at the court that, “Mr President and members of the court, these reflections are relevant to the present hearing because the Applicant has brought a case based on the Genocide Convention. We are, however, dealing with an internal armed conflict, started by coordinated and comprehensive attacks by the Arakan Rohingya Salvation Army, to which Myanmar’s Defence Services responded. Tragically, this armed conflict led to the exodus of several hundred thousand Muslims from the three northernmost townships of Rakhine into Bangladesh – just as the armed conflict in Croatia with which the Court had to deal led to the massive exodus of, first, ethnic Croats and later, ethnic Serbs.

However, according to the Mission report of UN High Commissioner for Human Rights, which released on October 11, 2017, noted that “prior to the incidents and crackdown of 25 August, a strategy was pursued to:

• Arrest and arbitrarily detain male Rohingyas between the ages of 15–40 years;

• Initiate acts to deprive Rohingya villagers of access to food, livelihoods and other means of conducting daily activities and life;

• Commit repeated acts of humiliation and violence prior to, during and after 25 August, to drive out Rohingya villagers en masse through incitement to hatred, violence and killings, including by declaring the Rohingyas as Bengalis and illegal settlers in Myanmar;

• Instil deep and widespread fear and trauma – physical, emotional and psychological, in the Rohingya victims via acts of brutality, namely killings, disappearances, torture, and rape and other forms of sexual violence.

Hence, it is cleared that it was not because of the ARSA attacked rather it was due to strategic persuasion of the Myanmar army prior to the incidents and crackdown of 25 August.

Moreover, admitting brutalities Suu Kyi said, ‘it cannot be ruled out that disproportionate force was used by members of the Defence Services in some cases in disregard of international humanitarian law.’ But her defence was “Please bear in mind this complex situation and the challenge to sovereignty and security in our country when you are assessing the intent of those who attempted to deal with the rebellion. Surely, under the circumstances, genocidal intent cannot be the only hypothesis.”

The United Nations Genocide Convention, which was established in 1948, defines genocide as “acts committed with intent to destroy, in whole or in part, a national, ethnic, racial or religious group, as such” including the killing of its members, causing serious bodily or mental harm to members of the group, deliberately imposing living conditions that seek to “bring about its physical destruction in whole or in part”, preventing births, or forcibly transferring children out of the group to another group.

According to the UN Resolution 96(1), 11 December 1946, “Genocide is a denial of the right of existence of entire human groups, as homicide is the denial of the right to live of individual human beings; such denial of the right of existence shocks the conscience of mankind, results in great losses to humanity in the form of cultural and other contributions represented by these human groups, and is contrary to moral law and the spirit and aims of the United Nations. Many instances of such crimes of genocide have occurred when racial, religious, political and other groups have been destroyed, entirely or in part.”

Under international law, the genocide offence has two separate mental elements, namely a general one that could be called ‘general intent’ and an additional ‘intent to destroy’. A general intent normally relates to all objective elements of the offence definition and has now been defined in international criminal law by Article 30 of the Statute of the International Criminal Court (ICC) as basically encompassing a volitional (intent) and/or a cognitive or intellectual (knowledge) element. The specific intent element defines the purpose of committing the acts: “to destroy in whole or in part, a national, ethnical, racial or religious group, as such.” The specific intent is a core factor distinguishing genocide from other international crimes, such as war crimes or crimes against humanity.

The ‘intent to destroy’ requirement turns genocide into ‘an extreme and the most inhumane form of persecution.’ On the other hand, the ulterior intent distinguishes genocide from persecution and all other crimes against humanity and contributes to its particular wrongfulness and seriousness. Yet while genocide may then be qualified as a special intent crime, this does not answer the question as to the concrete meaning and degree of this intent.

The current bloodbath is not an isolated occurrence rather it follows decades of systematic discrimination, persecution, and dehumanization, which has served to legitimize multiple waves of violence and now, leaves the increasingly-helpless Rohingya on the edge of genocide.

The country’s military, the backbone of all governments since 1962, has pursued varied and evolving strategies to reduce, remove, replace, relocate and otherwise destroy the Rohingya. The state’s strategies range from framing the Rohingya as ‘British colonial-era farm coolies’ from the present-day Bangladesh who came to British Burma only after the 1820s to painting the impoverished and oppressed Rohingya as potential Islamists intent on importing terrorism from the Middle East. From formulating and spreading the view of the Rohingya as aliens to enacting a national citizenship law to strip the Rohingya of their right of belonging – citizenship – to Burma.”

Burmese regime always try to deny and to reject the Rohingya as one of the country’s indigenous peoples although pioneering historical studies by G.H. Luce and Than Tun as well as ethnolinguistic studies carried out by some British East India Company staff dating back to the 1780’s firmly establish the integral presence of the Rohingya as a distinctly Muslim population of the then Arakan kingdom.

In June 2012, in the aftermath of the alleged rape and murder of a Rakhine woman by few members of the Rohingya community, all hell broke loose. By invoking medieval conception of justice of punishing everyone for the act of a few errant members, not only did the Buddhist Rakhines inflicted disproportionate harm on the Rohingyas, on occasions induced and led by the monks; the Burmese state too instead of providing protection to the victims became an active part in the carnage.

Since then, Muslim communities across Burma have suffered horrific violence, whipped up by hate speech preached by extremist Buddhist nationalists. Every aspect of their lives, including marriage, childbirth and ability to work, is severely restricted. Their right to identity and citizenship is officially denied. They have been systematically uprooted.

Anti-Muslim violence is a constructed consequence of the government’s “institutionalized discrimination and deliberate failure to intervene and enact legal accountability”. It is in fact widely believed internationally and in many parts of Burma that anti-Muslim violence is a state-driven movement “to generate chaos in an attempt to derail reforms, to maintain . . . political/economic power, and/or to provide an opportunity for the army to maintain its position in society.”

The ongoing genocide against the Rohingya people garnered strong criticism from all across the world and created grave concern about human rights issues. Amnesty International and the United Nations have labelled it as a crime against humanity and termed as a target of “a systematic campaign of violence”. The government of Malaysia has described as “genocide”.

The report of the United Nations Independent International Fact-finding Mission on Myanmar characterizes the recent events in Rakhine State as a human rights catastrophe that was foreseeable and planned; it described in detail the “clearance operations” of the national armed forces, in six villages, marked by large-scale massacres and other killings, including of women, children and the elderly, mass gang rape, burning and looting. The attacks were systematic and conducted in total disregard for human life and dignity, in violation of human rights and international humanitarian law, noting that the attacks were preceded by long persecution of the Rohingya. Sufficient information to warrant the investigation and prosecution of senior officials of the Tatmadaw on charges of genocide had been found. The seven indicators in the conclusion of UN Fact-Finding has clearly reflected the genocidal intent of the Myanmar army.