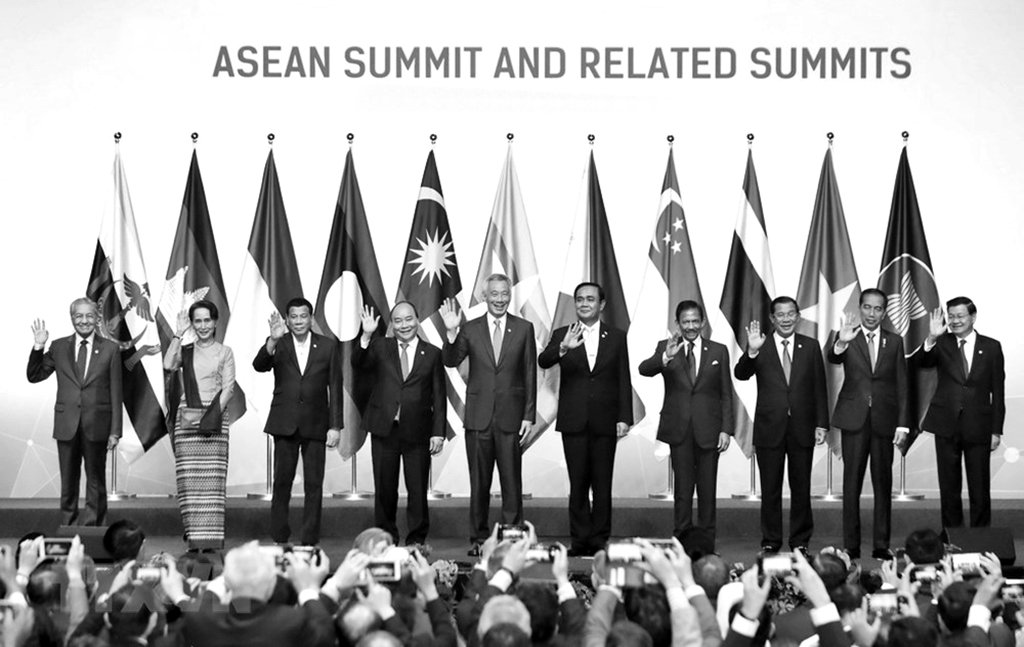 The 34th ASEAN Summit was held in Bangkok, Thailand on June 20 to 23, 2019. In the statement of the Chairman of this summit it is said that, ASEAN supported the repatriation process of Myanmar’s fleeing Rohingyas, but stopped short of condemning Myanmar.

“(We) expressed our continued support for Myanmar’s commitment to … facilitate the voluntary return of displaced persons in a safe, secure and dignified manner,” the statement said, not calling the Rohingya by name.

They also expected a commission created by Myanmar’s government to seek accountability through “an independent and impartial investigation into alleged human rights violations and related issues”.

Formed more than 50 years ago, ASEAN has historically struggled with challenges facing the region because it works only by consensus and is reluctant to become involved in any matter regarded as internal to a member state.

The statement, however, proved rather weak in the face of a call on opening day of 22nd June by Malaysia’s foreign minister Saifuddin Abdullah to bring the perpetrators of massacres and atrocities against the Rohingya to justice and to “include the citizenship of the Rohingyas” in the repatriation process.

“Developments in Myanmar … (are) providing a litmus test for ASEAN’s capacity to manage developments in one of its member states that have wider ramifications for the region and, indeed, beyond,” Marty Natalegawa, a former Indonesian foreign minister, told Reuters.

In the mean time, Asean foreign ministers met on the sidelines of the Asean Summit and discussed repatriation of the refugees following the long stalemate since November last year when the refugee group resisted the plan due to fears about their safety.
“We discussed safe repatriation and recognition of their status in Myanmar society upon their return,” Thai Foreign Minister Don Pramudwinai, told reporters after the meeting.

Myanmar authorities would issue them an NVC, a step towards recognition of their identity, he said.

More than 740,000 Rohingya refugees fled from violence in Rakhine state since August 2017 after a heavy-handed “clearance operation” by the Myanmar military in responding to attacks on security outposts.

Myanmar and Bangladesh agreed on a repatriation deal in late 2017 but it is yet to be implemented. Don said both countries needed to set the terms, conditions and timeline and the screening procedure.

Asean has agreed to enhance its role and visibility in humanitarian assistance, repatriation and sustainable development in Rakhine state.

ASEAN Secretary-General Lim Jock Hoi and an assessment team from the ASEAN Coordinating Centre for Humanitarian Assistance on Disaster Management visited Rakhine several times between December and May. Their report on the matter was circulated among ministers for further discussion and instruction.

During its 2018 summit, ASEAN addressed the Rohingya crisis but focused largely on repatriation issues, treating the “humanitarian situation” in Myanmar’s Rakhine State merely as “a matter of concern” and disregarding the government’s crimes against humanity. For 2019 summit, ASEAN’s Emergency Response and Action Team (ERAT) produced a “preliminary needs assessment” on repatriation for the approximately one million Rohingya refugees now in Bangladesh. It does not even use the term “Rohingya,” denying the group’s self-identity.

According to Brad Adams, Asia Director of Human Right Watch, “ASEAN seems intent on discussing the future of the Rohingya without condemning – or even acknowledging – the Myanmar military’s ethnic cleansing campaign against them, …It’s preposterous for ASEAN leaders to be discussing the repatriation of a traumatized population into the hands of the security forces who killed, raped, and robbed them.”

In the closing statement of the 2018 summit, ASEAN expressed to find out a comprehensive and durable solution to address the root causes of the conflict and to create conducive environment so that the affected communities can rebuild their lives. While, Myanmar’s government has repeatedly denied that it’s military was primarily responsible for the current refugee situation, ludicrously blaming Rohingya for the widespread destruction and displacement.

However, ASEAN’s ensuing focus on a repatriation process not only ignores the ground reality but also fails to identify the root causes of the crisis that need to be resolved before refugees can return in safety and dignity. They have also ignored efforts to investigate abuses and obtain justice for victims of atrocities.

The United Nations, Human Rights Watch, and numerous other humanitarian and human rights groups have concluded that current conditions in Rakhine State are not conducive for voluntary, safe, or dignified repatriation of Rohingya. The estimated 500,000 Rohingya remaining in Myanmar are trapped in appalling conditions, confined to camps and villages without freedom of movement, subject to ongoing state persecution and violence, and cut off from many basic humanitarian services including adequate food, medical care, and education. Neither the national nor the Rakhine State government has moved to improve conditions or address the causes underlying the crisis. Returning Rohingya to Myanmar would condemn them to lives of deprivation, oppression, and possibly death.

ASEAN could play an important facilitating role for genuine reforms and communicating to Myanmar that if it ignores concerns it may face intensifying economic sanctions and travel bans on senior military commanders, as well as removal of Myanmar from important regional and international military and economic initiatives.

Members of the Association of Southeast Asian Nations (ASEAN) have a serious problem in their backyard. Every day in Myanmar approximately 1 million Rohingya Muslims are denied their most basic human rights and face a risk of crimes against humanity and ethnic cleansing. The treatment of the Rohingya is a test of the degree to which ASEAN member states take seriously their commitment to regional cooperation on protecting human rights and their global pledge to the Responsibility to Protect (R2P), a pact to protect populations from mass atrocity crimes.

So far, ASEAN states and the broader international community are failing in this commitment. For decades they have turned a blind eye to the persecution of the Rohingya, one of the world’s most vulnerable minorities. Rohingyas have repeatedly been attacked and killed on the basis of their identity, receiving little to no physical protection from security forces.

ASEAN introduced the issue of the Rohingya in 2009 at the 14th ASEAN Summit when member states discussed the need to cooperate to find a regional solution to the Rohingya refugee problem. As a result of the summit, ASEAN established the Bali process to primarily decrease transnational crimes such as smuggling and illegal migration. However, this process was not very successful in resolving the Rohingya conflict as it downgraded the importance of Rohingya asylum seekers fleeing widespread prosecution in Myanmar to a question of human trafficking.

Later, following the 2012 riots, ASEAN failed to propose an effective solution to address the Rohingya issue. In response to the first outbreak of violence in Rakhine state, in August 2012, ASEAN foreign ministers merely issued a statement that encouraged the Myanmar government to continue cooperation with the UN to address the humanitarian crisis in Rakhine. The foreign ministers expressed willingness to provide humanitarian assistance to Rakhine state and stressed “the promotion of national harmony” as an essential part of the country’s democratization. This ASEAN response was too weak to bring about change in Myanmar.

Options for regional cooperation for refugees and asylum seekers are limited, given that only two of the 10 ASEAN countries (Philippines and Cambodia) have signed the 1951 Refugee convention.

There are a number of reasons why the region’s leaders have found it so difficult to resolve this problem. ASEAN itself remains wedded to the principle of non-interference in its member states’s domestic activities, which limits the amount of pressure that can be brought to bear on Naypyidaw; outsiders have to strike a careful balance between encouraging the regime to reform and actions that could increase the country’s social and political fragmentation during its fragile transformation; and the region’s governments are only too aware that an influx of migrants could add to the demands for social services and pressures on their own vulnerable communities, heightening the risk of inter-communal violence.

With Rohingyas facing the risk of crimes against humanity and ethnic cleansing, it is simply unacceptable for ASEAN states to appeal to regional preferences for “non-interference” as a justification for silence and indifference.

Yet, the ASEAN do not absolve the region of its protection responsibilities. Not only have all the relevant states committed themselves to the Responsibility to Protect (R2P) as well as a range of international legal instruments that grant intrinsic rights to the Rohingya, but ASEAN’s own Declaration of Human Rights applies to all people in Southeast Asia regardless of “race, gender, age, language, religion, political or other opinion, national or social origin, economic status, birth, disability or other status” (Article 2). It affords rights to life (Article 11), personal liberty and security (Article 12), asylum (Article 16), and nationality (Article 17). It provides freedoms from servitude, slavery and people smuggling (Article 13), torture and cruel and degrading behaviour (Article 14). It also affords freedom of movement (Article 15). These are the rights that the region’s leaders themselves say underpin the emerging ASEAN community.

However, ASEAN, as the regional organization, must need to play an important role in the international community’s action because the spill-over of Myanmar’s ethnic conflict into neighboring ASEAN member nations and Bangladesh. Moreover, according to the ASEAN Charter, “promoting and protecting human rights” is one of the primary purposes of the Association. ASEAN also has a positive history of facilitating international assistance for humanitarian concerns in Myanmar. For example, in 2008 following Cyclone Nargis, which devastated Myanmar’s Irrawaddy Delta region, when the military junta refused to allow the West to provide humanitarian assistance, ASEAN facilitated backdoor diplomacy to convince the Myanmar government to allow international humanitarian aid under the aegis of ASEAN. Thus, former Secretary-General Surin Pitsuwan’s comments in 2012 demonstrate that the Association recognizes that the plight of the Rohingya must be addressed regionally.

ASEAN could also use its established mechanisms to provide peacemaking, mediation, and conflict prevention in Rakhine state. The lessons learned by other N member states, such as Indonesia, Malaysia, Thailand, and the Philippines, in managing communal or religious conflict could be aptly applied to mitigate Myanmar’s Rohingya conflict. Member states should assist Myanmar with border security and migration issues as well as with strengthening local government capabilities for peace management. ASEAN should leverage the resources and expertise of dialogue partners, such as the US, Australia, and the EU, to “assist in Myanmar’s capacity building in law enforcement, rule of law, human rights protection, and good governance.”