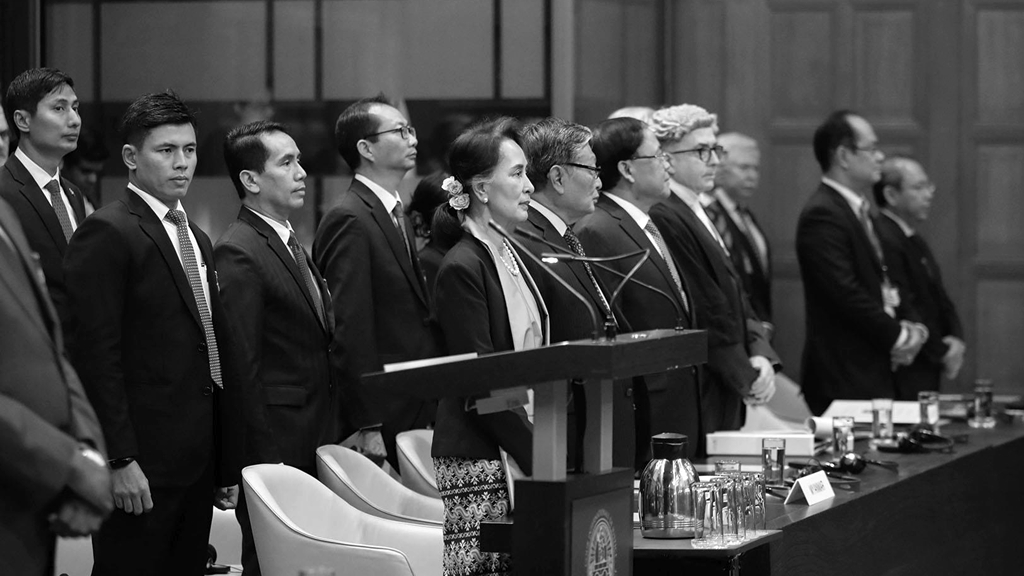 On 10 December 2019, in her submission to the International Court of Justice at The Hague – where she led the government’s defense against accusations of genocide – Suu Kyi stated that, “Under its 2008 Constitution, Myanmar has a military justice system,” she told the court. “Criminal cases against soldiers or officers for possible war crimes committed in Rakhine must be investigated and prosecuted by that system”. The Gambia have even suggested that there cannot be accountability through Myanmar’s military justice system. This not only contradicts Article 20(b) of the Constitution of Myanmar, it undercuts painstaking domestic efforts relevant to the establishing of cooperation between the military and the civilian government in Myanmar.

The 2008 constitution that drafted by the State Peace and Development Council (SPDC) is a constitution which: –

• Proposed to continue military dominance of Burma with a civilian face, and to deny political parties the right to participate freely in the future governing of the country.
• Reserved one-quarter of the seats in both houses of parliament for military officers appointed directly by the commander-in-chief, and standing military officers can also run for the “open” seats of parliament.
• Reserved certain cabinet positions, including those with a security or military component. for the military.
• Required 75% of the votes in both house parliament to amend.
• Empowered the military-dominated National Defense and Security Council to seize power if it unilaterally declares a “state of emergency.
• Required that only serving military officers can lead the three most powerful ministries — Defense, Home Affairs, and Border Affairs — and prevents legislative scrutiny of the military’s budget.
• Added constitutional article 59(f), a special provision obviously crafted with Suu Kyi in mind. That article prohibits from the presidency any person whose children are citizens of another country — both of Suu Kyi’s adult sons have British citizenship.

The referendum for this constitution was held on 10 May 2008. Cyclone Nargis hit Myanmar a few days before the referendum, and the vote was postponed to 24 May in the most severely affected areas — 7 out of 26 townships in Irrawaddy Division and 40 out of 45 townships in Yangon Division. United Nations Secretary General Ban Ki-moon called for the referendum to be postponed in full to concentrate on the “national tragedy,” but the government rejected this. The Junta came under heavy criticism for diverting critical resources from survivors toward the referendum, including evicting refugees from shelters such as schools so that these can be used as polling stations.

The environment in Burma prior to the referendum has been one of continuing intimidation of the political opposition and general populace, denial of basic freedoms of expression, association, and assembly, and arbitrary arrests and detention. Under such widespread repression and a pervasive climate of fear, no free and fair referendum can take place in Burma.

The Burmese people have the right to make up their own minds about the draft constitution, but the conditions for the May referendum do not allow them an informed and free choice. Most Burmese have not even seen the draft constitution, a 194-page document (in Burmese and English, and in none of the minority languages) that was released only a month before the referendum and is only available for purchase in some bookshops.

The ruling State Peace and Development Council (SPDC) has refused to allow any meaningful public discussion and debate of the draft constitution, and has arrested and jailed those who have expressed opposition to its contents.

The SPDC also denies the Burmese people the right to freely discuss the draft constitution, or to engage in any form of assembly or association to protest the upcoming referendum.

In November 2011, following a meeting of its leaders, the NLD announced its intention to re-register as a political party in order to contend 48 by-elections necessitated by the promotion of parliamentarians to ministerial rank. On 18 January 2012, Aung San Suu Kyi formally registered to contest a Pyithu Hluttaw (lower house) seat in the Kawhmu Township constituency in special parliamentary elections to be held on 1 April 2012.

In an official campaign speech broadcast on Burmese state television’s MRTV on 14 March 2012, Aung San Suu Kyi publicly campaigned for reform of the 2008 Constitution, removal of restrictive laws, more adequate protections for people’s democratic rights, and establishment of an independent judiciary. The speech was leaked online a day before it was broadcast. A paragraph in the speech, focusing on the Tatmadaw’s repression by means of law, was censored by authorities.

Her landmark 14 minutes message was the first time she was allowed to use state media to promote her political message. That was new territory for everyone in Burma. A woman whose face was kept from public view by the old military regime now finds herself addressing the nation on state-controlled TV and radio.

Although a section of her original script referring to the old military government was censored, Suu Kyi delivered tough criticism of the new political system in Burma. In her short message, she told the armed forces should be responsible for the defense of the country and ready to work for the good of the country and should stay out of politics. All repressive laws must be revoked and laws introduced to protect the rights of the people. The judiciary must be strengthened and released from political interference.

In her election campaigns she clearly said that the current parliament is composed of unelected people – and that was not democracy.

After winning in bye-election, Suu Kyi and her colleagues had initially refused to join parliament when the latest session began on 23 April because they object to the oath obliging them to “safeguard the constitution”. They want the word “safeguard” changed to “respect”, but later they put the issue aside by saying that, “Politics is an issue of give and take. We are not giving up, we are just yielding to the aspirations of the people”.

Since winning in the parliament, Suu Kyi’s allies started for constitutional reform. The ’88 generation, made up of veterans of the 1988 students, also participation in constitution reform movement. The 88 generation were working alongside her National League for Democracy (NLD) party on a petition to change the constitution, which the NLD says has already garnered 2.5 million signatures.

However, since 2013, under the guidance of former Senior General Than Shwe, the Thein Sein government extra measures to counter to the political activities of the opposition parties and to stop their constitutional reform. To arrange public movement in protest of constitutional reform the government and the army top brass created the National and Religion Safe-guarding Association/Ma-Ba-Tha, also known as 969 groups. The main task of this group were: –

• To arrange counter public meetings on the way of opposition leader’s tour for constitutional reform and to convince the people not to participate in these activities by hook or by crook.
• To make disturbance and public uproar Suu Kyi’s constitutional reform tour.
• To frame with false allegations of serious crime to the members of her party and try to decline public support to her.

However, why did Suu Kyi at The Hague state that, under its 2008 Constitution, Myanmar has a military justice system criminal cases against soldiers or officers; for possible war crimes committed in Rakhine must be investigated and prosecuted by that system; if war crimes have been committed by members of Myanmar’s Defence Services, they will be prosecuted through our military justice system, in accordance with Myanmar’s Constitution?

Is it a respect to the constriction or for the safeguard of the constitution or just her a misstep?