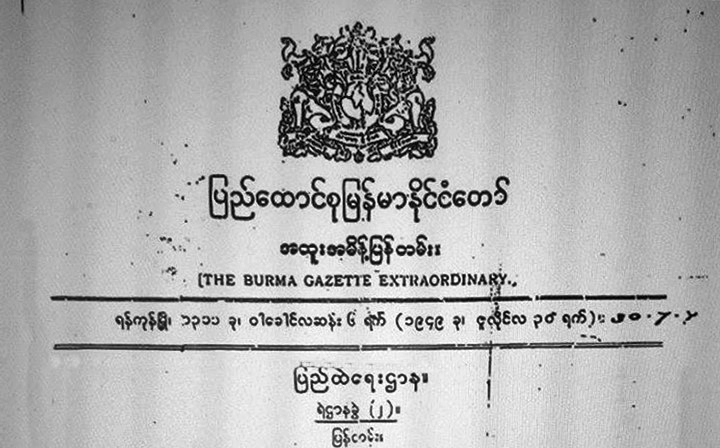 Indigenous peoples were the descendants of those peoples that inhabited a territory prior to colonization or formation of the present state.

The Muslims of Arakan have a more than 1300 years old tradition, culture, history and civilization of their own expressed in their shrines, cemeteries, sanctuaries, social and cultural institutions found scattered even today in every nock and corner of the land. By preserving their own heritages from the impact of Buddhist environments, they formed their own society with a consolidated population in Arakan well before the Burmese invasions of Arakan in 1784.

Jacques Leider, in his article, ‘Between Revolt and Normality: Arakan after Burmese Conquest’ mentioned that, “we admit of a total population of Arakan of circa 250,000 in the time of (the Burmese) conquest, the country steadily lost up to 50% of its population. English observers estimated the Arakanese population at about 100,000 at the time of the British conquest.”

According to the British government document on the cultures and inhabitants of Arakan by the Secret and Political Department, Fort William dated 26th April 1826, “The population of Arracan and its dependencies Ramree, Cheduba & Sandaway does not at present exceed 100,00 souls, may be classed as — Mughs six tenths, – Mussalman three tenths, – Burmese one tenth, Total 100,000 Souls–.” As to Mr. Paton, Sub Commissioner of Arakan, who submitted this report from Akyab, “The extent of the Population has been tolerably well ascertained, proved a census taken by Mr. Robertson, and myself, and may be considered as approximating very nearly to the truth.”

That’s means that among the 100,000 souls; Mughs 60,000, Muslims 30,000 and Burmese 10,000. So in the date of conquest of Arakan by the British, there remained thirty-thousand Muslims and these thirty thousand Muslims were living there from before, now their descendants and successors have increased leaps and bounds.

No one in British Burma would dispute that there was a group of “Arakan Muslims” who could indeed trace their roots back to the 17th Century and even earlier and who were quite distinct from the Chittagonians and Bengali immigrants to Arakan.

According to the censuses of both 1921 and 1931, it has clearly mentioned that, ‘There was a Muslim community in Arakan, particularly in Akyab District, who prefers to call themselves Arakan-Mahomadens and were quite distinct from the Chittgonians and Bengali immigrants to Arakan.’ ‘According to Baxter report of 1940, paragraph 7, “This Arakanese Muslim community settled so long in Akyab District had for all intents and purposes to be regarded as an indigenous race.”

Who are indigenous races was defined in Article 3 (1) of the Union Citizenship Act, 1948, which states: “For the purposes of section 11 of the Constitution the expression any of the indigenous races of Burma shall mean the Arakanese, Burmese, Chin, Kachin, Karen, Kayah, Mon or Shan race and such racial group as has settled in any of the territories included within the Union as their permanent home from a period anterior to 1823 A. D. (1185 B.E.)”. These two categories of people and those descended from them are automatic citizens. They did not require applying to court for naturalization.

Hence, these Muslims of Arakan, who identify themselves as Rohingya, are for all intents and purposes to be regarded as an indigenous race and are also a racial group who had settled in Arakan/Union of Burma as their permanent home from a period anterior to 1823 A. D. (1185 B.E.).

According to the Mr. Sultan Ahmed, the then a member of the Constituent Assembly, ‘When section II of the Constitution of the Union of Burma was being framed, a doubt as to whether the Muslims of North Arakan fell under the section sub-clauses (1) (II) and (III), arose and in effect an objection was put in to have the doubt cleared in respect of the term “Indigenous” as used in the constitution, but it was withdrawn on the understanding and assurance of the President of the constituent Assembly, at present His Excellency the President of the Union of Burma, who when approached for clarification with this question, said, “Muslims of Arakan certainly belong to one of the indigenous races of Burma which you represent. In fact there is no pure indigenous race in Burma, and that if you do not belong to indigenous races of Burma, we also cannot be taken an indigenous races of Burma.” Being satisfied with his kind explanation, the objection put in was withdrawn.

Being one of the indigenous races and bona fide citizens of Burma, the Rohingyas were enfranchised in all the national and local elections of Burma: – during the later colonial period (1935-1948), during the democratic period (1948-1962), during the BSPP regime (1962-1988), 1990 multi-party election held by SLORC and 2010 General Election held by SPDC except 2015 November 8 Election. Their representatives were in the Legislative Assembly, in the Constituent Assembly and in the Parliament. As members of the new Parliament, their representatives took the oath of allegiance to the Union of Burma on the 4thJanuary 1948. Their representatives were appointed as cabinet ministers and parliamentary secretaries.

This is Burma Gazette Extra Ordinary issued by the Ministry of Home Affairs, dated 30th July 1949, letter No. 282/ HD- 49 in which it was, mentioned that the Arakanese Muslims of Maungdaw and Buthidaung townships of Akyab district as indigenous peoples of Burma.

The Rohingyas are Indigenous Race of Burma