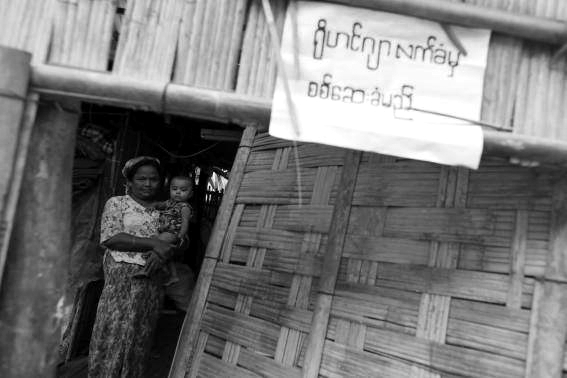 Ethnic identity is an essential human need that provides a sense of belonging and historical continuity and created a foundation on which to build a concept of self. It is an individual’s self-concept developed from knowledge of membership in a cultural group. Ethnic identity and self-identity has supported a strong relationship between the two.

According to Article 1 of the Universal Declaration of Human Rights, ‘All human beings are born free and equal in dignity and rights.’ For the ‘equal in dignity’ the right to self- identification is important. It is very significantly important to know differentially the incomparable difference between “ethnicity or ethnic group and ethno-religious group”. “Ethnicity or ethnic group” is a specific term to identify the ancestral background of each community who are eligible to belong an ethnicity—particular language, distinct culture, racial dress, populous territory.

The Rohingya are a nation with a population of more than 3 million (both home and abroad), having a supporting history, separate culture, civilization, language and literature, historically settled territory and reasonable size of population and area. They share a public culture different from the public culture of those around them. They are determined not only to preserve and develop their public culture, but also to transmit to future generations as the basis of their continued existence as people, in accordance with their own cultural pattern, social institution and legal system.

The term Rohingya is widely used by the international community to identify a group of Muslims of Arakan. According to Dr. Ganganath Jha of Jawaharlal Nehru University of India, the term Rohingya is derived from Rohang the ancient name of Arakan. The Muslims of Arakan called their country, in their own language, ‘Rohang or Roang’ and called themselves as Rohangya (Rohang+ya) or Roangya (Roang+ya) means native of Rohang or Roang. In Burmese it is ‘ရိုဟင္ဂ်ာ’, in Rakhine’s pronunciation it will read as ‘Rohangya’ but in Burmese pronunciation it became ‘Rohingya’ and now it’s established as ‘Rohingya’. Like other peoples of the world, they have needed to identify as Rohingya to some degree for centuries.

In the work of Arab geographer Rashiduddin (1310 AD) it appears as ‘Rahan or Raham’. The British travelers Relph Fitch (1586 AD) referred the name of Arakan as ‘Rocon’. In the Rennell’s map (1771 AD), it is ‘Rassawn’. Tripura Chronicle Rajmala mentions as ‘Roshang’. In the medieval works of the poets of Arakan and Chittagong, like Quazi Daulat, Mardan, Shamser Ali, Quraishi Magan, Alaol, Ainuddin, Abdul Ghani and others, they frequently referred to Arakan as ‘Roshang’, ‘Roshanga’, ‘Roshango Shar’, and ‘Roshango Des’. Famous European traveller Francis Buchanam (1762-1829 AD) in his accounts mentioned Arakan as “Rossawn, Rohhawn, Roang, Reng or Rung”. In one of his accounts, “A Comparative Vocabulary of some of the languages spoken in the Burman Empire” it was stated that, “The first is that spoken by the Mohammedans, who have long settled in Arakan, and who call themselves Rooinga, or natives of Arakan.” . The Persians called it ‘Rekan’.” The Chakmas and Saks from 18th century called it ‘Roang’. Today the Muslims of Arakan call the country ‘Rohang’ or Roang’ or ‘Arakan’ and call themselves ‘Rohingya’ or native of Rohang.

Rohingya is not simply a self-referential group identity, but an official group and ethnic identity recognized by the post-independence state. In the early years of Myanmar’s independence, the Rohingya were recognized as a legitimate ethnic group that deserved a homeland in Burma.

 On 31st December 1942, Brig-Gen C E Lucas Phillips of 14th British Army declared the North Arakan as “Muslim National Area” As per Public Notice No. 11-OA-CC/42. Then formed a Peace Committed headed by Mr. Omra Meah and Mr. Zahir Uddin Ahmed and entrusted for administration of the area. On 1st January 1945 Brigadier C.E Lucas Phillips became the Chief Administrator of the area and appointed members of Peace Committee as administrative officers of the area. The British recognized the Muslims of Arakan as a distinct racial group and the British officer-in-command promised to grant more autonomy in North Arakan.

 In 1947, Hon’ble Bo Let Ya the Deputy Prime Minister, came to visit Maungdaw, to expound the principles laid down in the constitution of the Union of Burma, but it appeared on the “New Times of Burma” that he addressed the inhabitants of Maungdaw as “Chittagonians” which was objectionable and contradictory in relation to the Muslims of North Arakan forming parts and parcel of Indigenous races of Burma. The Prime Minister U Nu expressed regrets for the use of wrong terms “Chittagonians” and as per letter No.153/22 PM 48 dated; 20 February 1948, instructed that it should be either “Arakanese Muslims” or “Burmese Muslims”. The term ‘Burmese Muslims’ published in the form of Press communiqué issued by His Excellency Sir Domon Smith, the Governor of Burma, on 27th September 1941.

 On 30th 1949, the Ministry of Home Affairs issued a Burma Gazette Extra Ordinary, as par letter No. 282/ HD- 49, in which it was, mentioned that the Arakanese Muslims of Maungdaw and Buthidaung townships of Akyab district as indigenous peoples of Burma.

 On September 1954, U Nu, the first elected Prime Minister of Burma, in his radio address to nation, announced that, “The people living in northern Arakan are our national brethren. They are called Rohingyas. They are on the same par in the status of nationality with Kachin, Kayah, Karen, Mon, Rakhine and Shan.”

 On 3rd and 4th November 1959, U Ba Swe, Prime Minister and Minister of Defense Affairs, in the public meetings of Maungdaw and Buthidaung, announced that, ‘The Rohingyas are equal in every way with other minority races like Shan, Kachin, Karen, kayah, Mon and Rakhine. They have lived in Burma ages according to historical facts. There is historical evidence that they have lived faithfully and harmoniously with other races of Burma.’

 On 4th July 1961, Brig-General Aung Gyi, Deputy Chief of Staff, officially explained that, ‘On the west, May Yu district borders with Pakistan. As is the case with all borderlands communities, there are Muslims on both sides of the borders. Those who are on Pakistan’s side are known as Pakistani while the Muslims on our Burmese side of the borders are referred to as ‘Rohingya.’ Here I must stress that this is not a case where one single race splits itself into two communities in two different neighbouring countries. If you look at the Sino-Burmese border region, you will see this kind of phenomenon, namely ‘adjacent people’. To give you a concrete example, take Lisu of Kachin state, or La-wa (or Wa) and E-kaw of the same Kachin State by the Chinese borderlands. They all straddle on both sides of the borders. Likewise, the Shan can be found on the Chinese side as well as in Thailand – and they are known as ‘Tai’ or ‘Dai’ over there…They speak similar language and they have a common religion.’

 As a Burma’s racial groups, they participated in the official “Union Day’ celebration in Burma’s capital, Rangoon, every year.

 To satisfy part of their demand, the government granted them limited local autonomy and declared establishment of Mayu Frontier Administration (MFA) in early 60s, a special frontier district to be ruled directly by the central government.

Thus, the Muslims of Rakhine region over the centuries have had many terms by which to identify themselves, including the terms Rakhine Muslim, Arakan Muslim, and Rohingya, the last of which has become more prominent in recent times.

However, the Rakhine nationalist claims that, the term Rohingya was created in the 1950s to promote the political demands of the Bengalis in Myanmar.

Ethnic identity is not a God-given thing, but different forms of identities are invented and reworked thorough space and time. That’s why the process of identity formation is known as ‘social construction’. And Ethnicity is not just a ‘thing’ but also a ‘process’ in which the state actors impose identities, and the people themselves actively articulate their own identities for the sake of political and material livelihood.

As Burma and Arakan state are the products of the nation-sate formation through a relatively long, history, The name ‘Rakhine’ and the place ‘Arakan’ have been “invented” at particular points of time, just like the name “Rohingya’ was invented another points of time. If Rohingya ‘migrated’ from Bangladesh of somewhere else at one historical point of time Rakhines must have ‘migrated’ at similar or another historical points of time. But immigrating earlier of later does not negates the problematic reality that both groups have migrated from somewhere else. None of these groups fell from the sky. The claim that the name ‘Rohingya’ is invented is unacceptable and completely contradicts the very foundational understanding of ethnicity and ethnic identity.

Since 1942 — -the Rakhine Buddhists pushed the Muslims from the southern Arakan to the northern Arakan.

Since 1962 — successive military regimes denied their citizenship right by labeling that they are illegal immigrants from Bangladesh
.
Since 1982 — their right to citizenship denied and made them stateless people.

Since 2012— the Thein Sein regime rejected their identity and forcefully making them Bengali.

The Rohingya Muslims of Arakan, both home and abroad, believed that they belong to Burma and they are parts and parcel of indigenous races of Burma. They never try to be Bengali. At present there are more than 3 million Roghingyas both home and abroad. Their only blood related community is the Roai people, a third and fourth generation Rohingyas, who strongly believed that their ancestors were from Arakan or related to Arakan. Their population is round about 10 million lived in Cox’s Bazaar district and southern Chittagong district. These peoples are morally concerned to the Rohingyas Muslims of Arakan.

The Arakan problem can be easily solved to the satisfaction of all the stake holders if the Rakhine Buddhist is simply follow the golden rule of “Live and let Live”. This will definitely put an end to all the mutual ill-feeling and mistrusts; and there lies mutual happiness for all.