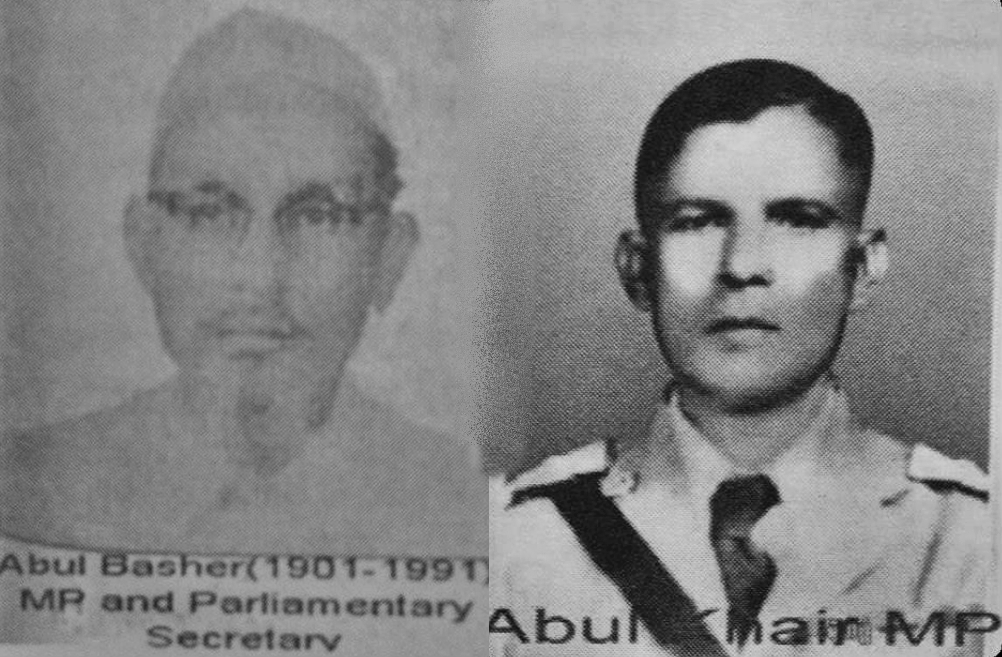 Since the holding of the Constituent Assembly elections till 1962 military takeover 3 general elections were held for both houses of Parliament in 1951, 1956 and 1960 respectively. In 1951 general elections Muslims won 5 seats, four in the Lower House and one in the Upper House. The AFPFL won 3 seats and the rest were captured by Ra-Ta-Nya (Rakhaing National United Organisation). The Muslims had no political party of their own. They stood either as independents or supportive group of AFPFL. In 1956 general elections Muslims retained all their five seats of north Arakan. The Ra-Ta-Nya won only about one third of the total seats; the rest were captured by AFPFL. Muslim MPs elected to the Parliament in 1956 were Mr. Sultan Ahmed, Mr. Abul Khair, Mr. Ezhar Mian, Mr. Abul Basher and Mr. Abdul Ghaffar. Prominent elected members of Ra-Ta-Nya were U Kyaw Min, U Maung Kyaw Zan, U Hla Tun Pru, U San Tun Khine, U Ba Sein, U Aung Kyaw Khine, U Paw Thein etc. A bye-election was held for Buthidaung north constituency in 1957 as the election of Mr. Ezhar Mian was challenged and the verdict was given against him. Mr. Sultan Mahmud, Ex-Parliamentary Secretary, in British India legislative Assembly, was elected and he was inducted into the cabinet of U Nu as Health minister.

The Rakhaing (Buddhist) members of Parliament formed their own Independent Arakanese Parliamentary Group (IAPG). They pressed for granting ‘State’ to Arakan in the parliament but initially they were not serious. The Rees Williams Commission set up in 1947 to examine the necessity of granting ‘States’ to different areas, earlier, kept aside the question of granting statehood to Arakan. Three more Regional Autonomy Commissions-Regional Autonomy Commission headed by minister U Nyo Tun (a Rakhine) formed in March 1948, Sir Ba Oo Commission formed in October 1948 and Kelleys Commission formed in 1950 — examined the question of granting State to Arakan.

The followings are the objection of Mr Abul Bashor MP from No. 2 of ConstituencyButhidaung and Mr. Abul Khair from No.2 Constituency of MaungDaw:-th the right of Self rule; the power of formation of Army should be vested in the national Parliament only and rather than appointing an Arakan affairs minister and council Arakan division council should be formed which would be more effective. After four years of enquiry, in 1952, although Sir Ba Oo Commission could submit its report on Karen and Mon Affairs, the report of Arakanese Affairs could not be submitted for reasons best known to them. The Kelly Commission was formed under the Chairmanship of Arakan Divisional Commissioner, Mr. Kelly, on 26th July, 1950 to enquire about the possibility of granting ‘State’ to Arakan. Extensive inquiries and investigations were made. But the report of the Kelley Commission was not officially announced. So the question of granting ‘State’ to Arakan lingered on without arriving to a decision. Throughout their Parliamentary tenure the Ra-Ta-Nya members acted in an unfriendly manner against the Rohingyas.

They branded Rohingyas as ‘Kalas’ or Chittagonians and did not recognise Rohingyas as their equals. They always tried to distort the image of the Rohingyas and even accused Muslim MPs of masterminding illegal entry of large number of Chittagonians into Arakan with the tacit approval of AFPFL to win elections. They were allergic to citizenship question of Rohingyas. They incited Buddhist monks of Arakan to stage hunger strike against Mujahid insurrection and to use force against the Muslim Arakanese MPs on the question of making Buddhism State religion of Burma. The hostile attitude of the Ra-Ta-Nya members towards Rohingyas caused Muslim MPs to remain aloof from them and co-operate, rather, with Burman politicians When AFPFL was divided into two factions in 1958 the prospects of achieving Arakan State became very bright. Prime Minister U Nu declared that if he wins in 1960 elections, he would grant Arakan ‘State. Both the factions of AFPFL wooed the IAPC to their respective sides. But the Ra-Ta-Nya decided to support U Nu faction after getting his commitment.

The question of granting ‘State’ to Arakan was taken seriously by most of the Muslims as they feared that the Maghs would create a 1942-like situation if they come to power in Arakan. In response, the Muslims of north Arakan demanded ‘autonomy’ of their region to be directly controlled by the Central government in Rangoon without the involvement of any Magh officials or their influence whatsoever. Their minimal demand was the creation of a separate district governed by the Centre. Muslim MPs raised this demand also during the debates in Parliament and in the press. Many Rohingya Sociology-cultural organisations initiated frantic activities with reference to the Muslim status in Arakan.

Muslim members of Parliament likewise petitioned the government and the enquiry commission not to include their region in the planned Arakan ‘State’. They have no objection to the creation of such a state, but only without the districts of Buthidaung, Maungdaw and part of Rathedaung where the Muslims are in majority ……… These districts must be formed into a separate unit in order to ensure the existence of the Rohingya. Forcing the creation of a single State upon all of Arakan would be likely to lead to the renewed spilling of blood.

The followings are the objection of Mr Abul Bashor MP from No. 2 of Constituency Buthidaung and Mr. Abul Khair from No.2 Constituency of Maungdaw:-