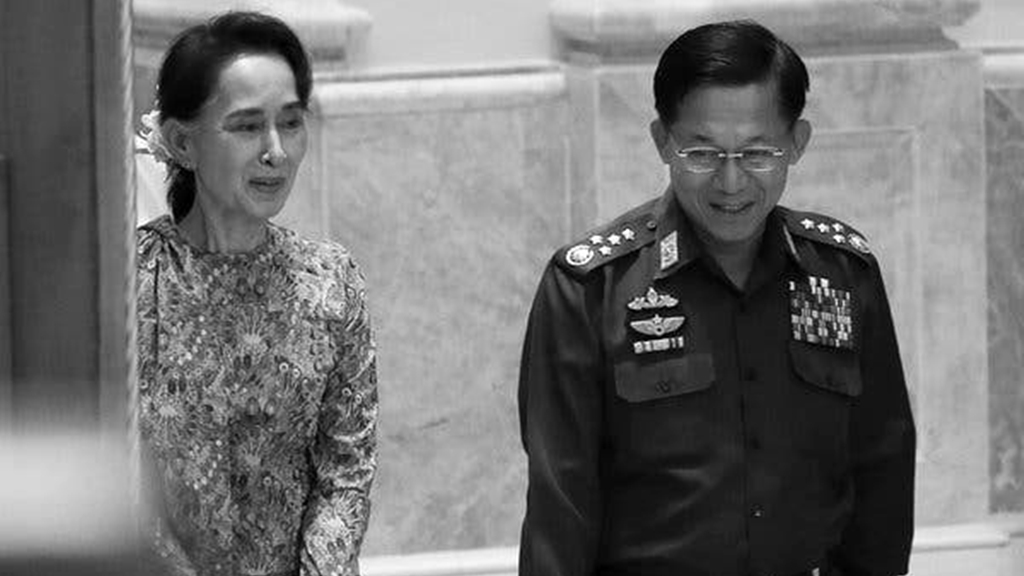 In the recent interview with Khin Maung Soe RFA Myanmar Service reporter, Stephen Rapp, an American lawyer and the former U.S. ambassador-at-large for war crimes issues in the State Department’s Office of Global Criminal Justice, told that “I’m extremely disappointed in her. I’m reminded of Nelson Mandela who instead of being under house arrest [like Aung San Suu Kyi] was under hard labor for 25 years in prison. When he came out, he did everything he could to reconcile the people of his country, to extend the message that people who had been enemies in the past — black Africans, South Africans of Indian heritage, the white population, the so-called Afrikaners — that everyone was welcome in that society. There was to be no ethnic or racial discrimination whatsoever, and he only held power for a relatively short period of time. He had no desire to continue to extend his power. Aung San Suu Kyi wants the military to back down and make her president and to continue in power for as long as she lives. That kind of personal commitment over the commitment of the future for all the people of Myanmar is what profoundly disappointments me, and I think she’s now unworthy of the Nobel Prize which she won almost 30 years ago.”

Many believed that there are many similarities between Aung San Suu Kyi and Mandela. Both came from relative privilege: He was the son of royals, she is the daughter of the revered Burmese General Aung San. Both became involved in democracy movements and both were jailed — he for 27 years, she for 20. During their respective imprisonments, they both emerged as national heroes, and later as worldwide democracy icons and Nobel laureates. Upon release, both drew criticism for embracing (at least politically) their former jailers. Mandela went on to become the president of his country, ushering in democracy and landmark constitutional reforms. Aung San Suu Kyi is only beginning her formal political career and is dealing with many of the same challenges that Mandela dealt with more than two decades ago.

Mandela faced a similar dilemma at the beginning of his presidency. His solution, in collaboration with Archbishop Desmond Tutu, was the creation of a truth and reconciliation commission that documented the effects of apartheid, administered reparations to victims, and created a mechanism for prosecuting human rights abusers who did not seek amnesty. Reparations and a public reckoning with the crimes of the apartheid regime were to replace formal criminal justice. The commission is widely hailed as a pivotal part of South Africa’s transition and essential to uniting a fractured country.

However, Suu Kyi does not like to do so, she did not support the creation of a tribunal in which “those in the previous military regime would be dragged to pay for their sins.” In 2012, she told to the Associated Press that, “What I want most of all are reconciliation and not retribution”.

But her position on the matter, rather than unite the Burmese, has rubbed many the wrong way. Many of those who have suffered the most at the hands of the country’s military regime — dissidents and ethnic minorities struggling for autonomy — want justice for past abuses, while others accuse her of siding with the military at their expense.

Mandela faced some of the same criticisms when he welcomed members of the previous government into his own administration, choosing to work side by side with the men who jailed him. Now, however, he’s remembered as a genius at “the grand gesture of reconciliation.”

One wonders what lessons Aung San Suu Kyi must draw from Mandela’s revered, but complicated, legacy. With a truth and reconciliation process all but off the table, how does she plan to heal the country’s wounds?

However, during the past few days, there has been nobody including the media seemed quite sure how to characterize Aung San Suu Kyi, once spoken of in the same hushed tones as Mother Teresa, Nelson Mandela and Mahatma Gandhi.

There has been a perceptible awkwardness as journalists recording her arrival at the International Court of Justice each morning have steeled themselves to shout the obligatory questions: “Are you here to defend the indefensible, Ms Suu Kyi?” and “Will you continue to deny genocide?”

For the Nobel laureate, here to deny allegations that Myanmar’s military committed genocide against minority Rohingya Muslims, one imagines the experience must be equally surreal.

Once accustomed to bathing in the unqualified adoration of the media, each morning in The Hague her routine has been the same: exit the car on the side furthest from the journalists. Walk straight in the imposing main door. Don’t speak. Don’t look back.

Not looking back has become something of a habit for the Oxford-educated politician whose father, General Aung San, who was assassinated just six months before independent, was the premier of Burma responsible for bringing about independence from British rule in 1948.

Now she is 74, with what once looked like her own life’s work – the defence and promotion of democracy based on the strength of the individual, not the state – already tattered and torn and perhaps facing its coup de grace at the UN court.

As she took to the podium before the 17 judges on Wednesday, she had abandoned her usual colourful appearance for a more toned-down dark blue suit and light scarf.

She appeared composed, though there were times when that calm failed slightly and she seemed flustered for a few seconds – perhaps wondering if her fall from international grace will soon be put beyond doubt by that terrible word “genocide”.

The question, “celebrity or villain?” may be answered for posterity this week, but Aung San Suu Kyi has made abundantly clear in the past that she sees herself as a politician, nothing more, nothing less. In 2015 she told that “I am just a politician. I am not quite like Margaret Thatcher, no. But on the other hand, I am no Mother Teresa either. I have never said that I was.”