We. the Rohingya refugees filled with concern over the agreement signed by the Government of Bangladesh and Burma for our repatriation. We are In utter confusion and apprehension whether the agreement deals with the basic cause of our problem as well as our status, safety and rehabilitation after we have gone to our ancestral homeland – Arakan. Over and above, we are also filled with fear and frustration whether the State Law and Order Restoration Council (SLORC), which is persistently violating human rights and freedom across the nation and refusing to transfer power to the elected people’s representatives, will rehabilitate all the refugees in their original hearths and homes, while the exodus is still continuing unabated.

It may be recalled that we. the Rohingyas have long been subjected to genocide, persecution, suppression. forced labour, rape and extermination at the hands of the Burmese authorities and repressive functionaries under the false and fabricated allegation that we are illegal immigrants or Bangladeshis, in utter disregard of our history, glorious past and Sultanate in Arakan. Prior to present operation about 1.2 million of our people had already been expelled who have been languishing in many countries of the world.

The repatriation agreement must be based on resolving the fundamental issue of the problem which will ensure our indigenous status, full security of our life, honour, dignity and property without any sort of infringement and Impediments in respect of our basic human rights and freedom. Mere repatriation of the refugees Is not a solution to our problem.

Our repatriation is a question of life and death for the entire Rohingya community. And. we. therefore, fervently appeal to the Government of Bangladesh. International community, the United Nations, the Organisation of Islamic Conference (OIC) and Muslim countries to pressurise the military regime of Burma to immediately concede to the following demands before repatriation : –

“The Government of Burma must declare in unequivocal terms that the Rohingyas are one of the Indigenous ethnic groups of the Union of Burma entitled to all human rights and freedom to be guaranteed by the constitution, at par with other nationalities of the country. To this effect, citizenship certificates authenticating our indigenous status must be issued to us before repatriation.” 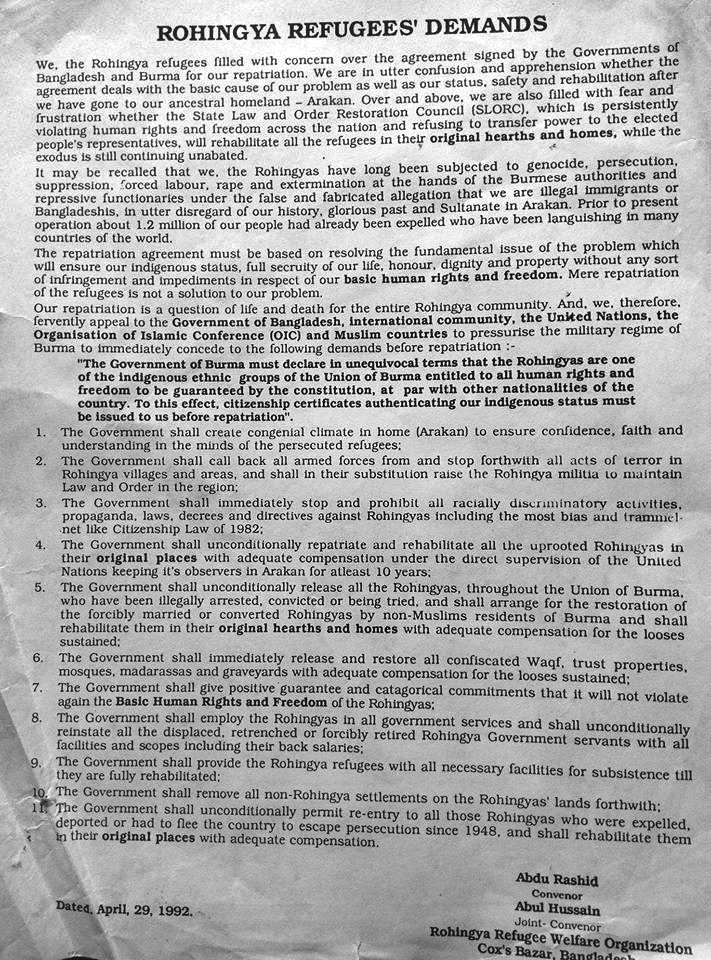