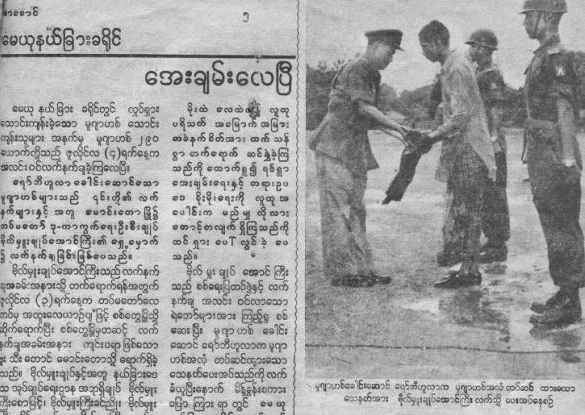 “Man distinguished from animal is by his struggle for recognition.” Hegal

Soon after independence, the Anti Fascist Peoples Freedom League (AFPFL) regime dismissed a great many Muslim officers and officials and replaced by Arakanese Buddhists who increasingly offended the Muslim community, discriminating against them, putting their elders to ridicule and treating them arbitrarily. The authorities made no effort at all to correct the wrongs against Rohingyas. The immigration authorities imposed limitations of movement upon Muslims from the regions of Maungdaw, Buthidaung and Rathedaung to Akyab. Thousands of Muslim refugees who were forced to flee in 1942 to India were not allowed to return. Their properties had been confiscated.

The wounds of 1942 massacre were yet to be healed when the Muslims were meted out step-motherly treatment by the Burmans in 1947. Added to these grievances, the new harassment and atrocities inflicted upon the Muslims were just like throwing them from frying pan to the fire. The Muslims were becoming more certain now that their existence and survival is in great danger. One Mohammad Jafar, popularly known as Jafar Kawal, a Japanese trained Rohingya, started organising the people. He ignited the conscience of the Muslim masses by singing lyrics of poet Iqbal of Indian sub-continent and urged them to sacrifice their property and lives in defence of their faith, honour and dignity. The Muslims readily responded. Jafar started recruiting and training Mujahids.

In 1949, Arakanese Communist Party (ACP) leader Tun Aung Pru met Jafar kawal and agreed to fight together until the fall of the AFPFL’s government with the understanding that Mujahid would take the western side of Kaladan River, whereas the rest of the Arakan would be under the control of Arakanese Communist Party (ACP). However,until 1949 no worth no mentioning encounter took place between the Mujahids and the government forces.

In 1949, the new Burmese administration formed a frontier security force known as Burma Territorial Force (BTF) with local recruits. In Arakan 90% of the BTF was manned with Arakanese Buddhists particularly those who are sworn enemies of the Muslims. The BTF under the direction of the Deputy Commissioner of Akyab district, Kyaw U, a Magh, unleashed a reign of terror in the whole north Arakan. Muslim men, women and children were mowed down by machine gun fire. Hundreds of intellectuals, village elders and Ulema were killed like dogs and rats. Almost all Muslim villages were razed to the ground. The BTF massacre triggered refugee exodus into the then East Pakistan numbering more than 50,000 people.

As the demands of the Muslims to correct the injustices, and allow them to live as Burmese citizens according to the law, and not to subject them to arbitrariness and tyranny, were not listened the Mujahid insurrection gained momentum and spread quickly, for the central government was busy putting down rebellion that broke out in other places in Burma and was unable to devote itself to Arakan. [1] The government, however, made some attempts to negotiate with the rebels. A government delegation came to them to hear them out but failed to bring any result. [2] In June, 1949 the 26th battalion, Union Military Police, stationed in Arakan mutinied and together with communists and PVO brought the fall of Kyaukpyu and Sandoway both being district headquarters. Thus government control was reduced to the port of Akyab only, whereas the Mujahids were in possession of all of north Arakan, and other groups of Arakanese Buddhist rebels had other districts in their control. [3]

In the years from 1951 to 1954, government forces annually conducted large-scale campaigns against the Mujahids. Towns and police stations erstwhile controlled by Mujahids were recaptured by government forces. [4] During these campaigns a number of civilians were arbitrarily detained, tortured and killed. Many houses suspected of harbouring insurgents were burnt down. The Mujahids lost their effective control of the area for some time as a result of change of leadership and factional fighting. Around 1951 Mujahid-e-Azam, Jafar Kawal, was assassinated and one Mr. Abbas took over power.

Col. Rashid, an important lieutenant under Jafar Kawal broke away to establish his own faction at Fuimali, southeast of Buthidaung. Another firebrand commander, Qassim, later to be popularly known as Qassirn Raja declared himself chief of the Mujahids in the south of Maungdaw. There had been fighting between government forces and various factions of Mujahids. After 1954 Qassim became a major threat to the government and the Mujahids also reinstated their superiority in Maungdaw, Buthidaung and most of Rathedaung.

In the meantime the government took a strong political initiative to isolate the Mujahids from the Muslim masses. On 25th Sept. 1954 at 8:00 p. m., the then Prime minister of Burma, U Nu, in his radio speech to the nation declared Rohingya as an indigenous ethnic community. [5] All basic rights of Rohingyas had been restored to certain extent. The government tried to convince the Muslim leaders and Parliament members that it was a futile exercise to go on rebellion as the rights of Rohingyas had been restored. The politicians, fed up with factional fighting among the Mujahids, failing to see any chance of winning the war over the government and finding improvement in the political status of the Muslims, encouraged the people to take side with the government. The Mujahids, torn by in-fighting and growingly bereft of public support, found it increasingly difficult to survive. They committed various crimes and injustices against their own people losing the faith reposed on them by the people. Many villagers had to shift to towns to save themselves from Mujahid excesses.

Taking advantage of such a situation from November, 1954 the government launched an extensive campaign against the Mujahids code named ‘Operation Monsoon’. Major centres of Mujahids were captured and several of their leaders got killed.[6] Qassim fled to East Pakistan. The backbone of the Mujahid insurgency was broken. The Mujahid movement was further weakened as a result of more breakups in their rank and file, but lingered on. The government raised a volunteer force from among the local Muslims with the help of whom the Burmese army dealt a crushing blow to the Mujahids. In a bid to isolate the mujahids further, Prime Minister U Nu and Defence minister U Ba Swe visited Buthidaung and Maungdaw towns in 1959. They held big political rallies in those towns where they spoke of recognising Rohingya as an indigenous ethnic community of Burma like the Shan, Kachin and Karen. They also promised equal rights to them as citizens of Burma. [7] Meanwhile further division among the Mujahid factions occurred as difference of opinion arose against the government offer of establishing a ‘Muslim National Area’ in north Arakan with substantial local autonomy. Ultimately the Mujahids decided to lay down their arms and before the end of 1961 most of the Mujahids surrendered to the Government.