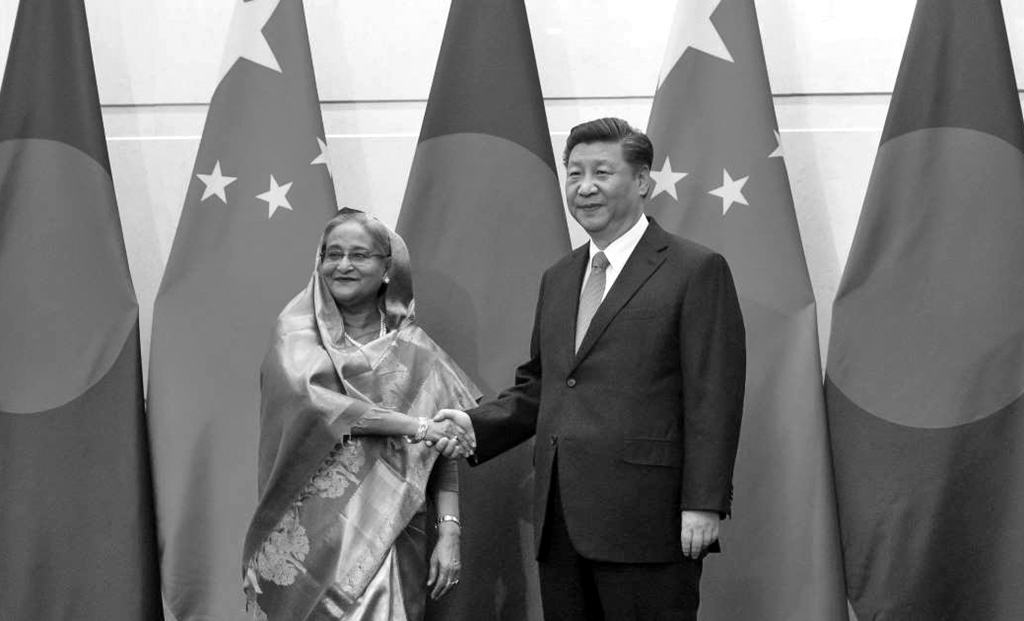 Prime Minister Sheikh Hasina went to China yesterday (1st July, 2019) for four-day official visit. During this visit she will keep the Rohingya issue on its priority list for discussion.

In 2017, as Myanmar military began a crackdown on the Rohingya ethnic minority group, over one million fled the Rakhine state and took refuge in Bangladesh. In today’s world, Rohingya refugee is the highest size of refugees. A developing nation like Bangladesh has to bear the expenditure of hundreds of millions of dollars each year towards food, housing, medical and other basic needs of these unfortunate people.

Ever since the emergence of this crisis, Bangladeshi Prime Minister Sheikh Hasina and her government have left no stone unturned to mobilize global communities in putting pressure on Myanmar to resolve the crisis immediately. Unfortunately, until now, none of the world body or the mighty nations in the world, including the United States, China, Russia, and India, in particular, are showing real interest in this issue, except for some mere lip-service, while China and India in particular, as well as Russia, are silently siding towards Myanmar. Even, the United Nations Security Council (UNSC) has failed to take action, hindered by Russia’s and China’s use of their veto powers.

Since the UN has failed to resolve the crisis, Bangladesh need to work with the powerful regional forces such as India, China and Japan to drum up support for a durable and early solution. Japan has expressed its full support to the Rohingya repatriation issue. India has not been much supportive of Bangladesh’s efforts and has rather expelled many Rohingya refugees who took shelter in the country. Further, India never extended its support to Bangladesh in any international forum to solve the crisis. Indeed, Dhaka has failed to secure any support from notable Myanmar-backers such as China, Russia and India, who have economic and military ties worth billions. As a result, Bangladesh seems to have failed to prove itself as strategically more important than Myanmar. This may hopefully change with this visit of Prime Minister Sheikh Hasina to China to press the Rohingya issue for a solution.

China’s interest in the Rakhine state stems from its strategic location and rich resources. The state is located on the Bay of Bengal, which opens into the Indian Ocean. Like Pakistan’s Gwadar port, which enables Beijing to transport West Asian oil, gas and other commodities through a shorter route via Pakistan to underdeveloped western China, the long Rakhine coastline provides southern China with access to the sea and eastern China with a shorter route to the Indian Ocean. Ports and pipelines in Rakhine significantly free China’s trade with Africa and West Asia, especially its oil imports, from dependence on the congested Straits of Malacca.

Moreover, Rakhine is rich in natural resources. Large gas reserves were discovered in the waters off its coast in 2004. China has bought gas from the area and transported it from Kyaukphyu on Rakhine’s coast to China’s Yunnan Province through the Myanmar-China Gas Pipeline since 2013. This gas meets the needs of China’s Yunnan, Guizhou and Guangxi provinces as well as that of other counties and cities. Since April 2017, oil from Rakhine is being transported to China through a pipeline running parallel to the gas pipeline. China is said to have invested around $2.5 billion in the oil and gas pipeline projects and is also investing $10 billion in the Kyaukphyu Special Economic Zone, which will include a deep-sea port and an industrial park, with the goal of turning Kyaukphyu into a maritime economic hub.

The Rakhine state plays a significant role in China’s Belt and Road Initiative (BRI). Like Gwadar port in Pakistan, Kyaukphyu port and Myanmar will be important links in both the Maritime Belt and Silk Road components of the BRI. As a result, the “stability of Rakhine” is regarded as “important” to the success of the BRI. The violence and unrest in Rakhine could have impact on the success of its projects in Myanmar and the BRI, in particular, underlie China’s interest to end the Rohingya crisis and restore stability in the region.

China’s Strong Ties with Bangladesh China has similarly invested heavily in upgrading and building port infrastructure, roads, bridges and railway lines in Bangladesh too. It is also Bangladesh’s top trade partner; Bangladesh provides a large market for Chinese goods. Defense ties are strong as well; Bangladesh is the second largest importer of Chinese weapons (after Pakistan) and accounted for 82 percent of all Bangladesh weapons purchases between 2009–2013. China is also keen to protect its strong and growing interests and ties in Bangladesh.

Now, the ball is in the Court of China. China is a critical player in all this. It is in China’s best interest as well as that of the region to bring about a sustainable conflict resolution without losing any time. Chinese policymakers need to act responsibly for about one million refugees who are living in dire and desperate conditions in Bangladesh.

The Rohingya crisis, if not resolved soon, may haunt the entire Southeast Asian region. And the difficult terrain of mountains and forests is most suitable to sustain long-term guerrilla warfare both against Myanmar and China, and that would be extremely costly to endure.

China is the biggest stakeholder in this turmoil. A radicalized region is going to be a major roadblock for China’s Belt and Road Initiative (BRI) as well as to maintain the gas-oil pipelines carrying 80 percent of China’s imports that come from the Middle East and Africa.

There is no room for military solution to neutralizing radicalized groups. The deep-rooted issues that give rise to them must be addressed. For a peaceful, stable region nothing short of a comprehensive approach is going to work. That means Myanmar should take Rohingyas back, giving them full citizenship status, respecting their rights and dignity under the supervision of the international community. Rohingyas need to be rehabilitated, their homes rebuilt and their lives restored.

This crisis indeed is going to be a stain on the leadership of China and other countries for a long time to come. Even a drop of conscience should compel Chinese policymakers to act responsibly for about one million refugees—according to the most recent UN assessment—are living in dire and desperate conditions in Bangladesh, a poor country itself.

Looking back, when Rakhine residents including Rohingyas revealed the damages they faced due to the Chinese gas-oil pipeline project (from Rakhine to Yunnan province of China), had China given the local residents fair compensation for the expropriated lands for China’s pipeline project, things might have turned out differently. The compensations for Rakhine residents would have been only a tiny fraction of the enormous benefit China would receive every year by bringing in gas and oil through Rakhine instead of through the distant Strait of Malacca and the risky South China Sea.

A stable and developed Rakhine would have been conducive to China’s expressed greater vision of the regional developments in which China would remain an indispensable and dominant player. The possibility of a win-win state of affairs was nipped in the bud. Now, a costly quagmire in the form of a mega humanitarian crisis has emerged.

How costly can it become? As Ruby Amatulla, the Executive Director of the US-based Muslims for Peace, Justice and Progress, and the Bangladesh-based Women for Good Governance, rightly says, China does not need to go far to look for an answer. The story of Vietnam is good enough. More than half a century ago, if America had spent USD 500 million to help build the infrastructure of Vietnam (then an American ally) after the World War II devastation, and addressed the economic crisis the Vietnamese were facing, as was suggested by an expert and American official posted then in Vietnam and as Ho Chi Minh himself was eager to work with America at that time, the entire Vietnam war could have been avoided. Instead, the American leadership abandoned the path of helping others who needed it most—the path advocated both by President Woodrow Wilson in the 1920s and Franklin D Roosevelt in the 1940s to help build a peaceful and progressive world—and embarked on a path of prejudice, cynicism and military confrontation. The vigorous persuasion of the vested interests, the military industrial complex, and the neoconservatives using fear-mongering has helped derail the decision-making process of the superpower. The consequence: a futile war that took about 55,000 American lives, killed over one million people in the region, and cost American taxpayers 2,000 times (USD 1 trillion in 2011 valuation) that of the meager USD 500 million that was to be given to help Vietnam. The trust and political capital that this sum of money could have earned at that time would have brought about new heights of America’s position in the world and a paradigm shift in our time. A golden opportunity was squandered in the early 1950s, which, if used, could have brought the Cold War to an end much sooner. Moreover, it could have achieved many of the foreign policy goals at the fraction of the price the US paid later.

This is the price for deviating from principles, for ignoring the sufferings of a people, and for having the arrogance to think that military power is going to fix everything. China and Myanmar today have a lot to learn from America’s blunder.