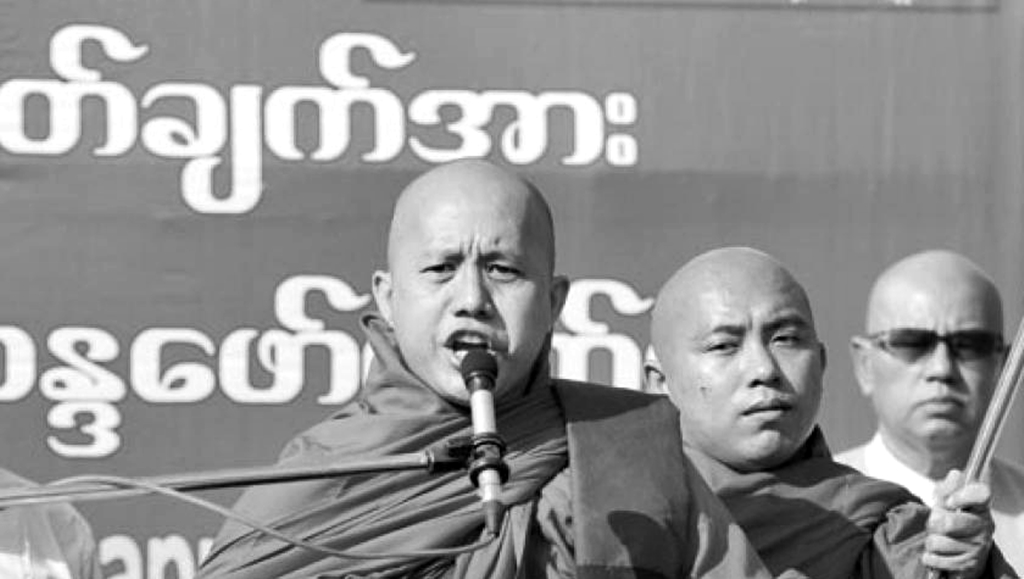 Genocide is often preceded and accompanied by widespread hate speech. The leaders who planned mass killings in the Holocaust, Rwanda, and Srebrenica disseminated ideologies of hatred to spur their followers to act, to cow bystanders into passivity, and to justify their crimes.

A campaign of hate speech that actively dehumanizes Muslims plays a key role in sustaining violence across Burma. This is not limited to the Rohingya, and in fact, anti-Muslim sentiment has evolved to the point that a range of anti-Muslim prejudices have now normalized in mainstream Burmese discourse. A tense inter-faith atmosphere has resulted in Muslim grievances finding an unreceptive ear even among many liberal and pro-democracy activists, and small triggers rapidly escalating into mob violence. The eruption in July 2014 in Mandalay, Myanmar’s second-largest city, was such violence where a mob destroyed several Muslim businesses, and resulted in the deaths of two people.

Burma’s Rohingya Muslims, one of the world’s most vulnerable minority groups, have frequently been likened to snakes, savages, and mad dogs. One of the predominant causes of violence against minority groups is the belief that those of the minority group are lesser human beings; hate speech is a tool that helps fuel this belief. In Rwanda, the Tutsis were called “cockroaches,” and during WWII, Jews were compared to “vermin.”

Many hate speech disseminators, including prominent monks of Ma Ba Tha and politicians, maintain Facebook accounts that cater to a large audience and publish original content on a regular basis.

Monk Wirathu’s anti-Muslim tirades constitute some of the most flagrant examples of hate speech. He has compared Rohingya (whom he derogatorily refers to as illegal Bengalis) to African carp, which he describes as violent, cannibalistic, and rapidly breeding, and he preaches that Buddhists ought to be relieved of the “burden” of Burma’s minority Muslims.

Wirathu’s vitriolic hate speech has directly contributed to mass violence against various Muslim groups throughout Burma, including both Kaman and Rohingya Muslims in Arakan State, and Burmese Muslims in central Burma. Far from intervening in Wirathu’s anti-Muslim propaganda, Burmese President Thein Sein has defended him, censoring publications that criticized his bigotry and calling him the “son of Buddha.”

The UN Special Rapporteur on the human rights situation in Burma has documented how hate speech was wielded against Muslims via sermons and the distribution of videos and leaflets prior to the Meiktila violence in March 2013 that killed dozens of Muslims, including at least 32 schoolchildren. He also saw police intentionally failing to intervene during the first two days of violence to protect local Muslims and control the violent mobs.

Social media and mass protests in Burma have propagated hate speech against Muslims as well. Freedom House’s 2013 “Freedom on the Net” report noted that people in Burma are using Facebook as a tool to spread hate speech against Rohingya. At a February 3 protest in Arakan State, an Arakan crowd demanded that Rohingya be stripped of voting rights and access to humanitarian aid, and demanded that police forces be given authority to use force against Rohingya.

The previous Burmese government complicity endorses these public forms of hate speech, and it also actively supports hate speech by means of the legal code. Laws such as the 1982 citizenship law, which does not recognize Rohingya as citizens, propagate a legal discourse that says that Rohingya are not worthy of basic human rights. Other discriminatory policies against Rohingya include strict travel, construction, education, and marriage restrictions, denial of land ownership, and a two-child limit in certain areas of Arakan State.

The UN Special Rapporteur on freedom of religion or belief writes in his December 26 report that in corrupt authoritarian political environments, one of the main remedies to hate speech is reconciliation through forums of discussion.

It is important to note that what the Ma Ba Tha propagates is often not explicitly ‘hate speech.’ However, “Hate speech is [no longer] necessary in order to construct a narrative of Muslim threat.” Instead, a range of anti-Muslim fears and prejudices are so ingrained in Burmese Buddhist society today that many see a credible existential threat from a population that by most current estimates is unlikely to exceed 5 to 10 percent. This fear has significantly lowered the barrier for potential mass violence against Muslims by rationalizing a need to ‘protect the Burmese race and religion’ from imminent threat and mobilizing support behind a series of restrictive and discriminatory policy measures. The proliferation of anti-Muslim stereotypes and narratives has propelled sectarian tension where small triggers in the form of rumors and false information can quickly become ‘viral’ and incite mob violence. For example, the Meiktila riot of March 2013, which was one of the country’s worst incidences of sectarian violence, began with a petty brawl at a gold shop and resulted in at least 45 and up to 100 deaths, and 1,500 destroyed homes.

There is no universal definition of hate speech. The American Bar Association defines it as, “Speech that offends, threatens, or insults groups, based on race, color, religion, national origin, sexual orientation, disability, or other traits.” Narrower definitions associate hate speech specifically with the incitement of violence. Harvard University’s Susan Benesch, who is one of the leading scholars on hate speech, coined the phrase “dangerous speech,” as examined in the context of mass violence, and identified it as, “Speech that has the potential to catalyze collective violence.” Her examination created a fairly simple framework to identify such speech and noted three framework components: “targeting a group of people, containing a call for action, and utilizing a dangerous speech hallmark”. Hallmarks of dangerous speech include comparing the targeted group to non-humans, as well as suggesting that they constitute a serious threat or that they are defiling a group’s integrity.

As a way to distinguish speech that is offensive from speech that can lead to harm, Susan Benesch, the Edith Everett Fellow at the Center for the Prevention of Genocide, presented her research on how to recognize “dangerous speech,” a subset of hate speech that has been shown to lead to violence, including genocide, in past cases. Dangerous speech, she said, is often characterized by dehumanizing language; targeted populations are called “rats” or “cockroaches”—or other reviled vermin—as a way to justify violence against them.

In Burma, there is no shortage of outright hate speech directed against the Rohingya and other Muslim groups. This is especially true in unfiltered online discourse, where incitements to violence and deeply offensive and derogatory terms are common. However, even offline, various derogatory terms targeting Muslims are common in everyday speech, most notably kalar (a particularly derogatory term for Muslims), mus (a less derogatory term), and Bengali (a widely used term that is not strictly derogatory, but implies a lack of belonging in Myanmar). Many of these terms are regularly employed during violence. It is becoming increasingly clear that certain types of hate speech can serve as both a warning sign and a catalyst of genocide and mass atrocities.

However, these hate speech campaign in Burma cannot be banned or remedied solely through inter-faith dialogues and seminars on cross-cultural understanding. These soft power strategies may be effective for long-term reconciliation, but in the short-term, the Burmese government must enforce justice and accountability measures to protect the rights of Rohingya.

After a year of dizzying gains, the Ma Ba Tha is entering a far more uncertain 2016. The November electoral outcome has come as a shock. The NLD landslide decimated the USDP, which had strongly allied itself with the Ma Ba Tha, and left no space for third-party candidates that had used religious nationalism as a central plank. The defeat is embarrassing to an organization whose key leaders had openly advocated against the NLD, but it may prove to have little material impact over the long run.

To date, the Ma Ba Tha has proven itself to be an adaptive organization. It learned from the mistakes of the 969 and is continually evolving and professionalizing its messaging, activities, and narrative dissemination. Today, the Ma Ba Tha has built a strong foundation of highly active and motivated monks who oversee a vast network of ground activities and partnerships, as well as a powerful communications and lobbying apparatus, all with proven results. The Ma Ba Tha is likely to continue to retain a significant base of support because its messaging endorses a range of anti-Muslim prejudices that resonate in the broader Burmese society. Much of what is considered ‘ultra-nationalist’ in the international media is closer to ‘center-right’ in Myanmar, and core Ma Ba Tha issues such as the denial of rights for the Rohingya, enjoy popular mainstream support. No electoral outcome or new government can easily change these deep-rooted prejudices, but it is possible to better understand their core themes and develop better counter-messaging and early warning strategies.

This is very likely that, the Ma Ba Tha is likely to remain a powerful force in Burma’s politics for some time to come despite the State Sangha Maha Nayaka Committee (Ma Ha Na) has recently disowned them. Furthermore, the organization is likely to remain centered around the guiding principles of its key personalities, which currently consist of anti-Muslim monks, such as Ashin Wirathu, Ashin Wimala, Ashin Parmoukkha, and other charismatic junior monks who are currently driving the message and overseeing Central Committee activities.. Several years of tolerance for their activities has made them powerful actors in their own right, but a concerted push by Myanmar’s government and senior and more measured members of the Sangha could begin to curb their excesses.