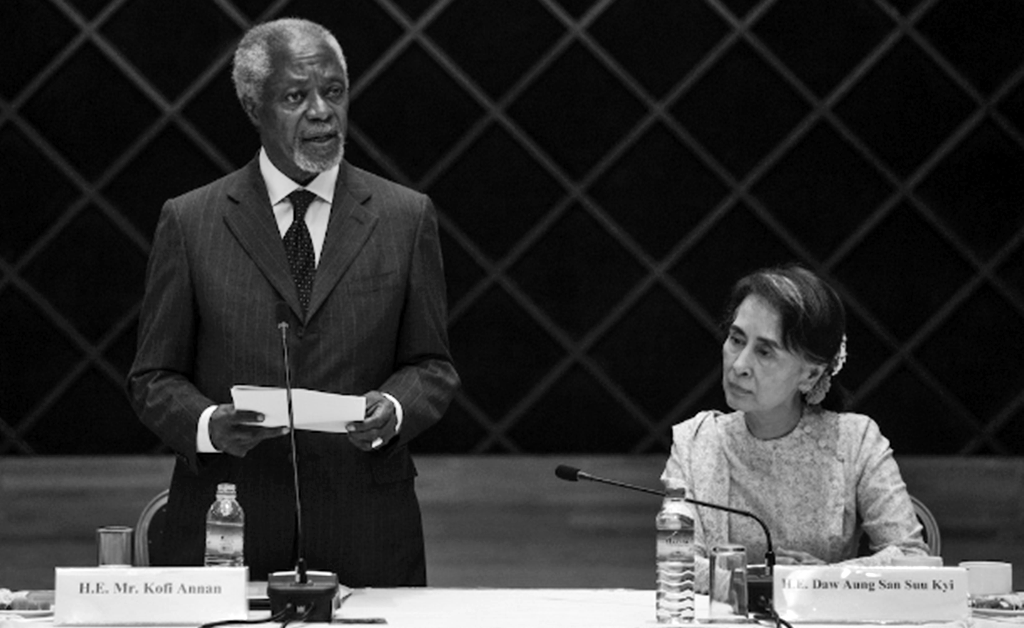 The Rohingya, a Muslim ethnic minority group in Myanmar, have been systematically disenfranchised and increasingly marginalized, including through denial of citizenship and restriction of movement. Over the years successive UN Special Rapporteurs on the situation of human rights in Myanmar have reported serious continuing human rights violations against this community.

Since 9 October 2016, Myanmar’s security forces have carried out large-scale attacks against the Rohingya population in Rakhine State’s Maungdaw, Buthidaung, and Rathedaung Townships as part of ‘clearance operations’ in response to attacks on three police border posts by armed assailants. These ‘clearance operations’ violate numerous provisions of international human rights law.

The ‘clearance operations’ involved human rights violations against women, men, and children, including: extrajudicial killings; enforced disappearances; torture and other ill-treatment, notably rape and other crimes of sexual violence; arbitrary arrests and detention; forced displacement; and destruction and looting of homes, food, and other property.

UN Office of the High Commissioner on Human rights (OHCHR) have chronicled extensive human rights violations by the security forces, including unlawful killings, arbitrary arrests, enforced disappearances, rape and other crimes of sexual violence, other forms of torture and ill-treatment, destruction of property and denial of humanitarian access. The UN Office for the Coordination of Humanitarian Affairs (UNOCHA) estimates more than 69,000 people have fled from Rakhine State for Bangladesh since October, while 92,000 people remain internally displaced in Myanmar.

The UN report has identified arson as a major cause of death. Testimonies collected from villages convey horrifying reports of women and children burned alive in their homes by soldiers. Numerous people claim the army deliberately set fire to homes and, in some particularly tragic cases, set fire to buildings and then pushed people into them. Eyewitnesses report several separate instances where both non-Rohingya villagers and the army locked several families of Rohingya Muslims into buildings and set fire to them. The report detailed “widespread and systematic” attacks against the Rohingya and reiterated “the very likely commission of crimes against humanity” – as had already been concluded by the High Commissioner in June 2016.

Myanmar’s government has flatly denied allegations that abuses have been committed, but has prevented independent journalists and aid workers from accessing parts of northern Rakhine. Under international pressure they are going to form commission after commission to investigate allegations of human rights violations; however none of these commissions are independent or credible.

Since October 2016, four official commissions have been set up to investigate the situation in Rakhine State. Regrettably, all of them lack the independence, impartiality, human rights and technical expertise, and mandate necessary to conduct a credible and effective investigation:

1. On 1 December 2016, Myanmar’s President Htin Kyaw established a 13-member investigation commission led by Vice-President Myint Swe, a former army general, to probe “the truth” in relation to violent attacks that occurred on 9 October and 12-13 November 2016 in Maungdaw Township. Its members include the current Chief of Police and a number of former government officials. The commission’s preliminary findings, published on 3 January 2017, dismissed claims of misconduct by Myanmar security forces, having found insufficient evidence to take legal action in response to alleged violations, religious persecution, and allegations of genocide. As the UN Special Adviser on the Prevention of Genocide, Adama Dieng noted on 6 February, this commission “is not a credible option” to investigate abuses against Rohingya.

2. Two commissions, formed by the army and the Ministry of Home Affairs (also controlled by the military) on 9 February and 11 February 2017 respectively, have been tasked with investigating human rights violations committed by military and police personnel during the ‘clearance operations’. These commissions, made up of military and police officers, lack the independence and impartiality necessary to investigate violations committed by security forces.

3. An 11-member commission appointed by the Rakhine State Parliament on 24 October 2016, composed predominantly of ethnic Rakhine members from the Arakan National Party (ANP), was tasked with investigating the 9 October attacks on the three police border post but excluded any probe into human rights violations against the Rohingya population. The commission’s chairman, ANP MP Aung Win, claimed in an interview with the BBC that rape of Rohingya women could not have occurred because they are “very dirty” and “they are not attractive so neither the local Buddhist men or the soldiers are interested in them.”

Moreover, another earlier commission, set up by then-President Thein Sein in August 2012 to investigate unrest in Rakhine State, failed to lead to accountability for human rights violations committed during successive waves of violence between June and October 2012. Approximately 140,000 people, predominantly Rohingya, were internally displaced and at least 200 were killed during the unrest. Given the inability or unwillingness of these commissions to establish facts and hold perpetrators accountable, and the fact that national judicial and law enforcement authorities lack the both the independence and technical capacity to deal with such situations.

All of them lack the independence, impartiality, human rights and technical expertise, and mandate necessary to conduct a credible and effective investigation. In according to Matthew Smith, founder of campaign group Fortify Rights, “The army has committed atrocity crimes and this commission is attempting a whitewash. Ministries led by Suu Kyi have charted the path of denial, waging a shameful propaganda campaign.” Phil Robertson, deputy Asia director at New York-based Human Rights Watch, termed these as ‘whitewash mechanism’.

An advisory commission was also established by Myanmar State Counsellor Aung San Suu Kyi on 24 August 2016. The commission consists of nine members, including three international experts with former UN Secretary-General Kofi Annan as its chair. However, its mandate is limited to making general recommendations to the government to “resolve protracted issues” in Rakhine State and both Annan and the Myanmar government have affirmed the commission will not investigate reports of human rights violations.

The Commission submitted its interim report on 16 March 2017 and its final Report on August 2017. On its final report the commission gave 88 recommendations. In the forward by the Chairman of the Commission, Mr. Annan wrote that, “With the presentation of our final report, the advisory Commission on Rakhine has fulfilled its mandate. Responsibility of our recommendations now lies with Myanmar leaders and institutions…….. We have suggested that the Government establish a mechanism to facilitate and track that process.”

Moreover, The Myanmar government has formed a four-member ‘independent’ commission to investigate allegations of human rights violations in the Rakhine state following attacks on security forces’ check posts in August 2018.

The commission’s formation was disclosed in a press release posted on the website of the Myanmar president’s office. According to the release, the Myanmar government established the commission as part of its national initiative to address reconciliation, peace, stability and development in Rakhine.

Since August 26 last year, more than 700,000 Rohingyas, mostly children and women, crossed into Bangladesh fleeing brutal persecution carried out by Myanmar security forces, and joined over 400,000 other Rohingyas who were already living squalid, cramped refugee camps in Cox’s Bazar.

Several thousands of people from the ethnic minority Muslim group are also living, under terrible conditions, on the no man’s land between the two countries.

However, Khin Ohmar, chairperson of Myanmar-based human rights advocacy organization Progressive Voice, told the Dhaka Tribune: “The commission has individuals from international community such as from the Philippines and Japan. But they do not have enough credentials or track record when comes to protecting human rights.

“No one knows how they got selected to be on the commission and what their mandate is.”

The rights activist said: “The process is discreet and lacks transparency. So we have no confidence in that. It’s neither independent nor impartial.”

Burmese authorities had numerous opportunities to launch credible investigations before, Ohmar said, like in 2017, when the UN found evidences of crimes against humanity carried out against the Rohingyas, but a national commission rejected that.

“And an army investigation into the 2017 attacks even determined that there were no deaths of innocent people. Clearly, Myanmar has no intention to launch a credible investigation,” she added.

Different Rohingya Diasporas also said that formation of such commission is not new and an independent and impartial investigation panel already exists in the form of the UN Human Rights Council-mandated Fact-Finding Mission (FFM).

But the government refused to cooperate with the FFM and the UN special rapporteur on Myanmar, Yanghee Lee, and did not allow them to enter Myanmar.

Hence, it is another whitewash mechanism f the Government of Myanmar to avoid international pressure.