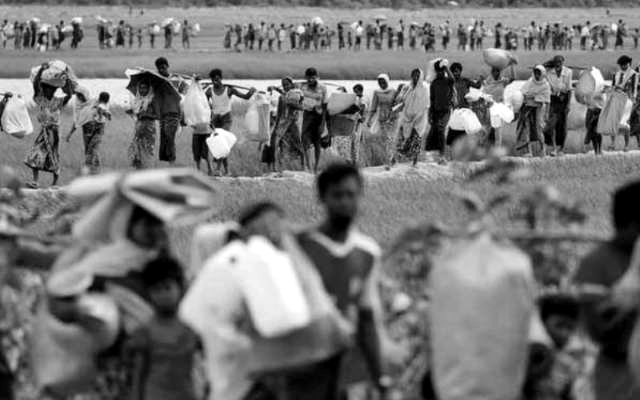 he term “genocide” did not exist before 1944. It is a very specific term, referring to violent crimes committed against groups with the intent to destroy the existence of the group. Human rights, as laid out in the US Bill of Rights or the 1948 United Nations Universal Declaration of Human Rights, concern the rights of individuals.

In 1944, a Polish-Jewish lawyer named Raphael Lemkin (1900-1959) sought to describe Nazi policies of systematic murder, including the destruction of the European Jews. He formed the word “genocide” by combining geno-, from the Greek word for race or tribe, with -cide, derived from the Latin word for killing. In proposing this new term, Lemkin had in mind “a coordinated plan of different actions aiming at the destruction of essential foundations of the life of national groups, with the aim of annihilating the groups themselves.” The next year, the International Military Tribunal held at Nuremberg, Germany, charged top Nazis with “crimes against humanity.” The word “genocide” was included in the indictment, but as a descriptive, not legal, term.

On December 9, 1948, in the shadow of the Holocaust and in no small part due to the tireless efforts of Lemkin himself, the United Nations approved the Convention on the Prevention and Punishment of the Crime of Genocide. This convention establishes “genocide” as an international crime, which signatory nations “undertake to prevent and punish.” It defines genocide as:

[G]enocide means any of the following acts committed with intent to destroy, in whole or in part, a national, ethnical, racial or religious group, as such:

Myanmar’s long history of promoting ethnic cleansing against the Rohingya culminated in 2012 with a widespread massacre of Rohingya throughout Rakhine state, which has led many legal experts, academics, and non-governmental organizations (NGOs) to label the atrocity the beginning of genocide in Myanmar.

The 2012 ethnic riots represent an escalation of the long-standing ethnic cleansing policies to those of genocide. More than 240 Rohingya, including children, were killed in the massacres that year. The actions, and inactions, of the Myanmar government throughout 2012 provide concrete evidence of ethnic cleansing and genocide policies against the Rohingya.

The 2012 sectarian violence in Rakhine state between the Rohingya and Rakhine ethnic groups erupted in June and October. The initial violence in June was sparked by the rape and murder of a 28-year-old Rakhine woman on May 28, 2012 by three Muslim men. In retaliation, on June 3, 2012, a large group of Rakhine men stopped a bus and beat and killed ten Muslims who were on board. The ethnic riot quickly intensified with mobs from both communities committing killings and arson. State security forces did nothing initially to halt the violence, but they soon joined in with the Rakhine mobs to attack and burn Muslim neighborhoods and villages.

By October, the violence against the Rohingya population became much more organized and deadly. In the months preceding October, local Rakhinese political party officials and senior Buddhist monks launched a public campaign to vilify the Rohingya and to label them as threats to Rakhine state. Concerned Rohingya raised the warning signs to local government officials who advised them to prepare to leave their village.

On October 23, 2012, thousands of Arakanese men armed with machetes, swords, homemade guns, Molotov cocktails, and other weapons attacked Muslim villages in nine townships throughout Rakhine state. According to Human Rights Watch, “in some cases, attacks occurred simultaneously in townships separated by considerable distance.” As in the violence earlier in the year, state security forces failed to halt the violence and even participated directly in the attacks. The deadliest incident occurred in Yan Thei village in Mrauk-U Township, where at least 70 Rohingya were killed, including 28 children who were hacked to death, 13 of who were under age 5. According to the UN Office for the Coordination of Humanitarian Affairs, close to 180,000 people were affected by the 2012 violence. Of these, 140,000 persons remain displaced, the majority of which are Rohingya, and an additional 36,000 people live in isolated villages with minimal access to public services.

The central government has failed to hold perpetrators of the violence accountable and has not sought eyewitness interviews for testimony regarding the killings. Rather, the government’s actions following the violence illustrate that is has no intention of pursuing justice for the victims. For example, the security services dumped bodies of Rohingya killed in the conflict at remaining Rohingya villages and ordered the villagers to dig mass graves for the deceased. Many of the dead Rohingya had their hands bound and exhibited gunshot wounds, which suggest that they were killed execution style rather than in self-defense. The killing of defenseless persons and the subsequent concealment and denial of those criminal actions, such as the burial of bodies in mass graves, are clear indicators of ethnic cleansing and genocide.

The actions of the local authorities, state security forces, and central government match historical signs of ethnic cleansing and genocide policies at work. Indicators present in Kosovo, Rwanda, and East Timor include a history of massacres against certain ethnic groups; hate and threat propaganda from leaders; justification created for killing an entire ethnic group; and armed groups organized against the target group.

These factors increase the risk of genocide and ethnic cleansing. Both are planned and organized by authorities and their agents. Their planning takes time to ensure compliance by authorities at all levels and passive acceptance of the policy by ordinary citizens. According to Oberschall, “collective violence tends to be perpetrated by authoritarian regimes that have a long record of oppression and human rights violations against minorities.” Research has shown that the target group is dehumanized in official propaganda and depicted as amoral or dangerous to society. Officials falsify history and present justifications for why the entire group, to include the elderly, women, and children, must be viewed as guilty.

The 1982 Citizenship Law codifies the illegality of the Rohingya in Myanmar, and the mob violence against the Rohingya in 1978, 1991, 2001, and 2002 demonstrate strong government support for the destruction and removal of the Rohingya from Myanmar. These examples adhere to Oberschall’s findings in his research: “quantitative research on indicators for large-scale ethnic collective violence and genocide has found that genocidal states have autocratic governments and a pattern of political exclusion and discrimination against some ethnic groups.”

Throughout Myanmar society, Buddhist nationalism, similar to that seen during the country’s independence movement from British colonial rule, has increasingly influenced the predominantly Buddhist society to expunge all foreigners. The 969 Movement serves as the head of this effort through its leader, the “rabble-rousing” monk known as Ashin Wirathu. The group has “espoused a form of ethno-religious nationalism that encourages Myanmar Buddhists to patronize only Buddhist-owned businesses and seeks to restrict interfaith marriages.” Following the 2012 ethnic riots, Time magazine portrayed Ashin Wirathu’s picture on its July 2013 cover as “The Face of Buddhist Terror.” The 969 Movement stokes anti-Muslim sentiment and seeks to “protect” Buddhism from “aliens” or non-native persons.

The government’s management of the aftermath of the June and October 2012 massacres deliberately inflicted on the Rohingya group “conditions of life calculated to bring about its physical destruction in whole or in part.” This is the third aspect of the definition of genocide in the 1948 Genocide Convention. Rohingya who fled the violence went to IDP sites throughout Rakhine state, with the largest 15 camps located in the area of the state capital, Sittwe. The populations in these sites lack many basic human needs such as sufficient shelter, medical attention, safe water, and latrines. The central government has made no attempt to facilitate a return of Rohingya IDPs to their villages. In contrast, the IDP sites populated by displaced Rakhinese are equipped with adequate food, water, and sanitation, and the government is actively working to return those individuals to their communities.

International humanitarian aid workers have not been fully allowed to return to their programs supporting the Rohingya population following the conflict. The Myanmar government expelled the NGO Medecins Sans Frontieres, the primary health service provider to the Rakhine, after January 2014 when the group released the numbers of victims it treated from violence in Rakhine state. Buddhist leaders have since advocated for the removal of all UN agencies and international NGOs from Rakhine state. Muslim IDPs are not allowed to leave the camps to pursue livelihoods because their movement is restricted by the state security forces. They are also not receiving humanitarian aid nor allowed to go to markets to buy any supplies. As a result, the Rohingya are suffering from acute malnutrition and are dying from easily treatable diseases. Myanmar authorities appear determined to “starve and sicken the Rohingya out of existence.”

The Myanmar government has thus perpetrated many key elements that threaten the existence of the Rohingya: denial of their right to citizenship; far-reaching state discrimination against them; facilitation of public hatred and violence against the Rohingya; and restriction from access to food, medicine, and other basic necessities of life. Together, these elements demonstrate that Myanmar’s policies against the Rohingya have escalated from long standing ethnic cleansing to the initiation of genocide. For those Rohingya trapped in the IDP camps, there is no escape from the brutality of the Myanmar government.

Outside of the camps, Myanmar’s ethnic cleansing and genocide policies have forced hundreds of thousands of Rohingya to flee their homeland to seek safety in neighboring countries: Bangladesh, Thailand, and Malaysia. According to Refugees International, from October 2012 to July 2013 immediately following the sectarian violence, an estimated 785 Rohingya drowned at sea in an attempt to reach safety in Myanmar’s neighboring states, compared to 140 in 2011. For those who succeed in reaching these countries, the Rohingya are still subject to continued human rights abuses due to their stateless status.

The international community established normative behavior for states that receive refugees through the Convention relating to the Status of Refugees (‘1951 Convention’), which was later amended by the 1967 Protocol. “These documents clearly spell out who is a refugee and the kind of legal protection, other assistance and social rights a refugee is entitled to receive.” Refugees are authorized under this Convention to receive several rights, to include the right not to be punished; the right not to be expelled; the right to work; the right to housing; and the right to freedom of movement. The Convention does not protect economic migrants, defined as persons who have not fled persecution, as they enjoy the protection of their own government when abroad.

However, Bangladesh, Thailand, and Malaysia have not ratified the Refugee Convention of 1951, and they do not have any domestic legislation for the protection of refugees. They view the smuggling of Rohingya into their territories as the illegal entry of economic migrants rather than as asylum seekers. Unfortunately for the Rohingya, there is limited space for the UNHCR to implement its mandate in these countries. The Rohingya journey to these countries where they face certain continued persecution in order to “escape systemic oppression, discrimination and human rights violations, and not only for economic reasons.”