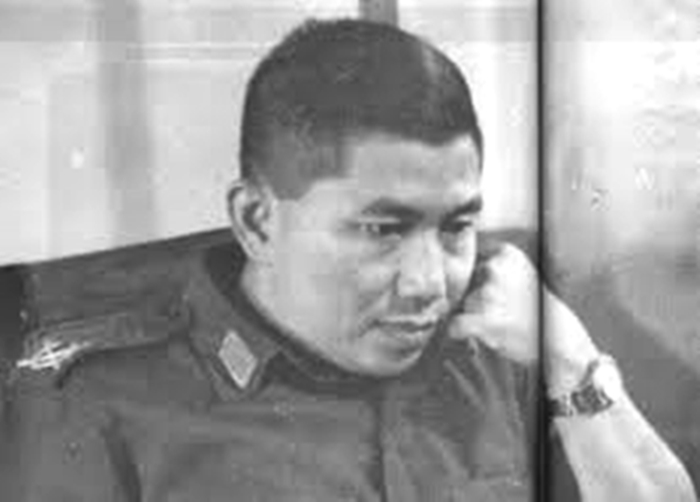 Brigadier General Aung Gyi (1919 -2012) was a Burmese politician and a member of General Ne Win’s 4th Burma Rifles rising to Brigadier General. He was born to a Burmese Chinese family in Paungde, British Burma in 1919. He played a role in the caretaker government of 1958-60 led by Ne Win. Aung Gyi was number two in the Union Revolutionary Council set up after the 1962 coup, serving as vice-chief of staff and Minister of Trade and Industry until he was forced to resign on 8 February 1963 because of disagreements over economic policy with Ba Nyein and Tin Pe. He was once known as Ne Win’s heir apparent.

Prior to the 8888 Uprising Aung Gyi had written several long open letters, widely distributed throughout the country, to Ne Win, critical of the government, and these became an important supporting factor to opposition movement. On 7 March 1988, Aung Gyi wrote his first letter to Ne Win, suggesting economic reforms and a new cabinet. He strongly criticised the government’s Burmese Way to Socialism and warned of possible social unrest. On 9 May 1988 he wrote a second 40-page open letter, reiterating the need for economic reforms.

Aung Gyi was among the few who attended the funeral of Ne Win in 2002 who spoke fondly of Ne Win’s achievements in helping bring independence to Myanmar in 1948, but he also stated that “Ne Win betrayed Burma and Ne Win betrayed the country. He committed rape of democracy in Burma by staging a coup. He died an inglorious death. It was a sad and tragic ending”.

On 4th July 1961, Aung Gyi who was a Brig-General and Deputy Chief of Staff at that time, officially explained that, ‘On the west, May Yu district borders with Pakistan. As is the case with all borderlands communities, there are Muslims on both sides of the borders. Those who are on Pakistan’s side are known as Pakistani while the Muslims on our Burmese side of the borders are referred to as ‘Rohingya.’ Here I must stress that this is not a case where one single race splits itself into two communities in two different neighbouring countries. If you look at the Sino-Burmese border region, you will see this kind of phenomenon, namely ‘adjacent people’. To give you a concrete example, take Lisu of Kachin state, or La-wa (or Wa) and E-kaw of the same Kachin State by the Chinese borderlands. They all straddle on both sides of the borders. Likewise, the Shan can be found on the Chinese side as well as in Thailand – and they are known as ‘Tai’ or ‘Dai’ over there…They speak similar language and they have a common religion.’

On 27 December 1988, U Aung Gyi in his speech told that, “The Union National Democracy Party (UNDP) has recognized Rohingya as national ethnic minority of Union of Burma who have been historically lived in Arakan Burma.”

It is his that speech, read it , like it and share it for self-identification, which is our unalienable right.