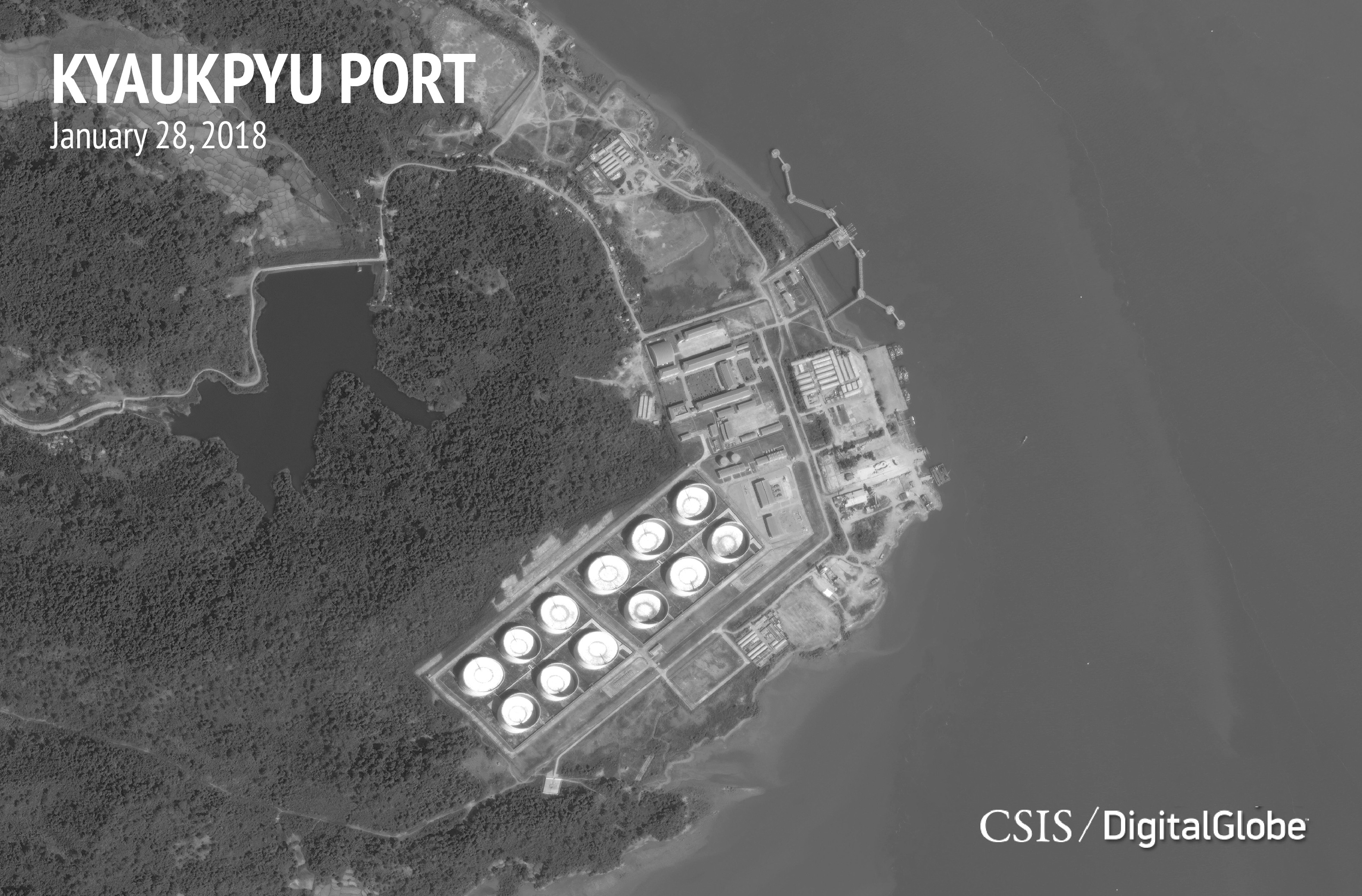 Arakan is not only the starting point of the Chinese pipelines but also a vital access point to Southeast Asia and the Indian subcontinent. Imports such as minerals and other raw materials from Africa as well as oil from the Middle East would be shipped through Arakan port (along with the Pakistani port of Gwadar) for sale on the Chinese market. It is for this reason that Arakan is of crucial significance to Chinese economic development.

In December 2009 and February 2011, China and Burma signed Memoranda of Understanding (MOUs) for the construction of the Kyauk Phyu Economic and Technological Development Zone including expansion of a deep sea port, railway, airport and industrial areas. Kyauk Phyu Special Economic Zone is located on Kyauk Phyu Township of Burma’s Arakan State.

Kyaukpyu is of particular interest to China because overland links between Myanmar and southern China can reduce reliance on the potential chokepoint of the Strait of Malacca. By eliminating the need to travel via the Strait of Malacca, Kyaukpyu Port would save about 5,000 kilometers in sailing distance for shipments traveling to China from India and points beyond. The drive to diversify its shipping routes – and to increase economic clout in neighboring countries – is a major impetus behind the new “Belt and Road” initiative, which envisions infrastructure and trade networks linking China with every part of the Eurasian continent. According to a feasibility study by CITIC Construction Company, the zone will require an initial investment of US$ 8.3 billion and a total US$ 89.2 billion over 35 years, using 120 Km² (30,000 acres) of land as well as 70 Km² of waterways.

Thus China’s strategic alignment with and inroads into Myanmar could have long-term serious security implications not only for India, but also for the long-term strategic interests of Indonesia, Thailand, ASEAN, Japan and the US.

As a result of increased Chinese influence in Burma India has sought in recent years to strengthen its ties with Burma. India’s interest in Burma is largely motivated by the country’s importance to its main economic and political rival, China. India is afraid of China’s influence in Burma.

Bhaskar Roy, The writer is a New Delhi based strategic analyst, writes, in the paper No. 6165, dated August 29, 2016, a research paper of South Asia Analysis Group’s, that, “For Beijing Myanmar is a strategic gateway to the Bay of Bengal and the Indian Ocean. It’s near to mid-term strategy is to turn Myanmar into a Pakistan. Naypidaw must study China’s activities in detail. China is pushing State Counsellor Suu Kyi to accede to its Belt and Road strategy. The China-Pakistan Economic Corridor (CPEC) which it is constructing in Pakistan is part of China’s 21st Century Silk Road. It emerges onto the Arabian Sea at Gwadar, where it has constructed a deep sea port, controlled and run by China. It has been designated as a defence establishment by the Pakistani government but is only nominally owned by Pakistan. The port is set to be a Chinese naval base in not too distant a future. Oil and gas imports from the Gulf, Iran and East Africa will be transferred overland to China from Gwadar port. The CPEC is being given security cover in Balochistan by a newly raised Pak army division. Most of the workers are from China. The Belt and Road project has a hidden strategy for China to provide security. Very soon the Chinese security force, that is the PLA, will be positioned along the CPEC. They will first come as advisors. Pak army has sold themselves and the country to China. With Pakistan being referred to as a state sponsor of terrorism it will have nowhere else to go but to China.”

According to another Indian security analysts, the Chinese presence on Coco Island should be seen in connection with the Sino-Pakistani defense project and cooperation on the Gwadar Port facilities, which give China access and basing facilities on the other side of the Indian subcontinent, near the Strait of Hormuz. What is especially worrisome from the Indian perspective is the ‘maritime encirclement of India’, with the Chinese based at Gwadar to the west of India and on Coco Island to the east. In addition, Burma’s experiments with a nuclear research reactor are worrisome from an Indian perspective, especially since China, Pakistan and Russia have all been involved. Indian analysts fear that China’s naval presence in Burma may allow it to interdict regional sea lanes of communication. On this account, Burma is emerging as the ‘single largest threat to Indian strategic interests in South East Asia’. In an effort to check this state of affairs, India has started its own campaign to woo the Burmese regime by providing military training and selling it arms and military hardware.

From a perceived China fear and with an objective to compete with China, India has been building up its military strength; has worked to close the gap with China by spending heavily on modern arms; and has been pursuing the closer relations with the United States. For its ‘Look East Policy’ India signed an agreement with Burma for the ‘Kaladan Multi-Modal Transit Transport Project’, which will pave the way to develop a trade route between its mainland and Northeast Region.”

Under President Obama’s Asia ‘pivot’ policy, the US Navy plans to relocate about 60 percent of its naval assets to the region. This would allow the United States to use the Bay of Bengal as a second theater in containing Chinese expansion beyond Myanmar. To this end, access to the Chittagong port and the Bay of Bengal would provide an excellent strategic fit for the US Navy.

The US, in a strategically cooperative relationship with Myanmar, plans to deny not only China a land access to the Bay of Bengal and Indian Ocean but also to neutralize overland oil pipelines grid from the Arakan coast to South China. It is said that, the full consummation of a Myanmar-United States strategic relationship would facilitate eventually a second land foothold for US on continental Asia in addition to Vietnam. The US may be utilized the Naval and Air Force bases of Myanmar as part of China Containment Strategy in some time in the future.

According to Andrew Korybko, a political analyst from Moscow, “The plight of the Rohingyas elicits understandable concern from many, but the unfortunate aspect is that the US is manipulating the world’s short-term emotional response to the current migrant crisis in order to pursue its long-term geopolitical interests in South Asia. The intended creation of a pro-American autonomous or independent Rohingyaland is akin to the same strategic pattern that it first spearheaded in “Kosovo”, except the US can now achieve its goals via the indirect Hybrid War lessons that it’s perfected in Syria. The crusade for state creation is inherently tied to the destruction of the targeted host state, which in this case would see Rohingyaland (and perhaps many other ethnic nation-states) being baptized through a sea of fire in separating from Myanmar. The US has concrete geopolitical reasons for why it supports the Rohingyas, chiefly concerning the establishment of its first intended base in mainland South Asia and its desire to cut off China’s non-Malacca pipeline routes through Myanmar. Additionally, with a firm regional outpost in Rohingyaland (whether direct or via proxy), the US can obstruct the multi-polar BCIM trade corridor and leverage influence in Bangladesh, Northeast India, the rest of Myanmar, and perhaps even further afield in Yunnan Province. The coming months will be indicative of how far the US plans to go in supporting Rohingyaland, but by all current indications, it seems that this is a cause which Washington won’t give up on anytime soon.”

The US’ interest in this corner of South Asia is predicated on the BCIM trade corridor that would connect Bangladesh, China, India, and Myanmar. Should this ambitious plan be implemented, then the resultant South Asian Silk Road would markedly decrease tensions between India and China, stabilize India’s restive Northeast and Myanmar’s rebellious periphery, and lay the groundwork for tangible development in this impoverished cross-border region. All of these benefits would advance multi-polarity within the four-country corridor and fortify its defenses against creeping uni-polarity, hence why the US has an important stake in sabotaging the project via its Rohingya manipulations.

Themistocles, a Greek writer, once said that, “he who commands the sea has command of everything.” It was Alfred T. Mahan, an American naval strategist who said in 1911: “Whoever controls the Indian Ocean dominates Asia…. in the 21st century the destiny of the world will be decided on its waves.” Since the end of Second World War, the Bay of Bengal and Indian Ocean regions have drawn immense global attention and been increasingly militarized by the great powers in order to defend their own interests. The US and China are the two main great players of geopolitical games in these regions. Now China, India and US growing military ambitions and maritime power building up in seeking the control of Indian Ocean have the potential to destabilize the region.