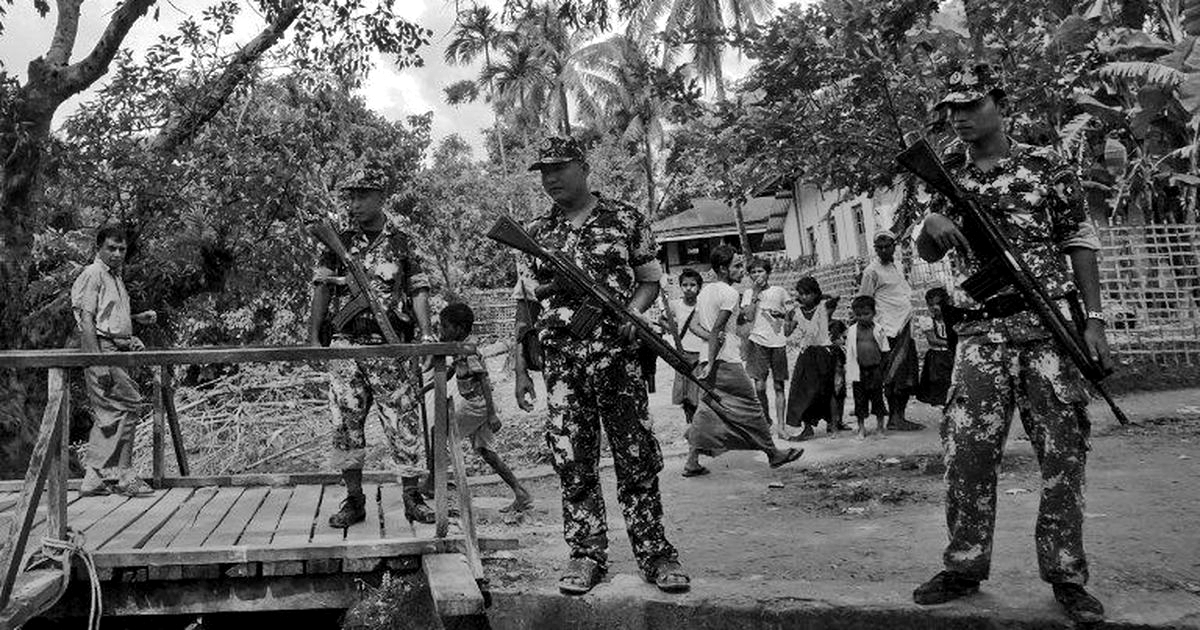 Across the last two thousand years, there has been great deal of local vibrancy as well as movement of different ethnic peoples through the region. For the last millennium or so, Muslims (Rohingyas) and Buddhists (Rakhines) have historically lived on both side of Naaf River, which marks the modern border with Bangladesh and Burma. In addition to Muslims (Rohingyas) and Buddhists (Rakhines) majority groups, a number of other minority peoples also come to live in Arakan, including Chin, Kaman, Thet, Dinnet, Mramagri, Mro and Khami etc.

The Muslims (Rohingyas) and Buddhists (Rakhines) had been peacefully coexisting in Arakan over the centuries. Unfortunately, the relation between those two sister communities began to grow bitter at instigation of the third parties, during the long colonial rule of more than two centuries. The anti-Muslim pogrom of 1942 has caused rapid deterioration in their relation.

General Ne Win was responsible for this anti-Muslim pogrom of 1942, who commanded the Burma Independence Army (BIA) troops from Bassein. The massacre resulted in a toll of 100,000 Rohingya, a large exodus of them and complete devastation of hundreds of large Rohingya villages and settlements throughout Arakan. These vacated lands or traditional Rohingya areas had been occupied or filled up with Buddhist Rakhines, causing serious demographic changes in complete disadvantage of the Rohingya community and their succeeding generations.

Same general Ne Win took over the power from the civilian government in March 1962 introduced a series of anti-Muslim laws. In 1974, the regime had taken a 20 year hidden plan to wipe the Rohingya off the soil of Arakan and launched several Immigration Operations of different categories including the one which is known as the ‘Sabe Operation’. During this operation periods tens of thousands of Rohingyas’ National Registration Cards (NRCs) were seized without any legal authority, on various pretexts which were never returned, for which hundreds and thousands of Rohingya were classified as foreigners alleging illegal immigrants from Bangladesh.

In 1975 about 3,500 Muslim Rohingyyas were evicted across the Naaf River. Bangladesh protested and representatives of both governments met in order to discuss the issues, but little progress was made in the talk.

In 1978, the government launched another anti-Rohingya military operation in the pretexts of checking illegal immigrant in the name of ‘King Dragon’. As a result, about 300,000 Rohingyas had sought refuge across the border in southern Bangladesh amidst widespread reports of army brutality, rape and murder. Under international pressure, Burma agreed to “take back” the Rohingyas in the repatriation agreement with Bangladesh, however 3 years later; the Burmese government passed the 1982 Citizenship Law, a legal instrument, which may make all the Rohingya illegal status. Since then the Rohingya lost all their rights and privileges.

The SLORC/ SPDC had taken another blue print of eleven points Rohingya extermination plan in 1988, as a continuation of BSPP’s 20 year plan. These are as follow;

1. To stop issuing citizenship cards to the Muslims of Arakan by branding them as insurgents.
2. To reduce the population growth of the Muslims by gradual imposition of restrictions on their marriages and by application of all possible methods of oppression and suppression against them.
3. To make every effort for the increase in Buddhist population to be more than the number of Muslim population by means of establishing Natala villages in Arakan with Buddhist settlers from different townships and from Proper Burma.
4. To allow their temporary movement from village to village and township to township only with Form 4 (which is required by the foreign nationals for travel), and to totally ban them travelling to Sittwe, the capital of Arakan State.
5. To forbid higher studies (university education) to them.
6. To stop appointing any Muslim in government services.
7. To ban their ownership of lands, shops and buildings, and any such properties under their existing ownership must be confiscated for distribution among the Buddhists. All their economic activities must be stopped.
8. To ban construction, renovation, repair and roofing of the mosques, Islamic religious schools and dwelling houses of the Muslims.
9. To try secretly to convert the Muslims into Buddhism.
10. Whenever there is a case between Rakhine and Muslim the court shall give verdict in favour of Rakhine; when the case is between Muslim themselves the court shall favour the rich against the poor Muslim so that the latter leaves the country with frustration.
11. To avoid mass killing of the Muslim, this may invite the attention of the Muslim countries.

In accordance with this blue print the SPDC/SLORC regime turned on eradicating the Rohingyas by way of destroying everything that is Muslim’s or Islamic in the whole of the country. They have been planned and systematic efforts by SPDC to make demographic changes in Arakan with increasing new Buddhist settlements and pagodas in the whole of predominately Rohingya zone of North Arakan, so that it looks like a Buddhist land. The Buddhist settlers have gradually marginalized and elbowed the age-old Rohingya villages out of their homes under the state patronage.

In the direct outcome of this plan, in 1991-1992 about 250,000 Rohingya have to cross the border into Bangladesh. Although many of these refugees have since then been repatriated to Burma, there are still just under 30,000 refugees living in two camps in southern Bangladesh. Moreover, there are also an estimated more than 200,000 Rohingya living illegally outside without access to protection or humanitarian assistance.

After the 1991-92 outflow of Rohingya, the SPDC changed its strategy and engineered a new tactic of slowly and steadily pushing the Rohingya from their homeland, using all sorts of physical abuse and economic obstacles. The SPDC has declared Rohingya as non-nationals rendering them stateless. They have become the worst victims of systematic, persistent and widespread human rights violations in Burma, including denial of citizenship rights, severe restrictions on freedom of movement, education, marriage and religion, forced labour, rape, land confiscation, arbitrary arrests, torture, extra judicial killings and extortion on daily basis.

Burma began its political transition from authoritarianism to democracy in 2011 and anti-Rohingya campaign began to intensify in November in the same year. Since then the nationalists have mobilized Buddhist Burmans for their campaign against the Rohingya by presenting Arakan state as the western gate of Buddhist Burma against ‘flooding’ Muslims from Bangladesh. A radical Buddhist groups have characterized the Muslims as “a most dangerous and fearful poison that is severe enough to eradicate all civilization.” Citing Adolf Hitler, a Rakhine political party has said that crimes against humanity, even the Holocaust, are justified “in defense of national sovereignty” and “survival of a race.”

Over the past two years, Muslim communities across Burma have suffered horrific violence, whipped up by hate speech preached by extremist Buddhist nationalists. Every aspect of their lives, including marriage, childbirth and ability to work, is severely restricted. Their right to identity and citizenship is officially denied. They have been systematically uprooted, with 200,000 held in internal displacement camps and unknown thousands have taken to sea as refugees. The UNHCR estimates that more than 86,000 people have left the area by boat from the Bay of Bengal since June 2012. The government even denies humanitarian agencies unfettered access in their internal displacement camps. Their homes, businesses, and mosques have been destroyed. Amid the destruction, many Rohingyas have been unfairly imprisoned, with some tortured to death while behind bars.

The most disturbing statement came from President Thein Sein who announced that the “only solution” was to send Rohingya to other countries or to refugee camps overseen by UNHCR. UNHCR promptly rejected the proposed plan.

From June 2012 to July 2013, the violence has left more than 200 people dead and displaced about 150,000 more, mostly Muslims. Violence also has spread to other parts of Burma.

Since then, the Rohingya have been backed into a corner, their lives made so intolerable that tens of thousands have fled by sea, seeking safety and a sense of dignity elsewhere. Surviving the perilous journey to Bangladesh, Thailand or Malaysia is, too often, seen as the only way to finally be free from persecution.

According to the leaked out information from the Nepyedaw HQs, on December 2013, a closed door meeting was convened at the Resident of Ex-Senior General Than Shwe. The meeting was presided by Than Shwe himself and attended the President and Vice-Presidents, the army chief and vice chiefs; the Chairmen both of the Houses, Minister for Home Affairs, Minister for Border area and Devolvement Affairs, the Chief Justice and the Attorney General.

Objects of the meeting are;
• To counter to the political activities of the opposition parties,
• To stop the progress of the Constitutional reform,
• To win in the 2015 national election.

Proceedings of the meeting;

1. To stir the public up for the fresh conflicts in Thandaw, Kyauknimaw, Kyaukpyu, Buthidaung and Maung Taw townships during April and May 2014.
2. To ease the International pressers make false fabricated propaganda that the Muslims were the first who ignite the problems.
3. To evade the witnesses, make public protests against the NGOs and INGOs in Arakan from January 2014 in order to leave the country. Everything should be prepared in advance.
4. To persecute and jail by framing artificial allegations to the leaders and activist of the Muslims. To arrange fake witness for the persecution. 969 groups shall arrange such witness in advance. To give up to 1 million Kyat to a witness and 5 million Kyat to the Judge who has sentenced the Muslim. To dismiss two cases in ten cases.
5. To arrange public movement in protest of constitutional reform by the National and Religion Safe-guarding Association/Ma-Ba-Tha.
6. To arrange counter public meetings by 969 groups on the way of opposition leader’s tour for constitutional reform and to convince the people not to participate in these activities by hook or by crook.
7. To make disturbance and public uproar by 969 groups along her (Daw Aung San Su Kyi) constitutional reform tour. To frame with false allegations of serious crime to the members of her party and try to decline public support to her. To make disorder to her public gatherings. In this purpose the 969 groups can use up to 10 million Kyat per township.
8. To infiltrate by undercover trained agents into the political parties and social networks groups of Rakhine in order to make them involve unlawful activities. To charge the Rakhines for these activities and say no to the Federal facility and any share from the natural resources.
9. To push the MPs and political leaders of Rakhine by give special facilities in order to make them terrorists, ultra nationalist and Nazis in eyes of International communities.
10. To spread with fabricated news that Muslims are trying to establish an Islamic State in Arakan with the help of Taliban and Alqaida groups in order to decline the support of US and UN to them.
11. To arrest and jail the Rakhine political leaders and activists for charge of terrorizing Muslims in Arakan and the Muslims leaders and activists in linking of International terrorist organizations, from September 2014.

It is one hundred percent clear that, the movement to create violence against the Rohingya is an attempt to influence the elections in 2015. The bulk of the current government is leftover legacy from the military regime and those with the most to lose with a real democratic transition. Attempting to draw Daw Aung San Suu Kyi into having to issue more direct support statements for the Rohingya, the dubious Thein Sein and his allies are trying to tap into pre-existing prejudice by the Burman/Bamar majority against non-Buddhist/non-Burman Burmese, particularly against the Rohingya, to turn the tide against the NLD.

They are also attempting to draw attention away from the failure to address real and extreme deficits in basic infrastructure, education, healthcare, or other fundamentals of governmental responsibility. It cannot be emphasized enough that this tactics are an affront to basic human rights and to any hope of continuing a real transition towards democracy or the protection of human rights.

Moreover the government is try to retain the Arakan under the military control by making all the Rohingyas stateless and all the Rakhines homeless, land less and effortless for total sold out of the whole Arakan to the Chinese for the money and security.